This article deals with the forest area and the district Dreilinden near Berlin. For further meanings, see Dreilinden (disambiguation) .

Dreilinden is the name of a forest in the southwest of Berlin . The name was subsequently transferred to a hunting lodge in what is now the Wannsee district and a colony in the area of ​​the Kleinmachnow community south of the Berlin city limits. Dreilinden also gave its name to the West Berlin checkpoint (also known as Checkpoint Bravo ) on the transit highway through the GDR .

Hunting lodge with Frederick Charles' personal booty in the foreground, the Hærulfstein . Drawing around 1880

In 1838 the inauguration of the Berlin-Potsdam railway took place , the route of which ran through the Dreilinden forest (main line); it runs there south of today's city limits parallel to this. In 1856 Bensch sold the forest for 70,000  thalers to the Berlin distiller Josef Aloys Gilka. That Bensch was attached to his estate is shown by the fact that in the purchase agreement he kept a grave behind the forester's house to himself - which can still be seen today. Gilka sold the property in 1859 for 95,000 thalers to the king's nephew, Prince Friedrich Karl of Prussia . In 1869, a master builder Nabbath built the hunting lodge near the forester's house in Swiss style with three linden trees that gave their name.

Fontane describes the Dreilinden hunting lodge , built in 1869 and the favorite place of residence of Prince Friedrich Karl, as a “princely villa” . "Everyone [...] knew the castle [...] from the court news, in which it was said at certain intervals: 'His Royal Highness came into town from Dreilinden today and returned there towards evening'". In his volume Five Castles (1889) Fontane devotes his own detailed chapters to Dreilinden and Prince Friedrich Karl.

Even better known than the prince himself is his Dreilinden round table, which took place at regular intervals in the hunting lodge. Between November 1881 and July 1882 Fontane was a guest at this round table, visited the hunting lodge and made notes on the furnishings for his five castles . With the prince's death, the round table also went out. From 1894 to 1900, his son Prince Friedrich Leopold sold around 600  acres to Heimstätten Aktiengesellschaft and then sold individual plots of 507  hectares to private individuals. He sold the rest of the land to the city of Berlin in 1927 for eleven million marks (adjusted for purchasing power in today's currency: around 40 million euros).

In April 1879 the Wetzlarer Bahn went into operation, which was given a station opposite the Wannsee station of the Wannsee Railway, which was named Dreilinden . A few years later, both train stations were merged into a single station under the name Wannsee .

In 1954 the hunting lodge was demolished and the Dreilinden district forester is located in its place . The tombstone of Friedrich (Wilhelm Heinrich) Bensch can also be found nearby.

With the formation of Greater Berlin in 1920, the part of the forest area north of the Königsweg came to the city of Berlin.

On March 11, 1909, the Dreilinden GmbH colony was founded and acquired 200 acres of forest on October 30, 1909 from the manor owners Georg and Dietloff von Hake. The purchased area was bordered in the north by the Berlin – Potsdam railway line, in the south by the Teltow Canal and in the east and west by lines that ran roughly parallel to the planned Wannsee – Stahnsdorf connecting line .

In 1913 the Terraingesellschaft started building the cemetery railway. The construction of the railway was completed on June 5, 1914 and the company was given 5000 marks annually  to pay the two railway officials. In the 1920s, the S-Bahn line was electrified. Later, a large transfer station was to be built at the meeting point between the main line and the cemetery line.

The area around the Dreilinden colony was a popular destination for Berliners. At that time there were therefore two restaurants, the train station restaurant and the Dreimäderlhaus located on the canal. The terraced society began parceling out in 1922. At that time Dreilinden was only a weekend settlement until the first permanent buildings were built in 1933.

The highway feeder of the Reichsautobahn  51 from the AVUS to the Berliner Ring was inaugurated in 1940 (now A 115 ). It led shortly after the Zehlendorf motorway junction through the Dreilinden forest and Parforceheide . The railway line towards Potsdam (main line) was shut down by the Red Army in 1945 after the Teltow Canal Bridge was blown up by the Wehrmacht . The tracks went to the Soviet Union as reparation .

In the London Protocol of September 12, 1944, the victorious powers agreed to divide the defeated German Reich and Berlin into sectors. Most of the forest remained in Berlin, the Dreilinden settlement was in the Soviet occupation zone . For the time being, there were no major restrictions at the border crossing. Control posts were interested in gatekeepers and hoarders. The Berlin blockade began on June 24, 1948, when the transit routes were blocked by the Soviets . Freight traffic via Dreilinden had to be stopped. The supply of Berlin was secured via an airlift . Only passenger traffic to the surrounding area was initially permitted. On May 12, 1949, the Berlin blockade ended. 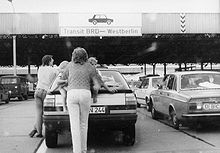 The control passage point (KPP) NOWAWES was opened on July 28, 1949 according to order no. 73/49 of President Fischer of the "German Administration of the Interior" (DVdI) of the Soviet occupation zone . The GDR was founded on October 7, 1949 . The KPP Nowawes was on October 23, 1950 KPP Drewitz renamed. It was located north of the Potsdam-Babelsberg motorway junction until 1969 , and after 1990 the area was redesigned to become the Am Stern and Parforceheide car park. The controls took place outdoors and in barracks. The West Berlin control point Dreilinden was in the Albrechts Teerofen settlement south of the Teltow Canal. On August 13, 1961, the isolation of West Berlin by the GDR began. The border installations were significantly expanded. Construction of the wall began in Berlin . The S-Bahn line Wannsee –Dreilinden– Stahnsdorf was closed and later dismantled.

By October 1969, the GDR had laid out a new motorway route in order to be able to end the uncontrolled passage through GDR territory between the Dreilinden control point and finally reaching West Berlin at the Königswegbrücke . The GDR checkpoint Drewitz was relocated to the newly created section of the motorway in the municipality of Kleinmachnow , but kept its name. The West Berlin control point Dreilinden, previously located on the motorway bridge over the Teltow Canal near Albrechts Teerofen , was relocated to the motorway section immediately north of the border at the Königswegbrücke. The Americans established the offices of the Allied Checkpoint Bravo on a bridge over the barriers, directly over the highway. By 1970 5.9 million people and around 2.5 million motor vehicles had passed through Dreilinden. At the beginning of the holiday, 2000 to 2200 cars were dispatched to the west and around 2400 cars to West Berlin per day. There were also around 140 trucks and 25 buses in each direction.

On November 9, 1989, the inner-German border was opened . Thousands of vehicles with citizens of the GDR passed through Dreilinden uncontrolled. On November 10th at 12:30 am , the border crossing point was opened for all GDR citizens on the basis of a telephone order to the train driver in Drewitz (GDR), Major Meike . The onslaught over Dreilinden reached record levels. In July 1990 the Dreilinden checkpoint in West Berlin was closed. On the site of the former Drewitz border crossing point, the Europarc Dreilinden with commercial buildings and hotels , including the eBay headquarters in Germany.

After German reunification , areas in the Brandenburg area in the border strip, in the area of ​​the old motorway to the Teltow Canal, were transferred to the Berlin forests and are again managed by the Dreilinden forestry department.

Both the Dreilinden elementary school and the Dreilinden grammar school are located directly behind the Zehlendorf motorway junction. Both were opened as high school in 1939 and officially separated into their current form in 1978.