This article describes the chronicler. For the bishop of the same name, see Cosmas (Prague) . 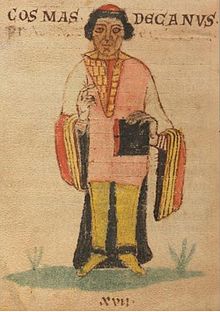 Cosmas of Prague. Illustration from the Leipzig manuscript of the Chronica Boemorum, late 12th century.

Cosmas probably came from a wealthy Prague family, from which numerous priests emerged. His year of birth is unknown. After training in Prague, he studied grammar and dialectics from 1075 to 1086 with Magister Franko in Liège . He was married to Božetěcha and had a son Heinrich. In some sources it is assumed that the son is identical to the Olomouc bishop Heinrich Zdik .

After his return from Liège, Cosmas became a canon at the Prague Cathedral Chapter . At the end of 1091 he accompanied the newly elected bishops Cosmas of Prague and Andreas von Olmütz to the royal investiture in Mantua . The identity of the name with the Prague bishop is coincidental; However, it led to the fact that the Bishop Cosmas and the chronicler Cosmas were confused several times in the sources. In 1094 Cosmas accompanied the two aforementioned bishops to their episcopal ordination in Mainz .

In 1099 he stayed in Hungary with the Prague bishop Hermann . There he met the Gran Archbishop Seraphim know. Cosmas was ordained a priest from this, although he was married. In principle, this was possible if he no longer lived with his wife and adhered to celibacy , which was only enforced in 1139 at the Second Lateran Council .

Cosmas, who was one of the most intellectually significant personalities in Bohemia, is known to this day through the Chronica Boemorum he wrote from 1119 onwards , which includes the history of Bohemia in three volumes up to Cosma's death in 1125. The history of the early Bohemian period, which is authoritative to this day, was shaped by the chronicle.