from Wikipedia, the free encyclopedia
Battle of Leuthen
Part of: Seven Years War

The Battle of Leuthen took place on December 5, 1757 during the Seven Years' War near Leuthen in Silesia. In it the Prussian King Friedrich II defeated the Austrian army under the leadership of Prince Karl Alexander of Lorraine .

Frederick's campaign plan for 1757 had planned to quickly defeat the main opponent Austria in Bohemia , so that this could not get any help from France and Russia . After several defeats, Friedrich found himself in a defensive position in the autumn of 1757, until he was able to surprisingly win an overwhelming victory over a French and an Imperial Execution Army in the Battle of Roßbach on November 5, 1757 and drive them out of Thuringia . From there Friedrich moved to Bohemia and on the way united his troops on December 2nd with the remnants of the "Silesian Army" under his brother-in-law, Prince August Wilhelm von Braunschweig-Bevern, who were defeated in the Battle of Breslau on November 22nd was. Friedrich's goal was to regain possession of the strategically and economically valuable province of Silesia , especially its capital, Wroclaw , through a targeted advance . He explained the paramount importance of this goal in an address to his generals shortly before the battle in the field camp in Parchwitz . In operational terms, Friedrich wanted to deny the troops of Karl Alexander the winter quarters in Breslau.

Area map of the battle of Leuthen

Near Leuthen the numerically far superior Austrians took up a position almost nine kilometers wide and let the Prussians move across. Friedrich himself estimated the number of his opponents at 39,000 men. The battlefield was open, flat terrain with hills to the west.

Friedrich initially had the left wing of the Prussian army carried out mock attacks, whereupon Karl Alexander ordered his reserves to this point. Friedrich then had his right wing, hidden behind hills and not even noticed by the Austrian Enlightenment, march south as the main power. South of the left Austrian wing and south-south-west of Leuthen, the Prussian army swung into a crooked order of battle . The right wing was by far the strongest part of the army: the cavalry under Hans Joachim von Zieten was deployed there, protected by three battalions as preliminary meetings and supported by a battery of twelve-pound cannons. The majority of the infantry meanwhile formed the left wing and was supposed to intercept the Austrian counterattack. With this formation, Friedrich succeeded in gaining superiority at a crucial point on the battlefield despite being outnumbered. In addition, he had the advantage of being surprised by the covert movement of his troops, and the Prussians succeeded in the further course of the then still unfamiliar maneuver of changing the position of the artillery during the battle. Around noon, Friedrich had his right wing attack the Austrian south wing, which was grouped near the village of Sagschütz .

Battle of Leuthen: The Austrians (red) have bent their left flank backwards to protect the flank. The Prussian Army (blue) is attacking this flank and has set up troops on the sides to protect its own flank between their meetings

When the assault on the left wing of the Austrians began, their front was torn apart by the fragmentation in the north in such a way that even the resistance of some cavalry units under General Franz Leopold von Nádasdy could not prevent the surprising and massed advance of the right Prussian wing. The Austrians retreated as far as Leuthen while they tried to build a new front against the Prussian attack. Only shortly before the local border could they intercept the Prussian advance in a straight line of battle, but were pushed back further into the built-up area. After the breakthrough of the third battalion of the Guard under Captain Wichard von Möllendorff against the tenaciously defending regiment of the Prince-Bishop's Würzburg Imperial troops in the churchyard of Leuthen, the Austrian cavalry general Joseph Count Lucchesi d'Averna wanted to turn the battle by using around 70 squadrons to turn the supposedly uncovered left flank attacked by the Prussian infantry. However, this attack was used by the Prussian Lieutenant General Georg Wilhelm von Driesen , who until then had kept his left Prussian cavalry wing, consisting of 50 squadrons, covered. Without a higher order, he pushed into the uncovered right flank of the advancing Austrian cavalry at 5 p.m. Lucchesi's squadrons were pushed against their own infantry, which at the same time was under a Prussian bayonet attack. This process led to the final dissolution of the Austrian order of battle, whereupon Lorraine lost the battle and left the field. When the Austrians withdrew, they again suffered considerable losses because Friedrich had ordered severe persecution. On December 9th, he wrote to Reiterführer Zieten: One day of fatigue [French: exertion] in these / circumstances My dear Ziten / always brings us the enemy in the Hessian sat down [meaning: kept on his heels during the following 100 days of rest / only ].

Prince Moritz von Anhalt-Dessau , who had led the army together with Friedrich, was appointed Field Marshal General on the same evening .

The victory column near Heidau

To commemorate the victorious battle of Leuthen against the Austrian army, King Friedrich Wilhelm IV had a victory column with a gold-plated Victoria built near Heidau . The Berlin architect Friedrich August Stüler provided the draft for the memorial ; the goddess of victory was created by Christian Daniel Rauch . The victory column was created in the workshop of the sculptor Heinrich Menzel from Neisse from white-gray Guhlauer granite. The capital and the Victoria led Moritz Geiss in zinc cast off; the Victoria was also gilded for its better effect. The total height of the monument was 64 feet. After the Second World War the column was blown up. 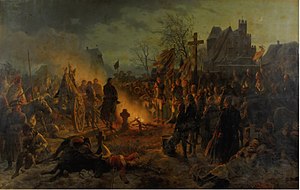 Wilhelm Camphausen : The chorale on the evening of the Battle of Leuthen .

Numerous anecdotes about what happened near Leuthen have become famous. The scene towards the evening of December 5th, when Frederick the Great, initially without sufficient cover , wanted to move into night quarters in the castle near Deutsch-Lissa, overcrowded with Austrian officers, belongs clearly to the realm of legend ; instead of capturing him as an enemy, the Austrians would have paid him their reverence and gone quickly to their soldiers in the village.

After the battle, the 25,000 exhausted fighters of the Prussian army camped and sang the evangelical chorale “ Nun danket alle Gott ”, which went down in history as the “Choral von Leuthen”.

The battle was filmed as Der Choral von Leuthen in 1932 by director Carl Froelich based on a script by Johannes Brandt . The military march composed for the film by Marc Roland found its way into German military music as “Der Leuthener” .