from Wikipedia, the free encyclopedia
Siege at Pirna
Part of: Seven Years War 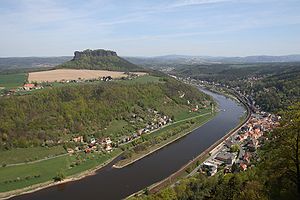 The evenness of the Lilienstein , the place of the Saxons surrender
Seven Years War (1756–1763)
Eastern theater of war

The siege of Pirna with the dissolution of the Saxon army gave the starting signal for the Seven Years' War , which subsequently took place without the Electorate of Saxony , but often on its territory.

On August 29, 1756, shortly after noon, Prussian troops crossed the Saxon border in three columns. The Saxon generals had already made the plan weeks beforehand to accommodate their army in two camps near Meißen and Pirna . While the Prussians were still pretending that the troops would march through to Bohemia, Brühl had the army moved to the camp near Pirna. The Prussians found most of the cities without a garrison, as they were able to save themselves shortly beforehand.

The soldiers should pack enough food for two weeks. It was planned that they would move into the camp near Pirna on September 2nd and march on to Austria the following day to unite with the Austrian troops of General Browne. But the Austrian Empress Maria Theresia hesitated because she feared an open declaration of war by Prussia. The elector went to Königstein fortress . His family stayed in Dresden.

Plan of the Saxon and Prussian camp near Pirna

On September 2nd it was decided to stay longer in the camp near Pirna. Therefore, from September 3rd, the rations for humans and animals alike were reduced.

By September 10, the Prussian troops had closed the siege ring. For this purpose, they also built a pontoon bridge at Heidenau , downstream from Pirna and Schandau . In addition, two squadrons of the Prussians each occupied the places Zehista and Hellendorf in order to control the Nollendorfer Pass over the Eastern Ore Mountains to Bohemia and to intercept couriers.

Despite the siege, however, the position of the Saxon elector was accepted, so that food and couriers were allowed through to him and he could continue to act appropriately.

Plan of the siege at Pirna

The Saxons stayed in their camp until October 11th, there were only harmless outpost skirmishes. In the meantime the Austrians had advanced to Mittelndorf , where the Saxons were expected to fail on October 12th. The date was postponed several times because it was problematic to transport the pontoons. There is evidence of heavy rains from October 11th to October 13th. An eyewitness reports: “We spent seventy two hours, 48 ​​of which it rained incessantly, in the open air and with rifles without bread or food. Few were left with other food than the roots of long-eaten fruit, boiled powder salted with powder, refreshment and wood the horse's fodder. ”The pontoons could only be moved with difficulty by the completely exhausted horses, tore up the sodden ground and came arrived late in Thürmsdorf . The pontoniers and engineers of the Saxon army built the bridge directly at the mouth of the valley near Thürmsdorf.

On the morning of October 12th, the Saxons began marching to the bridge in two columns. The aim was to break through the Prussian positions on the flatness at Lilienstein, to stand in the way of the Prussians who were advancing from Pirna and to wait for the union with the Austrians. The departure was noticed by Prussian patrols a few hours after the Saxons broke up, so that 12 Prussian battalions began their pursuit from Langenhennersdorf. The Saxons' guns, drawn by soldiers, tore up the rest of the way. Some had to be left behind. Until the early hours of the morning it was only possible to cross 200 grenadiers and nine light field guns across the Elbe. These were able to successfully defend themselves against smaller Prussian units.

On the morning of October 13th, 7 battalions of grenadiers were finally able to cross over, and the Prussian entrenchments were reinforced by 12 battalions. In the evening the bridge finally fell. Until then, two squadrons of infantry, four brigades of cavalry and two other brigades of infantry of the Saxons had managed to cross the Elbe. The rest of the army remained on the left bank of the Elbe.

Surrender of the Saxons and incorporation into Prussian ranks

The Elector of Saxony, Friedrich August II, allowed his army under Field Marshal Friedrich August Rutowski to surrender on October 16. The condition was then "not to use the weapons against us and our friends."

In the following days, contrary to the surrender agreements, the Saxon troops were sworn in on Prussia and incorporated into the Prussian lines. Of the 658 officers, however, only 51 “unstable elements” were persuaded to convert, the rest were taken prisoner. The teams and NCOs had to go to an open field and were surrounded by Prussian troops. There they had to swear the oath on Prussia. Units that refused were mistreated and given no food. 14,000 Saxon soldiers came into Prussian service, at least temporarily. Most of these regiments were disbanded in 1757. The Saxon soldiers also deserted in large numbers and gathered in new regiments, which then fought against Prussia under Austrian leadership.