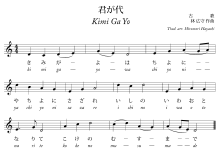 Notes of the national anthem 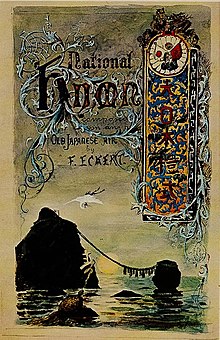 Cover draft by Curt Adolph Netto from 1880 for the score of the Japanese national anthem arranged by Franz Eckert.
sung recording from the 1930s

A Sazare Ishi ( 細 石 ), a rock made of stones, in the Shimogamo shrine

The Kimi Ga Yo ( Japanese 君 が 代 ) is the national anthem of Japan .

The text is based on a tanka , a Japanese short poem by an unknown author , in the anthology Kokin-wakashū published in 905 . This early form shows a slightly different beginning than the text used today, which first appeared during the Kamakura period in print editions of the song collection Wakan rōei-shū compiled by Fujiwara no Kintō . The verses initially used at court at the turn of the year have gradually been used as a general good luck song since the Kamakura period. At the same time they were printed in all sorts of variations in song collections. During the Edo period they spread further, appearing in short stories, ship and dance songs, ballads and puppet show libretti .

The use as the text of the national anthem goes back to the lyrical captain and later army minister and field marshal Ōyama Iwao , who took up a suggestion from the British military musician John William Fenton stationed in Yokohama . The melody proposed by Fenton was the first attempt to combine Japanese and Western music, but it was only used until 1876. Around this time there were still two anonymous versions in the style of Buddhist recitations and one version for school use with wagon accompaniment . In 1876, the naval musician Nakamura Suketsune ( 中 村 祐 庸 ) made another suggestion. In 1880 Hayashi Hiromori ( 林 広 守 ) arranged a more solemn melody conceived by the court musician Oku Yoshiisa ( 奥 好 義 ), who was subordinate to him , for which the Prussian military musician, Fenton's successor as head of the naval band, Franz Eckert, developed western instrumentation . This version was first performed on November 3, 1880 on the occasion of the emperor's birthday. In 1914, the Japanese Navy incorporated this version into its ceremonial regulations. Since then, the text and melody have been considered the de facto national anthem.

Since after the Second World War the people became the new sovereign of the country, there were violent disputes over the use of the text. In 1950, the Minister of Culture, Amano Teiyū , issued an informal statement in favor of the use of the Hinomaru flag and the Kimi Ga Yo in schools. In 1958 this position was added to the curriculum ( Gakushū shidō yōryō ). Fierce fighting followed, especially with the Japanese teachers' union Nihon Kyōshokuin Kumiai, over the flag- raising and singing of Kimi Ga Yo at the beginning of the school year and at graduation ceremonies . This has been mandatory in schools since 1989, but it was not until 1999 that the Kimi Ga Yo, together with the Japanese Hinomaru flag, was declared a national symbol of Japan by law.

National anthems of the states of Asia