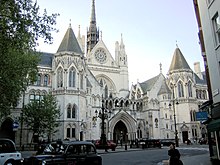 Royal Courts of Justice , courthouse in London which also houses the High Court of Justice

He handles all major and important cases in the first instance and also oversees all lower courts and many tribunals . Appeals against High Court judgments in civil cases are made to the Court of Appeal (civil division) and then to the Supreme Court of the United Kingdom .

Originally the High Court consisted of five divisions: King's and Queen's Bench , Common Pleas , Exchequer , Chancery and Probate, Divorce and Admiralty . In 1880 the Common Pleas and Exchequer departments were abolished, leaving three departments. The Probate, Divorce and Admiralty Division was renamed the Family Division by the Administration of Justice Act 1970 and its jurisdiction reorganized accordingly.

All male judges are promoted to Knight Bachelor ; the judges are made Dames Commander of the British Empire .

The High Court is divided into three divisions, the Queen's Bench Division , the Chancery Division and the Family Division . There is also the Senior Courts Costs Office , which is responsible for assessing court costs.

The Queen's Bench Division judges , together with the Circuit Judges , also exercise criminal jurisdiction when sitting in the Crown Court . In addition, the divisional court hears appeals of appeals from magistrates' courts and from crown courts that have already heard appeals from magistrates' courts . All claims for judicial review of administrative decisions or decisions of lower courts will be heard by a Queen's Bench Judge or a departmental court. Appeals from the High Court in civil matters lie with the Court of Appeal , the civil division, in criminal matters exclusively with the Supreme Court of the United Kingdom .

Subdivisions of the Queen's Bench Division include the Commercial Court , Admiralty Court and Administrative Court , where claims for judicial review are heard.

The Chancery Division deals with business law, antitrust law, will law and property law relating to equity . In addition, a special department deals with intellectual property law and corporate law . The chancery division is chaired by the vice chancellor.

The Family Division is comparatively modern, as it arose from the merger of the Admiralty Court and the succession courts to form the Probate, Divorce and Admiralty Division , hence the High Court 's division of succession, divorce and maritime law ; also known colloquially as Wills, Wrecks and Wives .

The Oversight Role of the High Court and District Judges

Historically in England the monarch is the source of all justice. All judges exercise justice on his behalf, which is why all judges have the royal coat of arms behind them. State law enforcement is generally carried out on behalf of the monarch. Historically, local lords were permitted to hold courts in manorial courts and in other ways. It was inevitable that the jurisdiction exercised was very patchy and grievances were addressed directly to the king. Traveling commissioners of the king, whose main purpose was to collect taxes, acted on behalf of the king to unify the administration of justice. The tradition of traveling judges to remote areas of the country, known as circuits , continues to this day, hearing cases in the District Secretariats of the High Court .

The supreme authority of the Queen's Bench over the lower courts and authorities is also exercised on behalf of the monarch. In general, anyone may appeal a lower court or authority's decision and seek a judicial review with the Queen's Bench Division , unless other remedies are provided by law. There is a special procedure for this in the Administrative Court of the Queen's Bench Division : First, a single judge decides on the admission of the claim in order to weed out unreasonable and hopeless cases. After the lawsuit is admitted, there will be a full legal hearing. This is not a jury matter. Appeals go first to the Court of Appeal (Civil Division) and then to the Supreme Court of the United Kingdom , or in criminal cases directly to the Supreme Court of the United Kingdom .