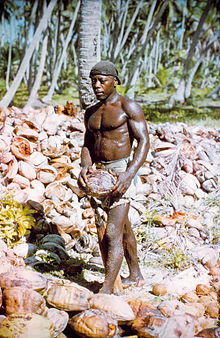 The Chagossians (also: Chagossier , Chagos-Insulaner ; in their language Sagosia ) or Îlois (in their language "islanders") are an ethnic group of mixed Malagasy , Mozambican , Indian and French ancestry who lived from the end of the 18th century up to their forced resettlement in the late 1960s on Diego Garcia and other islands of the Chagos Archipelago . Today, thousands of people of Chagossian descent live mainly in Mauritius as well as in Great Britain and the Seychelles .

Their language is the French-based Creole language Chagos Creole .

In 1783 the influential sugar and coconut plantation owner Pierre Marie Le Normand from Mauritius received a concession from the then French colonial power to build a coconut plantation on the uninhabited island of Diego Garcia. A year later, a ship brought 79 Mozambican and Malagasy slaves, some skilled free black workers and building materials for the plantation to the island. 1790–1810 three more coconut plantations and a fishing settlement - also operated with slave labor - were built. Plantations were also built on other islands in the Chagos Archipelago and slaves were imported.

At the beginning of the 19th century, the Chagos Archipelago came under British colonial rule and was annexed to the Mauritius colony. In 1826 the population consisted of 375 slaves, nine whites, 22 free colored people and 42 lepers . Most Chagossians immigrated after the abolition of slavery in 1835 as fishermen, farmers and coconut plantation workers. In particular, contract workers from India came to the islands and mingled with the already resident population, most of whom converted to Catholicism. By 1880 the population of the Chagos Archipelago had grown to around 760.

The Chagossians were largely cut off from the outside world, as regular ship connections existed just two or three times a year, bringing supplies, transporting residents and immigrants and taking copra and coconut oil for sale in Mauritius. This changed for a few years when, in 1882, a coaling station for steamship lines through the Indian Ocean was built on Diego Garcia. By 1888, more workers came from Somalia, England, Greece and Italy, and ships from Australia and Europe regularly docked. When the station closed due to financial problems in the late 1880s, the Chagos Islands returned to their isolation. During the isolation, the French-based Chagos Creole developed as the Chagossian language, which is related to the Seselwa and the Morisyen .

Mauritius gained independence in 1965 while the Chagos Islands became British Indian Ocean Territory . The following year, Great Britain leased the archipelago for 50 years to the United States, who set up a military base on Diego Garcia. For this purpose, the islands were declared a restricted area and the then 1500 to 2000 Chagossians were forcibly resettled to Mauritius and the Seychelles between 1967 and 1973 . In Mauritius, the resettled often found precarious living conditions. According to various sources, 5,000 to 8,000 people of Chagossian descent live there today, mainly in slums near Port Louis . Others live in the UK or the Seychelles.

Flag of the Chagossians

Legal dispute over the right of return

To this day, Chagossians fight for their right to return in British and international courts. In 2000, a British court ruled them, but this had no consequences. In 2002, Foreign Secretary Jack Straw signed a document granting Chagossians British citizenship. In 2003 the High Court ruled in a controversial ruling that the Chagossians were not entitled to any compensation from Great Britain. In 2004, Queen Elizabeth II issued an Order-in-Council that banished the Chagossians from their homeland. In May 2006 the High Court of Justice declared this order-in-council to be unlawful. This in turn was challenged by the government and taken to the Court of Appeal . In February 2007, the President of Mauritius threatened to resign from the Commonwealth in protest against the "barbaric" treatment of the Chagossians . In May 2007 the Court of Appeal ruled in favor of the Chagossians. The government continued to appeal to the House of Lords , which ruled against the Chagossians in 2008. Against this, an action was brought before the European Court of Human Rights . At the end of 2012, the European Court of Human Rights ruled that it had no jurisdiction over the Chagossian case. In early 2013, the Chagossians filed a lawsuit against the United Kingdom at the International Court of Justice in The Hague.

In April 2006 a group of 100 Chagossians were able to visit the Chagos Archipelago at the expense of the British Foreign Office .

The lease agreement with the USA for the Chagos Archipelago was extended in 2016 by twenty years until 2036.