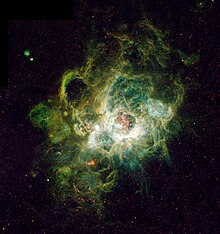 NGC 604 , a large H-II region in the Triangle Nebula

An H-II region (pronounced Ha two , H for hydrogen) is an interstellar cloud of glowing gas with a diameter of sometimes several hundred light-years , in which the star formation takes place. Young, hot, blue stars formed by local compressions in this gas cloud emit large amounts of ultraviolet light, which ionizes the nebula around them .

In H-II regions, thousands of new stars usually form over a period of several million years. In the end, however, stellar winds from the most massive stars or isolated supernova explosions lead to the gas in the H-II region being dispersed. What remains is an open star cluster like the Pleiades visible in the winter sky .

H-II areas get their name from the large amount of ionized atomic hydrogen (a plasma state made up of individual protons ) they contain, whereas HI areas contain atomic, non-ionized hydrogen and molecular hydrogen (H 2 ). H-II areas can still be perceived in the universe from very great distances. Therefore, the study of extragalactic H-II areas is helpful in determining the distance and chemical composition of the other galaxies .

Some H-II areas are so bright that they can be seen with the naked eye . However, they received little attention prior to the invention of the telescope in the early 17th century. Even Galileo took no notice of the Orion Nebula as he observed the star cluster embedded in it . Before that, this nebula was cataloged by Johann Bayer as a single star, θ Orionis. The French observer Nicolas-Claude Fabri de Peiresc is credited with identifying the object as a nebula in 1610 . After that, many more H-II areas were discovered in and outside of our galaxy.

Wilhelm Herschel was the first astronomer to compile a comprehensive nebula catalog . He observed the Orion Nebula particularly closely in 1774 and described it as a “shapeless, glowing nebula, the chaotic material of future suns”. Confirmation of his hypothesis had to be a hundred years away. Only William Huggins and his wife Margaret Lindsay Huggins aimed their spectroscope specifically at different nebulae. Some, like the Andromeda Nebula, had star-like spectra and appeared to be made up of hundreds of millions of individual stars. However, this was not the case with other "nebulae". Instead of continuously superimposed absorption lines , objects like the Orion Nebula showed some emission lines . The brightest had a wavelength of 500.7  nm , unrelated to any known chemical element . At first it was thought to be an as yet unknown element called nebulium . A similar consideration led to the discovery of helium in 1868 when the spectrum of the sun (Greek Helios ) was analyzed.

Although helium was detected in the solar spectrum shortly after its discovery on Earth, nebulium was not found. It was not until the 20th century that Henry Norris Russell suspected that the wavelength of 500.7 nm did not come from a new element, but from an element already known in unknown states.

In the 1920s, physicists showed that such gas clouds had an extremely low density . Because electrons can reach metastable energy levels in the atoms and ions , which otherwise - at higher densities - can hardly exist for long due to the constant collisions. Electron transitions in the doubly positively charged oxygen ion lead to a 500.7 nm wave. Such spectral lines , which can only be observed in gases with very low densities, are called forbidden lines . Astro- spectroscopic measurements have also shown that the nebulae consist of extremely dilute gas.

In the early 20th century, it was noticed that the H-II regions contain mostly hot bright stars. These have many times our solar mass and are the shortest-lived stars with only a few million years of lifespan (for comparison: our sun lives around 10 billion years). It was soon assumed that new stars were forming in the H-II regions: over a period of several million years, a star cluster formed from an H-II region before the stellar wind from the hot young stars dispersed the nebula. The Pleiades are an example of such a cluster that has already largely blown away the H-II gas nebulas from which it was formed. Only a small remnant of them remained as reflection nebulae .

When stars form in a giant molecular cloud, the most massive of them will reach temperatures sufficient to ionize surrounding gas. Shortly after the ionizing radiation field is created, high-energy photons generate an ionization front that propagates through the surrounding gas at supersonic speed. The further this front moves away from its star, the more it is slowed down. The pressure of the gas that has just been ionized causes the ionized volume to expand. Eventually, the ionization front reaches subsonic speed and is overtaken by the shock front of the ionized mist. This is the birth of an H-II area.

An H-II area persists for a few million years. The star wind from the hot young stars pushes away most of the gas from the nebula. Overall, the process appears to be very inefficient. Less than 10% of the gas in an H-II region is used to form new stars while the rest is blown away. The supernova explosions of the most massive stars, which occur after 1 to 2 million years, make a further contribution to the loss of gas.

The birth of a star in an H-II region is obscured by thick clouds and dust around emerging stars. The star becomes visible only when the star wind blows its “cocoon” away. The dense regions of nebula that contain the stars are often seen as shadows from the rest of the ionized nebula. These dark spots are called globule ( Engl. Bok globules) after astronomer Bart Bok , who proposed in the 1940s that they are the birthplaces of stars.

Bok's hypothesis was confirmed in 1990 when infrared observations penetrated the thick dust and revealed young stars. Today it is assumed that a Bok globule has about ten times the mass of the sun, which is distributed over a diameter of about one light year. Usually a formation of a double or multiple star system arises from it .

Depending on the size of the H-II area, they can contain up to several thousand stars. This makes it more complicated to understand H-II areas than, for example, planetary nebulae that have only one central ionization source. Mostly H-II areas have a temperature of around 10,000 K.

The constant recombination to neutral hydrogen (and renewed ionization ) creates a characteristic line emission. Such areas are therefore part of the emission nebulae . Hydrogen has a relatively low ionization energy. But because 90% of the interstellar matter consists of hydrogen, many nebulae shine brightest in the red characteristic of hydrogen at a wavelength of 656.3 nm, the so-called H-α line of the Balmer series .

Further lines in the visible range are Hβ at 486 nm, Hγ at 434 nm and Hδ at 410 nm. The proportions of these normally weaker lines vary depending on the pressure and temperature in the fog.

The color of the total light of an emission nebula can shift to pink as a result, as for example with the comparatively very dense protuberances of the sun . Conversely, this so-called Balmer decrement can be used to determine pressure and temperature.

The remaining part of an H-II area consists of 10% helium . The heavier elements only make up a very small fraction. It has been found that in our galaxy the amount of heavy elements decreases the further the distance of the H-II region is from the center of the galaxy. This is due to the fact that more star formations form in centers of greater density, and so the interstellar matter is more enriched with the reaction products of nuclear fusion . 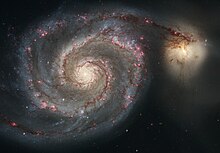 The reason they are absent from elliptical galaxies is that they are created by galaxy merging, which is common in galaxy clusters . When galaxies collide, the individual stars rarely collide with each other - in contrast to the much larger molecular clouds and H-II regions. The resulting gas clouds are converted into stars relatively quickly and almost entirely. Galaxies that go through such a rapid star formation process are called starburst galaxies .

H-II regions also exist outside of galaxies. These H-II intergalactic regions appear to be remnants of the destruction of smaller galaxies .

H-II areas come in different sizes. Each star ionizes a roughly spherical area. However, the combination of ionized spherical spaces from different stars and the heating of the nebula lead to complex shapes. Supernova explosions also affect an H-II area. Sometimes the formations of a large star cluster lead to the hollowing out of the H-II region from within. That is the case with NGC 604 , a gigantic H-II area in the Triangle Nebula .

The most famous H-II region in our galaxy is the Orion Nebula . It measures about 30 light years in diameter and is 1,400 light years away. The nebula is part of a giant molecular cloud, the central part of which can already be seen with bare eyes. If it were visible as a whole, it would fill most of Orion . The smaller Horsehead Nebula and Barnard's Loop are two other luminous parts of this vast gas cloud.

NGC 604 is even larger than the Tarantula Nebula and around 1,300 light years across, although it contains hardly any stars. It is one of the largest H-II areas in the Local Group .

The Orion Nebula can be seen in the optical spectrum as a gas and dust cloud. The infrared image on the right reveals the stars that were born in it.

As with planetary nebulae , some elements in H-II areas are difficult to identify . There are two ways here that start from different types of spectral lines. However, there is sometimes a discrepancy between the results obtained by both methods. It is believed that the reason lies in the temperature fluctuations in the H-II areas or that some cold areas with very little hydrogen are responsible.

Many details of massive star formations in H-II areas are still unknown because - apart from the great distances (the closest H-II area is 1000 light years away from Earth) - the star formations are largely covered by dust. It is therefore impossible to observe the stars in visible light. Radio and infrared radiation can penetrate the dust formations, but the young stars do not emit light in these wavelengths.