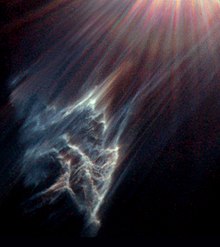 IC 349 ( Barnard's Merope Nebula ), a reflection nebula in the Pleiades

In astronomy, reflection nebulae are clouds ( nebulae ) of interstellar dust that " reflect " the light from neighboring stars , but, strictly speaking, scatter it .

In contrast to emission nebulae , the stars in reflection nebulae are not hot enough to ionize the material , so they do not cause the nebula to shine by itself. Instead, the starlight is scattered on the microscopic nebula particles, which is what makes the nebula visible. The spectrum of the reflection nebula therefore resembles that of the incoming stars. Reflection nebulae usually appear blue, as blue light is more strongly scattered than red light; a similar effect creates the blue color of the sky .

The fog particles contain many carbon compounds (including diamond dust), but also those of other elements , especially iron and nickel . The latter are often aligned with the galactic magnetic field and thereby cause a slight polarization of the scattered light ( James B. Kaler , 1998).

The distinction between reflection and emission nebulae goes back to Edwin Hubble , who in 1922 published the result of his studies of astronomical nebulae ( English bright nebulae ). The two types of nebulae are sometimes referred to as diffuse nebulae today and can often be observed together. A portion of Hubble work is the Hubble luminosity law for reflection mist (engl. Hubble luminosity law for reflection nebulae ), a relation between the apparent size of the mist and the apparent brightness establishes the associated star:

where is a constant that depends on the sensitivity of the measuring instruments .