This article covers the geometric concept. For the astronomical concept of brightness see apparent brightness .

The apparent size (also apparent diameter , visual angle , face angle , astronomical often angular extent ) of an object is the angle at which it is perceived by an observer.

and thus for the angle

In geodesy , the distance can be calculated from the apparent size by means of an object with a standardized size, for example a vertically set up staff:

Differences in the calculated dimensions g , g ′ and g ″ of an irregular object depending on the given distances r , r ′ and r ″

In astronomy , if the distance of an object is known, its approximate true extent across the line of sight is obtained

For small angles <1 °, the small-angle approximation applies , in radians : so that in angular minutes the following applies:

For a spherical object , the diameter of which is g and the distance to the center of the sphere r , the different formula applies because in the triangle the right angle is not at the center, but at the point of contact of the tangent. The difference disappears for small angles.

If you choose the Cartesian coordinate system whose origin lies in the center of the rectangle, whose y and z axes form the vertical and horizontal symmetry axes of the rectangle and where the viewer is in the half-space x> 0, these two viewing angles can be used for the Trigonometrically determine a rectangle with the vertical side length G v = 2γ v and the horizontal side length G h = 2γ h for any observer point (x, y, z):

Due to the rotational symmetry of the function graph of the vertical viewing angle ε v (x, y, z) when rotating around the y-axis (cylindrical symmetry ), its investigation can be restricted to the x, y-plane. The following terms and the function graphs shown in the figures are obtained for the visual angle functions as functions of only the plane coordinates x and y: 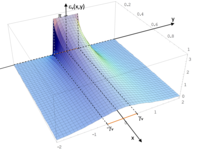 Graph of the horizontal viewing angle

Maximum viewing angle of an object for a camera

The camera location is restricted to an admissibility range Z for the complete and sharp imaging of a permanently specified object by means of a camera. This area Z is described by four inequalities in which the camera parameters are included:

If one restricts oneself to the x, y-plane with the simultaneous maximization of both viewing angles ε v and ε h , then the edge of the admissibility area Z is formed by two of the following three arcs:

Permission zone Z and no-location zone V of the camera 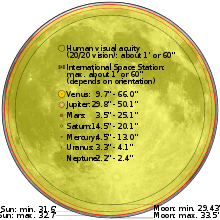 Apparent sizes of the sun, moon, planets and ISS in comparison