from Wikipedia, the free encyclopedia
Database links to Horsehead Nebula

The Horsehead Nebula is a 3  light-year part of a dark cloud in the constellation Orion , which stands out in front of the red glowing emission nebula IC 434 with a silhouette similar to a horse's head. The nebula is about 1,500 light years away from Earth and therefore appears a quarter the size of the Earth's moon . Due to its equatorial position, it can be observed from all inhabited areas on earth, but due to its low brightness it is only visible with a telescope aperture from 20 cm.

Photo of an area of ​​the Orion region by William Henry Pickering from 1888. The Horsehead Nebula can be seen to the right of the bright star ( ζ Orionis ).

The Horsehead Nebula was discovered in 1887 with the help of the then new photography . Williamina Fleming , who was entrusted with examining the photographic plates by Edward Charles Pickering, director of the Harvard College Observatory , recognized the nebula as a semicircular indentation in an emission nebula.

“… A semicircular indentation 5 ′ in diameter 30 ′ south of ζ [Orionis] . All good plate of this region show this object…. Attention was called to it in a letter of March 28, 1887, describing copies of some of these photographs sent to the Astrophotographic Congress of 1887.… "

William Henry Pickering , who carried out the astrophotographic observation, describes this region a little later together with his brother Edward Charles. They suspect that it could be a non-luminous gas that absorbs the light from stars behind.

"... the stars of the magnitudes 14 and 15 in this region are [...] distributed quite irregulary. They occur in great number throughout larger parts of the constellation; but there is a curved dark rift whose preceding edge […] is generally very sharply defined. [...] Whether the fainter stars are really absent in this region, or whether their light is absorbed by non-luminous gas, it is of course impossible to tell. "

The object was then examined with the most powerful telescopes of the time. Isaac Roberts , a pioneer of astrophotography, published a picture in 1902 with his 20-inch reflector telescope , Edward Barnard a few years later with the 40-inch Yerkes refractor and John Charles Duncan used the 100-inch Hooker telescope .

Edward Barnard published a systematic assignment of the dark cloud to other dark regions in 1919: In the Barnard catalog that was later expanded and named after him, the Horsehead Nebula has since been named Barnard 33 , abbreviated as B 33. More comprehensive catalogs of these dark nebulae followed by Beverly Lynds over 1800 entries (in which the entry LDN 1630 is equated with Barnard 33) and by CM Dutra and E. Bica, containing more than 5000 objects.

Stephen R. Waldee gives a detailed account of the history of the discovery. He also notes that the exact origin of the name has not yet been clarified. The earliest mention of it is in a letter from Frederick Hanley Seares from 1923. A publication from 1925 notes that the name Horsehead is in use. Stefan Hughes ascribes the naming during a 1921 meeting to JC Duncan, who presented his recordings, or Herbert Hall Turner .

Section of an infrared panorama that was recorded by VISTA . The Horsehead Nebula can be seen on the right above the center of the image, NGC 2023 emerges brightly below on the left . 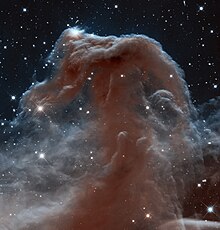 Near infrared image taken with the Hubble Space Telescope

The Horsehead Nebula is an accumulation of cold gas and dust that emit very little light in the visible spectrum and therefore appears dark. With longer exposure times or with large telescope apertures, this dark area can also be resolved, as a picture of the 3.6 m diameter Canada-France-Hawaii Telescope shows.

Images in the infrared range show the structure of the nebula more clearly. A near infrared panorama of the VISTA at the Paranal Observatory shown on the right reveals the dark cloud and its filaments, one of which forms the Horsehead Nebula, as does the high-resolution image of the Hubble space telescope in the same spectral range. In the middle and far infrared the entire cloud to which the Horsehead Nebula belongs can be seen.

Investigations in the millimeter and sub-millimeter range show that the fog consists primarily of molecular hydrogen and that it also contains a large number of different simple hydrocarbon compounds , some with oxygen and sulfur content . These molecules have a temperature of around 100 Kelvin in the outer area and 15 Kelvin in the core area of ​​the nebula; it has about 27 times the mass of the sun . The gas masses are moving, which is why the nebula will lose its resemblance to a horse's head in a few thousand years.

A survey by NASA as to which object the Hubble space telescope should photograph on the occasion of its eleventh “birthday” clearly fell on the Horsehead Nebula. For the 23rd birthday, another image was taken with the new WFC3 in the near infrared range, whereby the emission fog is filtered out and the structure of the dark cloud emerges more clearly.