The infrared astronomy is an experimental portion of Astronomy , which the radiation emitted by astronomical objects Infrared radiation uses. This radiation lies in a part of the electromagnetic spectrum that cannot be perceived by the human eye .

The infrared radiation range, also known as thermal radiation , lies between the optical (wavelength> 700 nm) and the submillimeter range (<300 μm), i.e. a frequency range between 300 GHz to 400 THz and is divided into three ranges, the

the exact limits of both the infrared range and the sub-ranges vary slightly depending on the source. In astronomy, these areas are further divided into wavelength bands in which the atmosphere is largely transparent . These bands are labeled with capital letters after the names of the optical filters that only allow radiation of the corresponding wavelengths to pass: I (around 0.8 μm), Z (around 0.9 μm), Y (around 1.0 μm), J (1.25 μm), H (1.65 μm), K (2.2 μm), L (3.45 μm), M (4.7 μm), N (10 μm) and Q (20 μm) . Outside these bands, air containing water vapor is practically opaque.

The heat radiation from the atmosphere, the telescope and the instruments themselves, which is more and more disruptive above about 2 µm, largely shapes instrument development.

Infrared radiation is very strongly absorbed by the earth's atmosphere , especially by atmospheric water vapor. Observation with earth-based telescopes is only possible below 1 μm and in a few small windows up to around 40 μm . Ground-based infrared telescopes are therefore preferably installed in high and dry locations. Examples are the Mauna Kea Observatory or the observatories of the European Southern Observatory (ESO). The ice sheets of the Antarctic are also of interest because of their altitude, coldness and drought. Large telescopes are often used for both optical and infrared observations, but there are also some telescopes specially optimized for infrared observations.

Since absorption decreases sharply with increasing altitude, infrared telescopes have been used in high-flying balloons and ballistic sounding rockets since the 1960s . High-flying aircraft ( Lear Jet Observatory , Kuiper Airborne Observatory , SOFIA ) have also been used since the 1960s . In space, not only does atmospheric absorption disappear, it is also possible to cool smaller telescopes as a whole to very low temperatures and thus suppress their disruptive thermal radiation. Since the 1980s, space telescopes for the infrared range have been used more and more, the first were IRAS and ISO , other important ones were ASTRO-F and Herschel . Spitzer and WISE are currently (Jan 2014) active, but both only at shorter wavelengths because the coolant has been used up. The James Webb Space Telescope (JWST) is expected to be launched in the foreseeable future .

The instruments of infrared astronomy are similar in concept to the cameras and spectrographs of visual astronomy . However, they have to be strongly cooled. Usually cryostats or mechanical cooling devices cooled with liquid nitrogen or helium are used for this purpose . The infrared z. Optical materials used, for example, for lenses, however, differ from those commonly used for visible light.

Often, in a process called chopping , infrared instruments regularly change the direction of observation between the examined object and a neighboring sky position. By subtracting the signals measured at both positions, the source can be better separated from the background.

Since the 1990s, it has been possible to use adaptive optics to correct air turbulence ( seeing ) for observations in the near infrared . In this way, large earth-based telescopes achieve their full diffraction-limited resolution and can compete with the Hubble Space Telescope in this regard .

Several types of detectors are used over the wide wavelength range of infrared astronomy. Normal CCD detectors , which are also used in visual astronomy, are sensitive up to a wavelength of about 1 μm . Special detectors are required for longer wavelengths.

After the Second World War, the rise of infrared astronomy began with detectors made of lead sulfide (PbS). Today, detectors based on the principle of the photodiode , made of semiconductor materials such as indium antimonide InSb and mercury cadmium telluride (Hg, Cd) Te, are used especially for the near infrared . Detectors made of doped silicon (e.g. Si: Ga) and germanium (e.g. Ge: Ga) working according to the principle of photoresistance are used at longer wavelengths. In addition, thermal detectors ( bolometers ) are used today, especially for the longest wavelengths . These show the thermal energy generated by the radiation in the detector. Up until the 1980s, infrared detectors were almost always individual detectors that had to be moved across the sky for larger images. Since then, detector arrays of up to 2048 * 2048 elements for the short wavelengths and up to a few thousand elements for the long wavelengths have become available.

The Andromeda Nebula in infrared light at 24 μm

The attenuation ( extinction ) of electromagnetic radiation by the interstellar dust varies greatly with the wavelength. At 2 µm in near infrared, it has already decreased to about 1/10 compared to visible light. This allows areas hidden behind dust to be observed, e.g. B. young stars , the galactic center and the nuclei of infrared galaxies .

According to Planck's law of radiation, cold celestial bodies such as B. Brown dwarfs or stars still deeply embedded in molecular clouds mainly in the infrared. Many atoms, ions and molecules common in the interstellar medium have important radiation transitions in the infrared. Infrared spectroscopy is particularly suitable for determining the composition and physical conditions of gas with temperatures of a few hundred Kelvin . Cold (<100 Kelvin) dust in the interstellar medium re-radiates the absorbed light in the far infrared and is often a major contribution to the energy balance of astronomical objects. In the mid-infrared there is strong emission of organic compounds in the interstellar medium that are related to polycyclic aromatic hydrocarbons .

Due to the cosmological redshift , the visible or UV light emitted by galaxies in the early universe is observed on Earth in the near infrared. This is e.g. B. crucial for the design of the James Webb Space Telescope .

Objects of observation and scientific goals

In the solar system

Planets , satellites , comets and asteroids in the solar system are intensely observed in the infrared. From IRAS z. B. discovered some new asteroids and comets as well as three bands of dust in the area of ​​the asteroid belt , which were probably caused by collisions within the asteroid belt. A new target is the properties of trans-Neptunian objects in the Kuiper Belt and the Oort Cloud .

In the Milky Way 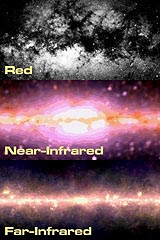 Comparison of the center of the Milky Way at different wavelengths

Many infrared observations in the Milky Way are aimed at understanding how stars are formed. Large-scale searches for young stars in all stages of development and for brown dwarfs are combined with high-resolution images and spectroscopy. Circumstellar dust disks were the first signs of the formation and development of planetary systems around other stars. In the galactic center , the vicinity of the nearest supermassive black hole is being examined in the infrared . Evolved stars and their mass ejection are another target of infrared astronomy in the Milky Way.

Infrared spectroscopy is used to study the condition and chemical composition of the interstellar medium. IRAS has also discovered diffuse infrared radiation and filamentous dust clouds that extend to high galactic latitudes.

Outside the Milky Way

In contrast to the Milky Way and most other galaxies, infrared galaxies emit up to 99% of their total luminosity in the far infrared. Interactions and collisions with other galaxies contribute to their formation. Infrared astronomy studies the contribution of high star formation rates in starbursts and active galaxy nuclei to this phenomenon.

The evolution of galaxies in the early universe is being studied more and more intensively in the infrared. In the near infrared the red-shifted light of the stars of these galaxies is observed, in the far infrared and submillimeter range the part swallowed by dust and emitted again.

After William Herschel discovered the sun's infrared radiation in 1800, Charles Piazzi Smyth was able to detect an infrared component in the spectrum of moonlight for the first time in 1856 . William Coblentz was able to detect infrared radiation from 110 stars from 1915 and is considered to be one of the founders of IR spectroscopy . These early measurements were mostly obtained with bolometers or thermocouples .

In the 1950s, the lead sulfide (PbS) detectors brought a leap in sensitivity in the near infrared. As with many later detector developments for the near and middle infrared, astronomy benefited here from the military interest in sensitive detector systems, e.g. B. for tracking aircraft and missiles. Around 1960, Harold L. Johnson and co-workers developed the first photometric system for the infrared. In 1963 infrared observations of Mars were carried out with the first balloon missions and as early as 1967 the first mapping of the entire sky in the middle infrared was carried out with a series of rocket flights, during which more than 2000 infrared sources were discovered with a total observation time of only 30 minutes. In the same year the Mauna Kea Observatory was founded, which still houses the largest infrared telescopes today. At the beginning of the 1970s, a military C-141A transport jet was converted into an infrared telescope , which from 1974 carried out observations at an altitude of 14 km as the Kuiper Airborne Observatory (KAO).

However, the breakthrough in infrared astronomy came in the 1980s with the first satellite missions. In 1983, IRAS scanned the sky. In 1989 COBE was started and discovered anisotropies of the cosmic background radiation . 1995 followed with the Infrared Space Observatory (ISO) the first real space observatory for the infrared with camera, photometer and spectrometer. In 1997 the Hubble space telescope was upgraded with the infrared instrument NICMOS, and in 2003 the Spitzer space telescope was launched. In 2009 the Planck , Herschel and WISE missions started .

The development of infrared astronomy is currently going in two main directions: