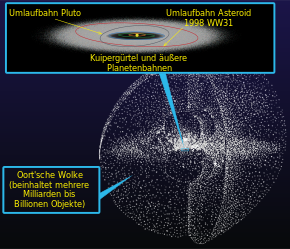 Oort cloud (not to scale)

The Oort cloud (other spelling: Oort cloud), also known as the circum-solar comet cloud or Öpik-Oort cloud , is a hypothetical and so far unproven spherical shell-shaped collection of astronomical objects in the outermost region of the solar system .

The cloud was postulated in 1950 by the Dutch astronomer Jan Hendrik Oort as the place of origin of the long-period comets . Oort took up a suggestion made by the Estonian astronomer Ernst Öpik in 1932.

Oort based his hypothesis on the study of cometary orbits and on the idea that the comets could not have come from the known regions of the solar system , as was previously assumed. Comets are destroyed in the course of several passages in the area of ​​the planets by the stronger solar wind and the formation of a comet's tail ; according to the old assumptions, they should therefore no longer occur today.

According to the theory, the “cloud” assumed by Oort encloses the remaining zones of the solar system in the shape of a spherical shell at a distance of up to 100,000 astronomical units (AU) from the sun , which corresponds to around 1.6  light years . In comparison, the most distant planet Neptune is only about 4.2 light hours (30 AU), the closest star Proxima Centauri, however, already 4.2 light years away from the sun; the heliosphere , through which the solar wind largely flows, has a radius of around 120 AU. Estimates of the number of objects in the Oort Cloud are between one hundred billion and one trillion . Presumably it merges continuously into the Kuiper Belt (30 to 50 AU), the objects of which, however , are concentrated towards the ecliptic .

According to today's view, the Oort cloud consists of rock, dust and ice bodies of different sizes that were left over from the formation of the solar system and the merging of planets. These so-called planetesimals were hurled into the outer reaches of the solar system by Jupiter and the other large planets. Due to the gravitational influence of neighboring stars, the orbits of the objects were so disturbed over time that today they are almost isotropically distributed in a shell around the sun. Due to the far greater distance to the neighboring stars, the objects of the Oort cloud are gravitationally bound to the sun despite their relatively large distance, i.e. fixed components of the solar system according to the common definition.

Due to the influence of the gravitational fields of the neighboring stars and the galactic tides , the orbits of the objects in the Oort cloud are disturbed and some of them end up in the inner solar system. There they appear as long-period comets , with a period of several thousand years. Short-period comets cannot form from comets in the Oort cloud, as the disturbance required for this by the large gas planets is too small.

The Oort cloud is not the only place of origin of comets: With an average period length , they can also come from the Kuiper belt . For example, the well-known Halley's Comet has its aphelion at about 35 AU near the orbit of Neptune.

Direct evidence of the Oort cloud through observation is not expected in the near future either, but there are many indirect indications that its existence is considered almost certain. The Oort cloud is subdivided into an inner and an outer Oort cloud, the limit for a major semiaxis of the orbit of 10,000 to 20,000 AU. The reason for this subdivision is the Jupiter Barrier , which prevents comets with a major semi-axis smaller than about 10,000 AU from entering the inner solar system. Objects in the inner Oort cloud are therefore not considered to be observable. Long-period comets with a semi-major axis smaller than about 10,000 AU, which are observed in the inner solar system, originate from the outer Oort cloud and have probably already experienced several orbits through the inner solar system, whereby their semi-major axis was gradually reduced by orbital disturbances by planets. These comets are therefore referred to as “dynamically old”, in contrast to “dynamically new” comets, which come directly from the Oort cloud and reach the inner solar system for the first time.

The discoverers of the extremely far outward orbiting asteroid Sedna - with an aphelion at around 926 AU - suggested that this object belong to the inner Oort cloud, but this has not yet been generally accepted. Many astrophysicists argue that Sedna is still too close to the sun to belong to the cloud.