(90377) Sedna is a large Trans-Neptunian object beyond the Kuiper Belt and, due to its size and mass, most likely belongs to the dwarf planets . Due to the perihelion of 76  astronomical units (AU) it cannot be an object of the Kuiper belt (KBO) scattered by Neptune and is classified by Mike Brown in the new class of "Distant detached objects" (DDOs).

These three pictures show the first discovery of Sedna. They were made on November 14, 2003 from 6:32 to 9:38 UTC. Sedna was recognized by a slight drift in these images.

Sedna was discovered on November 14, 2003 by Mike Brown (California Institute of Technology), Chad Trujillo (Gemini Observatory) and David Rabinowitz (Yale University) with the 1.2 m Schmidt telescope at Mount Palomar Observatory . Further research was carried out with the Spitzer Space Telescope and the Hubble Space Telescope . On March 15, 2004, the discovery was published. The provisional designation was 2003 VB 12 . The object received the minor planet number 90377 .

After its discovery, Sedna could be identified on older images dating back to 1990, which made it possible to calculate more precise orbit data. Since then, the planetoid has been observed through various telescopes such as the Hubble, Spitzer, and Herschel Space Telescopes, as well as Earth-based telescopes. In December 2017, there were a total of 196 observations over a period of 25 years.

Because of its cold and distant nature, the explorers named the object after Sedna , the Inuit sea ​​goddess who , according to legend, lives in the cold depths of the Atlantic Ocean . On September 28, 2004, the Minor Planet Center announced the name.

Like all other Trans-Neptunian objects except Pluto , Sedna has no official or commonly used astronomical symbol . Sedna symbols circulating on the Internet (e.g.

) are drafts by private individuals. An official symbol assignment is not to be expected, since astronomical symbols only play a subordinate role in modern astronomy.

Comparison of Sedna with Pluto; the green area of ​​the orbit shows the section that lies south of the ecliptic.

Sedna's current position relative to the Kuiper Belt and the planets 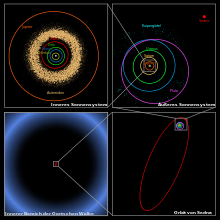 These graphs show Sedna's current position compared to other objects in the solar system.

Sedna orbits the sun on a prograde , highly elliptical orbit between 76.15 astronomical units (AU) and about 900 AU from its center. The orbit eccentricity is 0.841, the orbit is 11.9 ° inclined to the ecliptic .

The current distance to the sun is 85.2 AU (just under 12.75 billion kilometers). This is roughly three times the distance between Neptune (the outermost planet) and the sun. Sunlight takes 11 hours and 49 minutes for this route. Sedna will reach her perihelion in September 2076.

In aphelion , Sedna is about 18¼ times farther from the Sun than Pluto is at its outermost point. This corresponds to 0.0142 light years . So it takes the sunlight about 5 days and 5 hours to reach Sedna when she is aphelion, while it is about 10½ hours at the point closest to the sun. One would have to cover Sedna's apheld distance over 300 times to get to the next star system, Alpha Centauri .

The distance from the aphero is extraordinarily large, but Sedna is surpassed in this respect by the considerably smaller object (308933) 2006 SQ 372 crossing the neptune orbit .

Due to the extreme orbital elements, the object no longer belongs to the Kuiper belt; on the other hand, it is only a tenth as far from the sun as the assumed Oort cloud. Even if the exact classification is still unclear, Sedna belongs to a new class of objects (see below ).

According to current estimates (as of 2012) Sedna has a diameter of 995 km. Previously, much larger diameters of 1400 to 1700 km were assumed. However, since Sedna apparently has a greater reflectivity than originally assumed, this value has been corrected significantly downwards. This makes Sedna slightly larger than the largest body in the main belt , the dwarf planet Ceres .

Sedna rotates around its axis once every 10 hours. 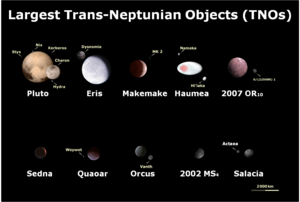 Sedna has a strong reddish color, which is similar to that of the centaur Pholus , which is much closer to the sun, or the planet Mars . The cause of this coloration has not yet been clarified; it differs significantly from the mostly charcoal color of the previously discovered Transneptune .

Because of this great distance to the sun, the surface temperature is likely to be only 30 K (−243 ° C). The apparent magnitude of Sedna in the perihelion is 20.4 m .

Sedna was often referred to in the media as the 10th planet in our solar system - a statement that, however, received little support from science. Astronomers did not see Sedna as a “real” planet because of its relatively small size and high orbital eccentricity .

Before there was an official and generally accepted definition of a planet, the question of when an object was to be called a planet was not clearly clarified. If one were only to start from the size of the object, then the object Eris , announced on July 29, 2005 , whose diameter is estimated at 2326 km, should in any case have been the 10th planet, provided that Pluto had retained its status. If a stable orbit is used as a yardstick, Pluto and all other objects differ considerably from the other planets due to their strongly eccentric orbit.

The official definition uses a third condition that requires that an object must have cleared its orbit of other objects by its gravitational pull in order to be considered a planet. This does not apply to any of the objects discovered since 1846, as a result of which their planetary status was denied or denied. Instead, objects that do not meet this condition are now defined as the new class of dwarf planets .

It was a matter of principle whether the solar system had 8 or 10 (and possibly more) planets. On August 16, 2006, a commission of the International Astronomical Union published a definition for a planet in advance, according to which Sedna was classified as a "planetary candidate". However, the vote on August 24th revealed that Sedna could only be classified as a dwarf planet. Until it is officially determined by the IAU, Sedna is considered a dwarf planet candidate .

Both Mike Brown and Gonzalo Tancredi come to the conclusion that Sedna is almost certainly a dwarf planet, as it is presumably in hydrostatic equilibrium due to its estimated size and mass, i.e. it is likely to be almost spherical in shape. Gonzalo Tancredi proposes that the IAU officially recognize them as such.

As the most distant known large object in the solar system, and on an unexpected orbit, Sedna is speculative - much more so than other minor planets . The great distance to the sun, for example, raises questions about alternatives to previous models of origin. The current model for planet formation (agglomeration of planetesimals ) already provides a period of formation for regular objects of the Kuiper Belt due to the low density of the protoplanetary material that is more than a power of ten longer (several 100 million years) than the lifespan of the protoplanetary disk (less than 10 million years). Various hypotheses exist to explain these and other previously incomprehensible facts, but further research is needed to assess them.

Discussion on origin and provenance

The three explorers express the assumption that Sedna belongs to an "Inner Oort Cloud" . This could have formed from the original Oort cloud due to an external disturbance . For example, an earlier, close encounter of the solar system with a nearby star comes into question . The unusually eccentric orbit could also result from disturbances by a larger body of our solar system further out ( planet nine ). Then Sedna would be an outwardly scattered object of the Kuiper belt .

First it was observed that the sunlight reflected by Sedna changes periodically every 40 days, from which it was concluded that the period of rotation was the same . For a minor planet, this would be an extraordinarily slow rotation, which raises the question of braking effects. One possible explanation would be tidal forces from one or more large moons. The examples of Venus and Mercury show that a slow rotation can occur without a moon. Mercury, however, was slowed down by the tidal forces of the sun to a 3: 2 resonance with its orbital period.

On April 14, 2004, NASA published new images from the Hubble Space Telescope, which, according to the investigation, do not reveal any companion. A moon of the required size should have been recognized unless it was immediately in front of or behind Sedna when it was taken. In addition, Sedna's rotation period could not be derived exactly from the observations with Hubble.

From October 2004 to January 2005, a group at the Harvard-Smithsonian Center for Astrophysics led by Scott Gaudi carried out an observation campaign that took the results of Brown et al. could not confirm. This group determined periods of rotation of 10 and 18 hours, which do not need a braking effect of a moon to explain. With these measurements, rotation periods of more than 10 days can be excluded. According to a conjecture by Gaudi, the originally measured period of 40 days could have been simulated by background galaxies - but further observations are required in order to be able to determine the exact period of rotation.