As Transpluto one was between 1930 and about 1985 hypothetical tenth planet of the solar system called the one outside the orbit of Pluto suspected and for decades sought. The name was based on the working name Transneptune , created around 1890 , which was initially superfluous with the discovery of Pluto in 1930 and is now the name of a whole group of asteroids and dwarf planets far from the sun . Until the previous ninth planet Pluto was downgraded to a dwarf planet on August 24, 2006, the search for a further tenth planet also referred to planet X , where the "X" stood for the Roman numeral 10 in addition to the symbol for the unknown .

After the planet Neptune was successfully predicted by a precise orbit analysis of Uranus , Percival Lowell postulated a ninth planet beyond Neptune, the so-called Trans- Neptune, to explain orbital deviations of Uranus and Neptune. He founded the Lowell Observatory in 1894 and systematically searched for this planet until 1915. Clyde Tombaugh , who was later commissioned to do so, found Pluto by chance in 1930 while intensively searching a narrowly defined section of the sky. Despite its small size (it was significantly overestimated until around 1950, and corrected downwards again in 1978 after the discovery of the moon Charon ), Pluto was considered the ninth planet for 76 years.

It soon turned out that Pluto is too small to noticeably disturb the orbit of Neptune and to explain its orbit deviations. So soon after 1930 the search for the even more distant Transpluto began at the Lowell Observatory instead of the Transneptune . From 1957 Henry Lee Giclas carried out a systematic photographic survey of the sky that took 18 years to complete. For a long time , the orbit disturbances of Neptune on which the search was based were incomprehensible - they were believed to be the effects of small, inevitable measurement errors . Only with more recent findings in astrophysics was Neptune's behavior finally understandable.

The terminology of objects far from the Sun proved to be in need of expansion between 1980 and 1992, when further trans-Neptunian objects such as the Plutinos were discovered at the position of the Kuiper belt, which had been postulated for a long time. 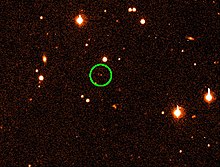 In March 2004, the topic of the “tenth planet” became topical for the media again when the approximately 1000 km large Sedna was discovered at twice the distance from Pluto, but was not classified as a planet by experts. Finally, on July 29, 2005, the discovery of Eris (initially as 2003 UB 313 ) was announced. This approximately 2,300 km large body was classified as the "tenth planet" by both NASA and the press at the time of discovery. Eris fulfilled the status of a "Transpluto" in terms of orbit and size and thus triggered the "planetary discussion" of the International Astronomical Union (IAU). According to the definition of “ planet ” adopted in 2006, neither Pluto nor Eris are planets, but rather belong to the newly created category “ dwarf planet ”.

If there were to be another planet in addition to the eight (according to the 2006 definition), it would by definition have to "have cleared the area around its orbit". In the meantime, several other larger bodies have been discovered in the outer areas of the solar system. Most of them can be assigned to the asteroids or comets . Eris and Pluto are still the only ones with a diameter of over 2000 km. Therefore, according to the new definition of planets, the existence of another “real” planet is now considered unlikely.

Nevertheless, there is always speculation about the existence of such a planet. One reason for this is the seemingly unlimited supply of comets from the zones of the Kuiper Belt and the Oort Cloud . A planet circling further out could use its gravity to ensure that matter from the Oort cloud reaches the inner solar system.

As far as we know today, there may well be another planet. However, this should not cause any noticeable orbital disturbances on the known planets and space probes in the outer solar system and have escaped all previous sky surveys for moving objects. The results of the WISE space telescope in particular severely limit the size of this planet and shift its hypothetical orbit to several hundred to thousand AU. Its orbit would also have to be very elliptical or far outside the ecliptic .

A brown dwarf or a weak star (" nemesis ") that would make the sun a member of a binary star system cannot be definitively refuted until today (as of January 2016), but it is almost unlikely because it is due to its own radiation through the previous sky surveys would very likely have been found.

Tyche (thesis by John B. Murray)

In 1999, John B. Murray from the Open University in Great Britain and John Matese from the University of Louisiana at Lafayette independently calculated the orbits of long-period comets. In doing so, they came to the conclusion that a possible previously unknown celestial body would cause regular orbital disturbances in the bodies of the Oort cloud and that they would be guided on cometary orbits into the inner solar system . Murray postulated as the cause of a large "Planet X" ( Tyche ) with a mass of 1-10 Jupiter masses at a distance of 30,000 to 50,000 AU from the sun (approximately 1 / 10 bis 1 / 6 of the distance to the nearest star). Measured against the age of the solar system, the orbit of such a body is unlikely to be stable, since an orbit around the sun would take millions of years. According to previous models not a planet, but it can be in the formation of the solar system at this distance have formed, which is why Murray suggested that he either a once from the interstellar space in our planetary system penetrated Planemo is or by migration wandered outside.

So far, Murray's thesis can neither be confirmed nor excluded. However, the infrared space telescope WISE could not detect a planet the size of Jupiter within 26,000 AU of the Sun.

The first hypothesis about a possible planet at the very edge of the solar system comes from Daniel Whitmire . In 1985 he called it "Planet X". Results from the comparison of the orbital data of the dwarf planet Sedna and the asteroid 2012 VP 113 discovered at the end of 2012 can be explained according to a study published by some researchers in early 2014 with the fact that there is an undiscovered planet with at least ten times the earth's mass outside the Kuiper Belt at a distance of Could give "a few hundred AU". However, other explanations of such orbit data are also discussed. A work published shortly thereafter (March 2014) denies the existence of a planet with twice the earth's mass within about 500 AU of the sun's distance, and for a planet with 15 times the earth's mass within the range of the measurement accuracy that can be achieved today , based on the measurement of orbital disturbances of known objects in the solar system of about 1000 AU. In 2016, the US astronomers Batygin and Brown ( California Institute of Technology ) postulated the existence of a planet with at least about 10 times the mass of the earth and an orbital period of up to 20,000 years using mathematical calculations.