Tombaugh was born to a family of farmers. His hopes of attending Streator College were dashed when a hailstorm devastated his parents' property. The family moved to Kansas in 1922 and started a new life near the town of Burdett. Young Clyde studied on his own, teaching himself geometry and trigonometry . At the age of 20, he built his first telescope . He watched the Mars and Jupiter , and sent drawings of his observations at the Lowell Observatory in Flagstaff ( Arizona ). He was really only asking for help and suggestions, but Vesto M. Slipher , the director of Lowell, offered him a position as research assistant ( junior astronomer ) in 1929 . Tombaugh accepted and stayed there for 14 years. 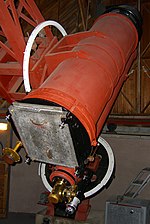 Tombaugh made his photographic plates with this astrograph .

Here he was commissioned to carry out a systematic search for a trans-Neptunian planet (also called Planet X), which had been predicted by Percival Lowell on the basis of the calculations of the mathematician Elizabeth Williams and William Pickering . On February 18, 1930, he made the discovery of his life by recognizing a moving object as the long-sought trans-Neptunian object . It was the third systematic search operation, financed by Percival Lowell in 1916. The unknown celestial body was later named after the Roman god of the underworld Pluto , who was able to make himself invisible (Lowell's initials PL are also said to have been decisive). In the years that followed, Tombaugh discovered hundreds of new asteroids and two new comets . 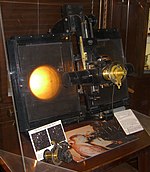 Using this blink comparator from the Lowell Observatory , Tombaugh compared the photographic plates when he discovered Pluto.

Tombaugh graduated from Burdett High School in 1925 and was finally able to take up astronomy at the University of Kansas on a scholarship in 1932 . In 1936 he obtained a bachelor's degree and in 1938 a master's degree . From 1943 he was a lecturer in physics at Arizona State Teachers College, now Northern Arizona University , and was later instructor for navigation tasks. In 1945 he worked as a visiting professor of astronomy at the University of California, Los Angeles .

For lack of money, he was unable to resume his old position at the Lowell Observatory after the Second World War . Instead, he developed optical orbit tracking telescopes for the A4 rockets that were tested there at the White Sands Proving Grounds from 1946. In 1955 he moved to the New Mexico State University in Las Cruces , where he established the Astronomy Department and until his retirement in 1955 1973 taught astronomy. During this time he met a young man in the neighborhood: Jaron Lanier . Lanier learned to grind lenses from Tombaugh, which later benefited him when developing the first VR glasses.

On January 19, 2006, the New Horizons space probe launched to explore the dwarf planet Pluto. Also on board are ashes from Clyde Tombaugh.

Tombaugh was married to Patricia (Patsy) Edson (1912–2012) from 1934. The marriage resulted in two children; the asteroid of the inner main belt (2941) Alden is named after his son Alden . Since 1974 he has given its name to the Tombaugh cliffs on Alexander I Island in Antarctica.