Under visual astronomy or astronomy in the visual is understood as the portion of the optical astronomy , which deals with the observation of celestial objects in the electromagnetic spectrum of visible light is concerned. Originally, before the invention of the telescope, these were observations with the naked eye , which can perceive wavelengths from 380 (violet) to approx. 750 nm (red). Since the invention of the CCD sensors (CCD) the extended wavelength range from approx. 350 to 1000 nm can be recorded with the same instruments that were traditionally used in visual astronomy , this wavelength range is sometimes also called "visual". 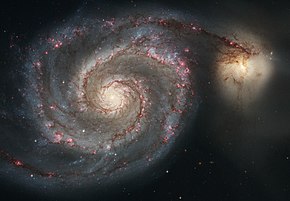 The galaxy M51 in visual light

Visual astronomy begins with an open-eyed view of the sky . Astronomy was practiced in this way for over 5000 years before the invention of the telescope . The star-strewn night sky of the Near East was used as orientation by combining characteristic groups of stars into constellations . Old stories and traditions played their part, and so gradually numerous figures from Greek mythology achieved a permanent home in the starry sky. The astronomical observations from the pre-telescopic period initially included the celestial rotation and time determination , the solar path , lunar cycles and conspicuous planetary constellations, as well as solar and lunar eclipses . In the second millennium BC In addition to this, simple models of the planetary orbits and a more precise calendar calculation were added, and the fact that the starry sky is not unchangeable was shown by the appearance of comets , shooting stars and the registration of meteor streams . A few centuries before the new era, systems of celestial coordinates were established, the first star catalogs were measured and the precession of the earth's axis was determined.

The further development of the telescope by Galileo Galilei and Kepler brought enormous progress in the observation and exploration of the night sky. It finally became apparent that the faintly shimmering Milky Way , for example, consists of innumerable stars . The four largest moons of the planet Jupiter were also discovered and the subject of continuous observation, which made the heliocentric view of the world plausible. Around 1680 telescopes were first equipped with thread nets, which increased the measurement accuracy in the sky (and when measuring the earth ) from 0.02 ° to a few angular seconds . The observation of star clusters and double stars was the beginning of scientific cosmology , which also fertilized philosophy (see Kant). The celestial mechanics established around 1800 , together with precise measurement of the orbits of known planets, led to the discovery of the planet Neptune and many asteroids . In the middle of the 19th century, the photo plate began to replace the human eye as a detector, making observations more objective and reproducible. Still, the most accurate surveys of the sky until around 1950 were based on visual position measurements. In the course of the 20th century numerous special photographic emulsions for astronomy were developed, but astrophotography itself was replaced by the CCD sensor around 1990 . After decades of dominant astrophysics, this led to a renaissance of astrometry , which also contributed to a more precise understanding of galactic dynamics and extragalactic processes. The greatest boom in astronomy was triggered by space travel from 1958 , especially in planetology and the observation of radio waves through to infrared and X-ray astronomy .

Optical telescopes for astronomical purposes are now almost exclusively mirror telescopes . For decades, the 5-meter mirror on Mount Palomar was the largest of its kind until the composite mirror technique was developed around 1990. The currently largest telescope has a main mirror with a diameter of 10.4 m ( Gran Telescopio Canarias ), which only replaced the two 10 m telescopes of the Keck Observatory in Hawaii when it was completed in August 2008 . Instruments of this size, however, do not have a large mirror, but consist of i. d. R. hexagonal mirror segments together. The largest one-piece mirrors are the four 8.2 m diameter of the European Southern Observatory (ESO), which together form the Very Large Telescope (VLT). The Hubble Space Telescope is an example of a large optical telescope in orbit . Since the technical details of the optics in the visual and infrared range do not differ significantly, both visual and instruments for infrared astronomy are mounted on all these telescopes .

In the scientific field, the eye is rarely used for observation. Newer astronomical research telescopes can no longer be used with an eyepiece . Instead, cameras, sensors and instruments are connected to the telescope, which perform various measuring tasks. These are mainly the acquisition of analog or digital images and spectroscopy . More specific methods are polarimetry and interferometry . Specialized photometric instruments are of decreasing importance , since brightness can now be measured directly on CCD images.

The instruments always take pictures in black and white. Because precisely defined color filters can be inserted into the beam path of the instruments, it is possible to combine individual images into color images. This is done almost exclusively for public relations purposes . Since the astronomical filters only roughly correspond to the color perception of the eye, the results are often only approximately color-fast or completely in false colors .

CCD sensors are used as detectors in most instruments , with the exception of astronomical photometers , which instead work with photo multipliers . The latter cannot take pictures, but are more efficient than CCDs.

In addition to a clear sky, other factors are essential for good observations in the area of ​​visible light:

In addition to stable high-pressure weather, there is also short-term reverse weather , in which the air is usually particularly transparent. Because of aspects 1, 2 and 3, observatories have mainly been built on mountains since the 19th century, which should have a suitable terrain shape because of (4). It is best to avoid the inevitable limitations of space telescopes in terrestrial locations .

The amateur astronomy is limited in most cases to the classic visual spectral range, either by astrophotography or with the naked eye, but increasingly found here CCDs use. Amateur astronomers do not limit themselves to images, spectroscopy is also successfully practiced by amateurs.

There are a variety of optical devices that allow visual observation of the night sky. Prism binoculars and telescopes or reflector telescopes are particularly well suited for visual observation . Depending on the objective of the observation, a low- magnification device with a large field of view or a high-magnification device with a correspondingly smaller field of view is the means of choice: Extensive objects such as the Milky Way , certain star clusters , large gas nebulae or even comets can already be seen within their surroundings see in small binoculars , for most planets refractors with high magnification are suitable, while for most deep-sky objects a large opening is particularly important, a reflector telescope with an opening of 200 mm, for example, can collect significantly more light than binoculars with 50 mm opening.

The opening of the telescope divided by the focal length, the focal ratio , determines the image scale in the primary focus. In a telescope with a low image scale, the collected light is distributed over a smaller area and extended objects appear brighter. While reflecting telescopes usually have larger ("faster") focal ratios and are well suited for deep-sky observations, lens telescopes are very suitable for planets because of their higher contrast. The actual magnification then comes about through the eyepiece, with which the image in the primary focus is viewed like a magnifying glass.

In addition to telescopes, binoculars can also be used to observe. The observation with binoculars can be both simple and operated with relatively great technical effort. The effort increases with the size of the instrument used. When using larger binoculars, their fixation plays an important role, since with increasing size and magnification, meaningful, hands-free observation is no longer possible. All types of setups and tripods have been designed for this application . A handy pair of binoculars, on the other hand, offers an opportunity to observe the Milky Way or other objects. In contrast to a telescope, the large field of view is advantageous when observing with binoculars. Worthwhile objects for observation with binoculars are the Messier objects , planets and their moons, the earth's moon , comets , as well as the sun and sunspots , which can only be observed through a filter.

Astronomical observation with the eye

For the success and the informative value of an observation it is important which details can be seen on the telescope and which cannot. The objectively visible details depend on several factors:

The individual factors that make an observation more or less successful include not only visual acuity but also the experience of the observer (especially with weak objects or contrast) and the dark adaptation of the eye.

First the pupils of the eyes open to allow a larger amount of light into the eye. This phase is partially completed after a few minutes and fully completed after about half an hour. But every incidence of light disturbs this adaptation, whereby blue light components completely prevent it. The weak, red light of a diode or suitable flashlight bothers them least.

The second part of dark adaptation is a biochemical process: Hormone-controlled rhodopsin is stored in the rod cells of the retina in order to further increase their already high sensitivity to light. This process begins after about three quarters of an hour in the dark and ends after about two hours. This means that the eye can only fully adapt to darkness after about two hours.

Faint celestial objects such as distant nebulae or low-brightness stars are best observed with indirect vision : You don't fixate on the object, but just look past it. As a result, the so-called limit brightness (limit size) can be increased by up to 1 mag , i.e. H. increase physically to more than double. 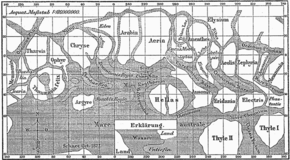 Map of the surface of Mars according to Schiaparelli

The drawing , in contrast to the photographic or electronic image, allows the observer to capture exactly what he has seen with his own eyes. The observer can thus document changes in the observation conditions and follow progress in his own experience and observation technique. For the latter in particular, keeping an observation book is recommended , with a weak red light preventing the dark adaptation from being disturbed.

Drawing directly on the telescope eyepiece assumes accuracy in observation, but since the general advent of photography has no longer been able to claim scientific accuracy, although very detailed drawings exist from the 18th to the early 20th century. Earlier drawings often suffered from the poor quality of the telescopes. Particularly noteworthy are the Mercury and Mars drawings by Giovanni Schiaparelli , those of Jupiter by Kasimir Graff , the detailed lunar atlases by Philipp Fauth or Antonín Rükl and the nebula drawings by Angelo Secchi .