This branch of astronomy is still relatively young, as it is not possible on earth to collect gamma rays from space , as these are absorbed by the earth's atmosphere . Scientists who want to study gamma ray sources in space therefore have to rely on appropriate observatories that orbit the earth on satellites . However, it is also not possible outside the earth's atmosphere to observe gamma ray sources like in visible light by means of a lens or mirror telescope , since these high-energy rays are not refracted by lenses and are not reflected by mirrors. Scintillation counters that are sandwiched one on top of the other are used, in which flashes of light are generated when a gamma photon passes through a certain material: The flashes of light are measured by semiconductor photomultipliers , and their track through the detector stack enables a rough estimate of the direction of the incident gamma photon to within a few degrees .

Gamma astronomy on the ground

With Cherenkov imaging telescopes, it has been possible since the beginning of the 2000s to observe gamma rays indirectly from the earth by observing the interaction of cosmic gamma rays with the earth's atmosphere . When the gamma photons collide with the molecules of the high atmosphere, secondary particle showers arise , which in turn emit Cherenkov light when they fly through the atmosphere . The resulting conical flash of light in the direction of flight of the particles (i.e. towards the ground) can be measured with Cherenkov telescopes.

Even if it was already suspected in the 1940s and 1950s that there might be gamma rays in space, it was only the Explorer 11 satellite (launched on April 27, 1961), which was built for this purpose, that was able to detect gamma rays. During his 4 month long mission he discovered 22 gamma ray events.

This was the first of a series of satellites that from now on regularly observe gamma rays in orbit :

Gamma telescopes on the ground 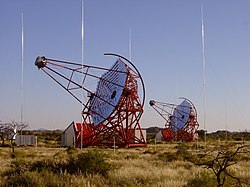 In the case of the earth-based observation of gamma rays, after a series of smaller test projects, two groundbreaking projects that are currently in operation should be mentioned:

Due to the already mentioned high energy of gamma radiation (over 10 5  eV compared to light with ~ 1.5… 3 eV) the mechanisms of formation of this radiation must be completely different from those of light. The majority of these are dramatic explosions and collisions in space:

The highest photon energy of 16 TeV observed so far  , observed with the HEGRA telescope, had its source in the Blazar Markarjan 501 .