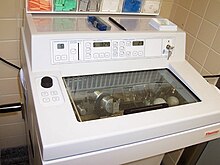 A cryostat ( Greek κρύος , cold) is a cooling device that can be used to reach very low temperatures and keep them constant. Cryostats and the like are used. a. in low temperature physics , superconducting technology and for cooling infrared detectors. 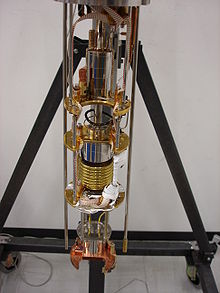 Mixture cryostats generate low temperatures in the millikelvin range. The thermodynamic phase transition between a 3 He-rich and 3 He-poor phase is used in the 3 He- 4 He mixed cooling .

In the refrigerator cryostat , cooling is carried out by a small cooler ( cryocooler ) and therefore without cryogenic liquid.

In order to be able to cool the cryostat with as little energy as possible, very good thermal insulation is necessary. The heat input by convection is reduced by installing the cold components in an evacuated container. The cold components are fastened to the warm outer container to reduce heat conduction in as few places as possible with suspensions and supports with low thermal conductivity . The heat radiation is reduced by either actively cooled or passive heat radiation shields built into the evacuated space. The passive heat radiation shields used are often metal-coated plastic films layered 10 to 30 times on top of each other, the so-called super insulation . In addition, the entire cooling system of the cryostat must be 100 percent gas-tight , otherwise the entire process will collapse.

Helium cryostat for the infrared detectors of the Spitzer space telescope 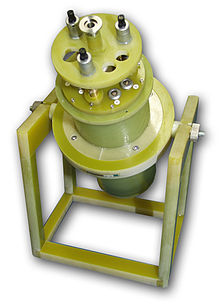 Cryostats are used to investigate or use low-temperature phenomena: e.g. B. to