The terrorist attacks on the World Trade Center and the Pentagon in the USA on September 11, 2001 , in which around 3,000 people were killed, are considered to be one of the most formative events . The attacks have often been described as a historic turning point and throughout the decade led to ongoing debates about changes in domestic and foreign policy, both in the USA and in Europe . They led the war in Afghanistan into a new phase and founded the Iraq war declared two years later , as a result of which the then dictator Saddam Hussein was overthrown. Based on the event, tensions between the Muslim and Western world increased over the following years.

The rapid rise of China to an industrial nation led to a raw material boom and a new structure of the global economic order. The G20 became an increasingly important international, but informal, association.

As a consequence of global money speculation , a real estate bubble burst in the USA and other European countries at the end of 2007 , which resulted in a global banking crisis that led to the collapse of the major American bank Lehman Brothers . In order to stabilize the banking system, it was decided in several countries to provide the financial institutions with loans through state intervention . As a result of these far-reaching bailouts, the national debt of many countries rose , which led to the euro crisis .

The use of digital media reached a new quality in this decade. The Internet caught on across the board and began to play an increasingly important role in both professional and private everyday life, and use via mobile communications increased. In addition, social networks such as Facebook , Myspace and Twitter became very popular, especially with young people. Blogs increasingly began to establish themselves as online journalism and opinion media. YouTube became the most popular video platform in the world and thus increasingly exerted influence on the cultural and political development of world events. The online encyclopedia Wikipedia was founded on January 15, 2001.

The views, as the decade colloquially can be described, are different. None of the proposals met with unanimous support. The most frequently encountered terms are the 2000s (years) and the noughties , the latter often only since 2009 in the course of the emerging decade reviews. Here is noughties (or DNF ) used more oral and colloquial, while written language, the spelling has prevailed with the year ( 2000s ). 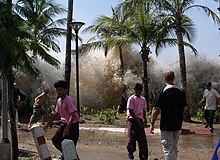 Beginning of the worst global economic crisis since 1930 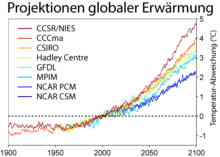 Some projections of the temperature development up to 2100

The High Definition Television is introduced

Glasses for viewing a 3D movie 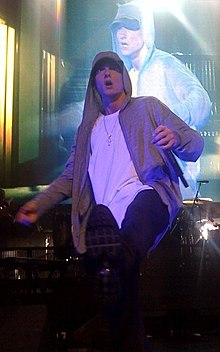 The most successful artist of the decade: Eminem

The burning skull as a symbol of the Wacken Open Air