Napster was a music exchange company founded by Shawn Fanning , John Fanning, and Sean Parker that went online in 1999. Its purpose was to make it easier to distribute MP3 music files over the Internet . 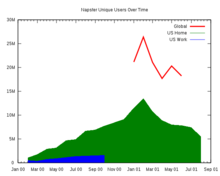 Its peer-to-peer (P2P) approach was revolutionary . The Napster software searched the computer on which it was installed for MP3 files and reported the results to a central server on the Internet, where the offers and search queries from the other participants were also received. As a result of a request, the server reported back the IP addresses of the computers that offered the music file sought. The two clients could then connect directly to each other (peer-to-peer) and copy the piece of music. A multiple loading from several sources, as it was later introduced at other music exchanges, was not possible with the official client.

Napster and the community

Napster was at times the fastest growing community on the Internet. This is explained by the fact that the system is free of charge and the attractive content. Shortly before her death in February 2001, the Napster community comprised around 80 million users worldwide, 1.6 million of which were constantly online; In January 2001 alone, the exchange volume was around two billion files.

The server-client system, which relied on central computers to relay search queries, turned out to be fatal for Napster. As a result, the rights exploiters in the music industry and the RIAA ( Recording Industry Association of America ) were able to complain about Napster and demand that the server be shut down. Eventually Napster was forced to install filter software, but it never worked properly because the users were able to use the filters ingeniously with file renaming (Metallica to EtallicaM or acillatem etc.). Previously, Bertelsmann had bought into Napster in a sensational coup at the time, initially in the form of a loan with the option of converting this into a share later. In the end, Napster was switched off in its original form.

During the quarrels between Napster and the music industry, several alternative P2P programs emerged, for example various programs based on the Gnutella network (e.g. LimeWire ). What was new about them was that they no longer needed a central computer to relay search queries. The once popular FastTrack network (e.g. Kazaa ), which was similar in structure and appearance to Napster , was confronted with similar legal problems as Napster at the time, which was accompanied by a rapid decline in users. The EDonkey2000 network (e.g. eMule ) is still popular -

In February 2003, several American composers and record companies filed a lawsuit against Bertelsmann Verlag. The accusation was that by buying and supporting Napster, it enabled the distribution of pirated copies and caused great economic damage.

Thanks to several alternative server implementations, the original Napster protocol was later used for other purposes. The (historically) most important server was OpenNap . The publication of the protocol made it possible for several (mostly open source ) clients to be implemented. The implementation most frequently used later, however, was SlavaNap .

Napster in the movie

In The Italian Job , the character Lyle claims to be the inventor of Napster. His former roommate Shawn Fanning is said to have stolen the disk with the software. Shawn Fanning himself was available for a cameo to film a flashback . Napster is also mentioned in the film The Social Network (2010), Justin Timberlake plays the Napster founder Sean Parker.