The Strokes (Engl. [ Strəʊks ]) are an American rock band from New York City . The band is considered a representative of garage rock . Over time, they have developed their style through New Wave influences.

The band members of "The Strokes" come mainly from wealthy backgrounds and deal with classic rock 'n' roll themes in terms of content and style .

With the exception of Albert Hammond Jr. and Fabrizio Moretti , all members were born in New York City. Guitarist Nick Valensi met front man Julian Casablancas , son of the former head of the Elite modeling agency, John Casablancas, during his time at the prestigious New York Dwight School. During their school days, they both became friends with the drummer Fabrizio Moretti. Not only Julian Casablancas is the son of prominent parents, guitarist Albert Hammond Jr. also has a prominent father as his father, Albert Hammond ; this had a worldwide hit with "It Never Rains in Southern California" in the 1970s.

The Strokes' musical life began in 2001 with the EP The Modern Age . During the subsequent tour of the British clubs, they were treated to a hysteria that was previously only known in England from British newcomer bands.

In 2001 they released their debut album, Is This It , on Rough Trade Records . The album became an unexpectedly huge hit, both commercially and critically. In 2003 the music press (and the meanwhile numerous fans) were excited about the second album Room on Fire . As is so often the case with bands whose debut was a great success, the critics' opinion was very clearly divided and the first voices about the soft style and commercialization of the strokes were loud.

The third studio album, entitled First Impressions of Earth , was released in Germany on December 30, 2005, was very successful commercially and received mostly positive reviews. Initially, the Strokes were known for extremely short concerts, which usually only consisted of eight to ten songs. However, this changed until the tour in 2005. In the following year 2006, The Strokes even made it as headliner on the main stage ( green stage ) of the well-known sister festivals Hurricane / Southside , which are among the largest and most important music festivals in Germany. 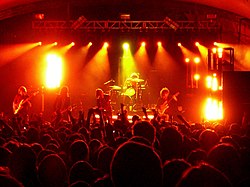 Singer Julian Casablancas has been married to Juliet Joslin (management employee of the band) since February 2005. In January 2010 the two had a son. Drummer Fabrizio Moretti was in a relationship with actress Drew Barrymore until the end of 2006 . Guitarist Nick Valensi and his wife Amanda de Cadenet have had twins since October 19, 2006.

Guitarist Albert Hammond Jr. released a solo album in 2006 called Yours to Keep , some of which were written for the Strokes but were rejected by the rest of the band. He recorded his second studio album ¿Como Te Llama? In October 2007 . which was released in June 2008.

As a result, both frontman Julian Casablancas and bassist Nikolai Fraiture released their own solo album under the stage name Nickel Eye in 2009 . Fraitures The Time of the Assassins was released on Rykodisk in January and Casablanca's Phrazes for the Young on RCA Records in October. Drummer Fabrizio Moretti also plays in the band Little Joy together with Rodrigo Amarante, singer and guitarist of Los Hermanos , and Binki Shapiro. Their debut album Little Joy was released in 2008.

The fourth studio album, Angles , was released on March 18, 2011 in Germany. The first single was called Under Cover of Darkness . The song was made available on February 9, 2011 as a free download on the band's homepage.

The Strokes' fifth studio album, Comedown Machine , was released on March 22, 2013 . On January 25th, the song One Way Trigger was made available for free download on the band's homepage. On February 13, 2013, the single was heard for the first time on the radio. The second single All The Time was released on February 19th as a download. The song is described as a musical return to the classic strokes sound of the first two albums Is This It and Room on Fire . On March 18, 2013, Comedown Machine was fully broadcast as a free stream on pitchfork.com.

Commons : The Strokes  - Collection of images, videos and audio files

Studio albums: Is This It  | Room on Fire  | First Impressions of Earth  | Angles  | Comedown machine