Opossums ( Didelphis ) are a genus of opossum rats with six species. In a more general sense, all opossums, and not just members of this genus, are called possums. The name opossum comes from a North American Algonquin language and is not to be confused with the term possum , which is used in English for a range of Australian marsupials. 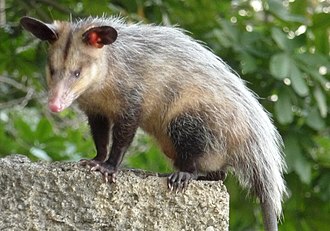 Opossums are the largest opossums. They reach a body length of 32 to 50 centimeters (comparable to the house cat), in addition there is an equally long, bare tail. They can weigh up to 5.5 kilograms. Their fur is whitish to gray in color and they usually have three black stripes on their heads, one above each eye and one in the middle. All four feet have five clawed toes except for the first toe of the hind feet, which is developed like a thumb and can be placed opposite the other toes.

Usually opossums live in wooded or bushy areas. However, they are cultural followers and also occur in plantations, parks and cities. Their range has grown since the arrival of Europeans in North America.

Opossums are nocturnal loners. They usually encounter other conspecifics aggressively. They can swim well and, with the help of their grasping tail, also climb well. Nevertheless, they mostly live on the ground. They spend the day in crevices, hollow trees, in structures they have dug themselves or in nests that they lay out with grass and leaves. Opossums are not permanently territorial. They only inhabit a certain area for a few months, but during that time they stubbornly defend it against other possums.

The natural enemies of the possums include coyotes , foxes , owls and large birds of prey . When there is danger, the opossums kill themselves. This killing is so noticeable that it became a popular expression in America as "playing possum".

Opossums are immune to snake venom and other poisons. Research is therefore being carried out into which antibodies the opossum develops against poisons.

Opossums are omnivores . They feed on insects, small vertebrates, and carrion, as well as plant material such as fruits and grains. 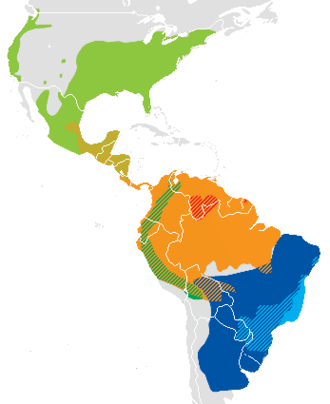 Female opossums have a well-developed pouch with usually 13 teats in it, which are arranged in a circle. After a gestation period of twelve to fourteen days (one of the shortest of all mammals), around 20 young animals are born. The newborns are one centimeter long and weigh 0.13 grams. Not all can be accommodated in the bag, those who missed out perish. They leave the bag for the first time at the age of two to three months. When there is not enough space for everyone in the bag, some young animals ride on their mother's back. They are independent at three to four months, and opossums become sexually mature towards the end of their first year of life. The female usually has two litters a year, in some cases it can be one or three.

Their life expectancy in the wild is a maximum of two to three years, specimens in captivity can live up to five years.

Opossums are the most widespread genus of the opossum and the only one that occurs in North America along with the northern opossum . The distribution area of ​​the genus extends from southern Canada over the USA to central Argentina .

Opossums are not only confused in German-speaking countries with the possum that occurs in Australia and is introduced to New Zealand from there . It is probably due to the fact that in the fur industry the fur of the possum , also called kusu , is referred to as "Australian", "Tasmanian" or "New Zealand opossum fur ".

As cultural followers, possums benefit more from human presence than many other animals. They find food in rubbish bins and on plantations, and it is said that they sometimes tear poultry, which is why they are sometimes seen and hunted as a nuisance. Road traffic is another source of danger for possums.

Opossums were hunted for their meat and are also used as laboratory animals. The opossum fur is used as fur . In the 19th century, farmers in the United States even started breeding possums.

In general, these animals are common and none of the species is endangered according to the IUCN .

In 2008, the cross-eyed opossum female Heidi received widespread media attention in Germany . The opossum Ratatouille, which snowboarded in a 2012 advertising film at a US ski resort, also attracted attention.