The Southside is an annual music festival that takes place today in Neuhausen ob Eck ( Baden-Württemberg ) on the site of the take-off commercial park . It took place for the first time in 1999 near Munich. With around 60,000 visitors, it is now one of the largest open-air festivals in Germany. The focus is on the music genres rock , alternative , independent and electro .

The name Southside is derived from the English south side ("southern area") and indicates the south of Germany. The festival organizers are FKP Scorpio and KOKO & DTK Entertainment . The festival site on a former military and airfield site has around 800,000 square meters and four stages.

The festival started in 1999 on the former military airfield in Neubiberg near Munich with around 15,000 visitors. From 2002 the number of visitors rose to over 30,000 and is now 60,000. According to the organizers, sales between five and ten million euros will be achieved on a festival weekend.

The medical guard is provided by the Malteser Hilfsdienst , the Johanniter-Unfall-Hilfe (regional association Bodensee-Oberschwaben) and the German Red Cross . Around 400 helpers are on duty for around 12,000 hours over the entire weekend. The Crowd surfing is prohibited at the festival.

The Southside Festival first took place in 1999 as a counterpart to the Hurricane Festival . In 2000 the company moved to Neuhausen ob Eck. Frequent acts since then have been:

The first Southside Festival took place from June 26th to 27th, 1999 with around 15,000 visitors at the former Neubiberg air base near Munich. It played:

At the end of the second day, Marilyn Manson caused an uproar when he entered the stage drunk, first presented the audience with obscene gestures, was dissatisfied with the sound and then finally left the stage after a twenty-minute performance. Then part of the audience began with an angry whistle concert and with mud and other objects pelting the stage, stormed the stage and destroyed the band's equipment. Because of this incident, the operators were not allowed to hold further concerts in Munich.

From June 23rd to 25th, 2000, the first Southside Festival took place at the new venue in Neuhausen ob Eck. On the two days of the concert:

The festival was unsuccessful due to the bad weather and the cool temperatures: around 12,000 visitors came - less than the organizers had promised. Contrary to what was expected, the music fans came not only from the surrounding area, but also from Bavaria and Austria.

The festival's popularity increased again in 2002: on June 22nd and 23rd, almost 30,000 spectators took part. The line-up consisted of:

In 2003, the Southside Festival lasted three days for the first time since 2000, from Friday 20th to Sunday 22nd June. Around 38,000 festival visitors came. The line-up was correspondingly more extensive; It was played on two stages, with the smaller stage housed in a large tent that was open at the side.

The Southside 2004 took place from June 25th to 27th and was sold out with around 40,000 visitors. David Bowie was supposed to headline but had to cancel his gig due to a heart attack.

The Southside 2006 took place June 23-25 ​​and was sold out. In 2006 there was a third stage again, on which smaller, mostly less well-known bands performed. On Sunday, June 25th, shortly after the performance of Fettes Brot, the festival was hit by a violent storm, but after a two-hour break, it was possible to continue with the performance of Seeed at around 9 p.m. The festival counted over 40,000 music fans. Line-up: 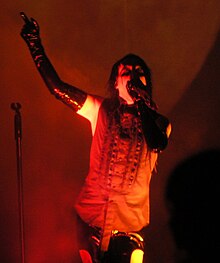 The 2007 Southside took place June 22-24. This year the capacity was increased to 45,000 visitors. Before the start of the festival, there were severe storms on Thursday, June 21, 2007, during which the tent stage ( Coca-Cola Soundwave Tent ) was badly damaged by a storm. A 28-year-old employee of the Johanniter-Unfall-Hilfe, who had sought protection from the storm in an ambulance, was injured so badly by a falling metal pipe that he died a few hours later in the Tuttlingen clinic. Another rescue service employee was seriously injured, another was seriously injured. Due to the considerable damage, all 17 concerts that were to take place on the tent stage had to be canceled. The organizer FKP Scorpio Konzertproduktion GmbH reported the fatal accident to the Rottweil public prosecutor's office against the head of a customs control. A task force from Singen's “Financial Control of Undeclared Work” had checked the Southside construction site that day. The chief inspector prevented the tent master from securing the tent construction from the impending storm.

In addition, the quarter-finals of the 2008 European Football Championship were broadcast on a large screen.

In 2009, the Southside Festival took place June 19-21. After the capacity had been increased to 55,000 spectators, the festival was not sold out with a good 50,000 visitors. The headliners were Die Ärzte , Kings of Leon and Faith No More . Other bands were

The Southside Festival 2010, which took place from June 18th to 20th, was sold out and was attended by 50,000 people. According to the organizers, 100,000 tickets could have been sold - twice as many visitors as the site holds. As an innovation, a fourth stage, the so-called "White Stage", was introduced for the first time. The tent complemented the previous main stage (“Green Stage”), secondary stage (“Blue Stage”) and tent (“Red Stage”) and was played with electro from late afternoon . The line-up of the new, second tent was under the motto "Electric Circus". The 2010 Southside Festival headliners were Billy Talent , The Strokes , Massive Attack , Mando Diao , The Prodigy , Deichkind and Beatsteaks . Furthermore belonged to the line-up

The organizer enabled public viewing of the 2010 World Cup with a screen on the camping site .

Entrance area of ​​the festival area 2010

Continuous rain turned the camping and festival grounds into an ankle-deep mud desert. A local heavy rain event that occurred on the night of June 17th to 18th ( rainfall : 80 l / m²) required a contingent of workers, iron plates, over 500 m² of wood chips and various truck trailers of straw as well as heavy technical equipment around the two entrances to make it passable to the festival site. In addition, the sheep's cold with temperatures below 10 degrees hit the visitors. For this reason, the community opened the Homburghalle, and many residents made private accommodation and shower facilities available.

A total of 1,800 people were employed on the site during the festival, including 420 paramedics and doctors, around 400 security guards and stewards, as well as stage technicians and other helpers.

From June 17th to 19th, 2011, Neuhausen ob Eck was the venue for the Southside Festival for the twelfth time. Two days before the line-up started, the festival was sold out with more than 50,000 visitors. 81 artists were hired for the festival:

Also in 2011 there were four stages - two open-air stages and two tent stages. On the fourth stage, the White Stage , which was exclusively reserved for electro act , the audience was offered an additional program of acrobatics and electronic music. Environmental protection measures such as "Green Camping", CO 2 reduction on arrival and avoidance of paper waste were new.

While the Southside Festival was still running in 2011, the organizer announced on June 19 that, despite the mud problems in 2010 and 2011, there would be another festival in Neuhausen ob Eck in 2012, regardless of the weather. A new five-year contract was concluded in 2011 for this purpose.

Two headliners for the 2012 festival were confirmed well in advance: blink-182 , who originally should have performed in 2011, and Die Ärzte , who performed in 2002, 2005 and 2009. Because of the mud problems, a six-figure sum was again invested in the subsoil on the site, and some lawns were to be graveled. It played:

The 2013 Southside Festival took place June 21-23. With 60,000 visitors, the festival was sold out. There were performances by:

The Southside Festival was scheduled to take place June 24-26. It was interrupted due to a severe storm after the first band appearances on early Friday evening and finally canceled completely, which meant that none of the headliners could perform. Of the 88 booked bands, only 18 could play, with the concerts of Tom Odell, Elliphant and Flogging Molly ended prematurely. 82 people were slightly injured. Planned line-up:

The Southside Festival should have taken place on the weekend of June 19-21, 2020, but was canceled due to the ban on major events due to the COVID-19 pandemic . The announced line-up consisted of: