Alternative [ ɒlˈtɜːnətɪv ] is a collective musical term that has been used synonymously for DIY , underground and independent music in the USA since the late 1970s and became popular in the 1990s as a way of separating it from the mainstream of the time. With the success of grunge and crossover, the term became a collective musical term internationally. With increasing success, the term alternative grew increasingly into a comprehensive collective term for every form of commercially successful music that developed from the underground. 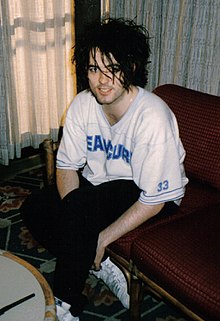 Robert Smith and The Cure were one of the established indie bands in the mid-1980s.

In the late 1980s and early 1990s, major labels discovered the bands from the independent environment for themselves. The success of artists as diverse as The Stone Roses , Pixies , The Cure , REM , U2 , The Smiths or Hüsker Dü changed the perception of alternative music up to now. As a result of this development, already well-known bands as well as new performers were able to sign major contracts. The term "alternative" replaced the term independent, which was linked to the aspect of commercial independence, and casually categorized artists who can be under contract on both an independent label and a major label. Against this background, alternative is also an umbrella term that was placed for reasons of market policy and media impact. Alternative thus also transfers the creative function of the underground in the search for new forms of expression and sound structures into a context that is mass-compatible and used by the media and market economy.

“The scene continues to propagate distance, otherness and nonconformity, but the supposed alternative has long since tended towards the industrial mainstream. Massive record sales in the millions, stadium tours, an insane flood of merchandise items and multimedia documented airs of the protagonists symbolize the complex market economy value of a boom that continues to the present [1996], propagates itself and always produces new variants. "

- Marcel Anders - Alternative for how much longer?

Regional aspect of the term

A regional reference also plays a role. The term "independent" was rarely used in the USA. It prevailed primarily in Europe and Australia and was mainly used in America for the British Independent. If one considers the origins of alternative , this term fills a gap from the American point of view. The thesis of regionality is also supported by the extension of the term alternative to originally American styles, which are also dominated by bands from the USA (e.g. alternative country or alternative metal ).

The MTV show "Alternative Nation" contributed significantly to the spread of the term since 1992. In Germany, since 1993, magazines such as the Zillo Musik-Magazin had the designation "alternativ (e)" on the cover. At this point in time, electronic techno / house styles and commercial R&B dominated the music charts .

In the course of the alternative hype, Björk also had international success.

The defining development of the alternative lies particularly in the musical development of the post-punk era. According to Dave Thompson, the mid-1970s is the origin of the alternative. The releases of Lou Reed's Metal Machine Music and Patti Smith's album Horses, as well as the founding of the Sex Pistols , sparked a wave of pop culture that resulted in a sustained blending of musical styles and ongoing subcultural development. In particular, the post-punk era between 1978 and 1984 is said to be as culturally influential as the 1960s in terms of the creative and musical development of Simon Reynolds.

After terms such as new music , new wave , independent and post-punk were initially used for the music of this phase , the term alternative came up in the USA in the mid-1980s and established itself in the 1990s. When Nirvana released Nevermind in September 1991 at this time , they and the entire alternative experienced a lasting hype that changed the music landscape.

A large number of musical genres are subsumed under the term alternative . The styles are widely divergent and, in addition to the large areas of alternative rock , alternative metal and alternative country, also extend into pop music , electronica and electronic dance music as well as hip-hop . The alternative music styles are neither mainstream nor underground and are temporarily assigned to a mainstream of minorities . This includes, for example, garage rock , trip-hop , big beat , dark rock , electroclash or future pop . Retrospectively, styles that were already popular before the term was established are often assigned to the alternative.

Dave Thompson subsumed the entire stylistic development that proto-punk led under the term alternative. In this comprehensive understanding of the term, punk , gothic rock or synth-pop also fall into the alternative. In terms of stylistic diversity, different youth cultures such as nu metal , emo or grunge developed on the basis of musical styles from the pool of the constantly renewing alternative , even after the 90s that shaped the alternative.