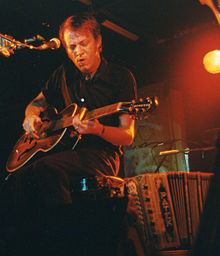 Alternative Country , Americana , Insurgent Country and the somewhat broader term Roots Rock are genre names for music that was created in the late 1980s and combines the attitudes and playing styles of punk and independent with an increased interest in folkloric, original American music; especially country , but also blues and folk . Performers like 16 Horsepower also combine alternative country with elements of neo-folk .

Alternative country differs from today's mainstream country on the one hand by taking up the roughness and aggressiveness of punk, on the other hand by a return to the original simplicity in the arrangements, as they were in the early country music recordings of the 1920s to 1950s Hank Williams and the country rock pioneers The Byrds , Flying Burrito Brothers and Gram Parsons . In the lyrics, Alternative Country mainly deals with the darker sides of the American dream: loss, failure, dependence and death. These are classic country themes interpreted from a postmodern point of view.

Origin and development of the term

As early as the 1980s, several American independent and post-punk bands and artists such as Green on Red , REM , Giant Sand , Russ Tolman , Blood on the Saddle and The Gun Club integrated country elements into their music.

Various bands were inspired by these albums, such as B. the Jayhawks , Freakwater or Whiskeytown . In the mid-1990s, large record companies such as Warner Brothers tried to market the musical phenomenon, but the attempts mostly failed. The major label Universal set up the sub-label Lost Highway for the genre , on which some stars of the scene such as Ryan Adams and Lucinda Williams are represented. Most alternative country musicians, however, publish on small labels that are often run by music fans, such as B. Bloodshot in Chicago . Often they cannot live on the income they earn from music, but they place more value on artistic independence than on commercial success.

Many of the bands in Europe (Great Britain, Benelux, Germany) have enjoyed success, which is partly due to committed labels such as Glitterhouse and Blue Rose . The new interest in country music beyond the dominant top 40 country radio stations also meant that bands such as Giant Sand or, above all, Lucinda Williams, who had been completely unsuccessful for a long time and who had already played similar music in the 1980s , came to fame.

Even old stars of the genre, who had not been played on the radio for a long time, benefited from the boom, for example Johnny Cash , whose career seemed to be over in the early 1990s. In 1994, the first album in his American Recordings series, produced by heavy metal and hip-hop producer Rick Rubin , was released: Rubin suggested Cash current rock songs, but also classics for interpretation, which were enthusiastically received by a young, metropolitan audience . Even Emmylou Harris , the 1996 Wrecking Ball completed the break with the traditional playing style of the country, worked with several representatives of the alternative country together, such as Steve Earle and Ryan Adams .

The term alternative country has been used differently over time. In the meantime, it is often used to describe all musicians who for various reasons do not fit into the mainstream. Examples are Dwight Yoakam or Rodney Crowell , with Yoakam expressly insisting that he play pure country music. Others such as Kelly Pardekooper , Mary Chapin Carpenter or the Texan Terri Hendrix are musically rooted in country, but are usually referred to under the genre term songwriter . The same applies to some of the forerunners of anti-folk such as B. Ani DiFranco or Michelle Shocked , who are musically more folk than country. Other well-known performers are Lambchop , Calexico , Azure Ray , 16 Horsepower , The Walkabouts , Wilco and Son Volt (the latter two bands were formed after the breakup of Uncle Tupelo).

In the mid-1990s , a music scene emerged in Denver , Colorado , which, starting from country, often crosses musical boundaries. "There's something absolutely bizarre going on musically in Colorado right now" described Jello Biafra , label boss of Alternative Tentacles and former head of the punk band Dead Kennedys, a phenomenon that is difficult to classify. The music is characterized by dark sarcasm or apocalyptic spirituality ( David Eugene Edwards ). Representatives of the Denver Sound include 16 Horsepower , Woven Hand and Tarantella .