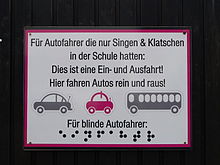 Sarcasm describes biting, bitter ridicule and scorn , in literature often in the form of satire or - exacerbated - polemics , a form of criticism of social conditions of various kinds.

Sarcasm is a Latinized Greek noun ( ancient Greek σαρκασμός sarkasmós "the mangle, the biting mockery", to σαρκάζειν sarkazein "tear your mouth, mangle, ridicule ", this from σάρξ sarx "the rohe "). The figure of speech of sarcasm was already used in ancient rhetoric (e.g. Demosthenes , Cicero ).

Sarcasm, that is, biting mockery, can be expressed through direct statements of what is meant or through irony . For example in these sentences:

A: "There are many psychotics who do not feel any psychological stress." B: "Unless they go to psychiatry."

If sarcasm is expressed using irony, i.e. with a reversal of the meaning of the statement, this is often made clear by a special tone of voice. An example:

Instead of working, a worker sits on a bench and rests. His boss sees this and says to him: "Don't overwork yourself."

To be able to recognize irony - whether sarcastic (that is, bitingly mocking) or non-sarcastic intended - different parts of the brain have to work together. If a person does not understand the social situation (for example because of an information processing disorder in the brain as in autism , because of damage to the anterior lobes of the brain, because of a language barrier, because of cultural divergence or because of a lack of practice or intelligence), they can irony - and thus ironic sarcasm - do not identify as such.

Authors often find it difficult to mark irony as such, so that even a healthy reader can often not classify it correctly. Thus, according to the author, a sarcastic contribution to a discussion in an Internet forum led to an indictment against him - for lack of express distancing from the statement by marking it as irony.

Since the intention of a mockery is known only to the mocker himself, it is extremely difficult to distinguish it from outside. What the terms have in common is the fact that the attacker offers less counter-attack surface than if he were to proceed objectively.

Mockery is often more open and straightforward than sarcasm; the latter is often more subtle and ambiguous. Therefore, some sarcasm can e.g. B. criticize a dictatorial regime without the sender of the sarcastic message ending up in jail.

Colloquially, sarcasm is often viewed as a form of irony , or irony is seen as a nice variant and sarcasm, on the other hand, as serving the attack, sometimes even as mockery and attack strictly separated from irony. In reality, however, irony is a technique, a means of expressing something, while sarcasm describes a specific intention of a statement, regardless of the linguistic means with which it was formulated. Irony describes statements that are formulated as the opposite of what is actually meant; this can be used to protect the speaker or to reinforce the statement. Sarcasm is bitter, biting mockery - regardless of how what is meant is expressed, whether directly or indirectly through irony.

For Arthur Schopenhauer , irony is objective. Through exaggeration or understatement, she points to the other side, whereby she allows the Janus nature of the apparitions to apply with humor. Sarcasm, on the other hand, is one-sided; his downside focus is on annihilation.

In contrast to sarcasm, cynicism is not bitter ridicule, but an attitude that rejects central norms and moral concepts and considers them ridiculous. Cynicism therefore denotes a characteristic phenomenon; this can be expressed in cynicisms, which cannot always be distinguished from sarcastic remarks.

In contrast to sarcasm, sardonism (in connection with laughter) does not mean scornful or malicious, but grim, painful ridicule.