This article describes the music style. For the US wrestler, see Johnny Grunge .

Grunge (German "Schmuddel", "Dreck") is a rock music genre and a subculture. Grunge is a music style that was particularly popular in the 1990s and whose origins and beginnings lay in the US underground movement . Also known as the Seattle sound , grunge is often viewed as a mix of punk rock and heavy metal . The early grunge movement revolved around Seattle's independent record label Sub Pop and the area's underground music scene .

The "grunge sound" is mainly based on the guitar sound of hard rock of the 1970s (especially traditional, earlier heavy metal groups like Black Sabbath (clear influence, for example on Pearl Jam )), and the aesthetics of punk rock (especially American hardcore Punk like Black Flag ). Alex DiBlasi believes that indie rock was a third key source, with the main influence being due to the "freeform" sound of Sonic Youth . While some of the bands were moving more in the direction of metal ( Soundgarden , Alice in Chains ) and others were more dedicated to the punk rock influence ( Nirvana , Mudhoney , 7 Year Bitch ), the characteristic " Seattle Sound ”. Seattle music journalist Charles R. Cross defines "grunge" as distorted, down-tuned, and riff-based rock that uses loud and heavy, lumbering feedback " basslines to support its song melodies.

Grunge music has what is known as an "ugly" aesthetic, both in the roar of the distorted electric guitars and in the darker lyrical themes. This approach was chosen both to counteract the "smooth", elegant sound of mainstream rock, which was predominant at the time, and because grunge artists reflect the "ugliness" they saw around them and shed light on invisible "depths and depths." Wanted to cast depravity "of the real world

The term grunge first appeared as a paraphrase for a type of music in the 1960s and 1970s to describe the style of some bands. At that time, grunge was seen less as a subgenre , but as a particularly striking but appropriate adjective for a rough and “dirty” sound. Neil Young (& Crazy Horse), The Stooges and The Velvet Underground, for example, stood out in comparison to other bands in the rock genre at that time, as they were quite willing to experiment with feedback effects - acoustic feedback, especially the e- Guitar . In addition, her guitar playing often seemed less “clean” and “smooth” than that of the musical references of these decades. Rather, the sound should appear raw and unpolished, which was emphasized by the use of distortion effects. Also, the recordings were usually little or no editing in the studio. As a result, the music seemed generally “unconventional” and “independent”. This style shaped the sound of the Seattle music scene, which emerged in the late 1980s and early 1990s. Only since this time and through the steadily increasing popularity of bands such as Nirvana , Pearl Jam , Alice in Chains or Soundgarden has "grunge" been used as a term for a subgenre of rock music. 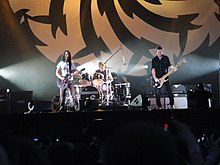 Among the first bands to experiment in this field were Wipers and Mission of Burma , whose style was too rocking or, in the case of Mission of Burma, too complex for the prevailing punk audience in the late 1970s and early 1980s. Hüsker Dü , whose origins lay in the punk scene, followed later . They combined the energy of punk rock with the more complex songwriting of rock and reached a larger audience by the mid-1980s. Dinosaur Jr. moved one step further , with their closeness to classic rock in the style of Neil Young and an extremely overdriven guitar sound with wah-wah effects, in the style of garage rock of the 1960s. Kurt Cobain , Sonic Youth and other grunge exponents named Neil Young as their main source of inspiration, which is why he is also known as the "Godfather of Grunge". Other influences were Sonic Youth, Big Black , Butthole Surfers and other representatives of noise rock . The releases of entire music labels such as Homestead Records , SST Records or Amphetamine Reptile were decisive. The scene was shaped by college radio stations, which often played this independent music, as well as the more provincial character of the Seattle region, an area in which only unknown musicians were looking for a performance opportunity.

In the mid-1980s a core formed in the Seattle scene, which included Green River , Soundgarden and The U-Men as well as The Melvins . At this point in time the term grunge was also used as a genre term.

In 1988 the Sub Pop Singles Club was founded in Seattle - a record label on which the first recordings by local bands such as Tad , Mudhoney , Nirvana and Soundgarden appeared. Much of the recordings were produced by Jack Endino, and a sound emerged that was thought fit to be marketed as the "Seattle Sound" . A year later, a rock journalist for the British Melody Maker magazine became aware of these productions, whereupon in March 1989 the article “Seattle, Rock City” appeared. This article caused a great stir in Seattle. The rest of the world initially showed only moderate interest.

That changed suddenly when the album Nevermind by Nirvana was released in September 1991 . Trigger of grunge - hype was the song Smells Like Teen Spirit , who appeared on this very album. Thanks to the frequent use of the music video on the music television channel MTV , it became a hit. The music industry and the media developed a keen interest in the Seattle music scene. Spin magazine described it in the December 1992 issue: “Seattle is to the rock world at the moment what Bethlehem is to Christianity.” Unrecorded bands were suddenly signed. Other bands that were already under contract with an independent label were passed on to the big record companies via distribution agreements. The commercialization of the scene was quick. Distinctive items of clothing like the flannel shirt were sold as new fashions. Flannel shirts have been a popular item of clothing for young and old for decades in the Seattle area. This is how a banal everyday object became the dress code of the new grunge scene.

Grunge came to an abrupt end not only with the death of the singer Kurt Cobain from Nirvana in April 1994 . The cause was also the growing personal or artistic differences within some bands, which were additionally fueled by external pressure (press, media). In addition, an unusually high number of grunge musicians had drug problems, which put a considerable strain on bands like Alice in Chains or the Stone Temple Pilots .

The Grunge - hype was with the critics a popular target. The development shows how the music industry with a handful of bands and their demeanor in terms of appearance and attitude produced a hype that it still draws on today. But in addition to the desired aspect, the entering into the focus of public perception, there were also negative aspects. So it happened that after Cobain's death most of the grunge bands disbanded or disappeared from the field of view of the broader masses.

All metal genres had lost popularity with the rise of grunge. When asked in 1994, Joey DeMaio from Manowar commented on the grunge scene: “Is there a word for something that is still under shit in terms of rank?” Whether it is the frustration of losing one's own popularity or is it a typical one for the band to maintain their true metal attitude is an open question.

“We felt like these Seattle grunge bands killed all the fun in rock and roll. There were no more light shows, no cool clothes, no effects. The musicians dressed like bums. That's why hip hop got so big. At least the artists talked about cash and brides again and not about how shitty life is. "

The fact that grunge had such an all-round impact and changed mass tastes so much came as a surprise to many musicians at the time. In addition to frustration and negative criticism, there were also positive voices, for example from John Such, the former bassist of Bon Jovi , who praised grunge as "refreshing", or from Sebastian Bach , who welcomed the new, different sound. It is ironic that grunge died around 1997 for reasons similar to that of glam metal . The Metal Hammer editor and author Frank Thiessies smugly adds that today grunge, even if titled as alternative rock , and sleaze rock coexist in harmony, even if not like at the respective heyday and throws into the room why nobody that Ask if Nu Metal has made rock and metal much harder to deal with. However, the great distance between listeners and Glam Metal already in the mid-1990s appears worrying. Many now no longer seemed to want to admit that this “dull, clichéd, but simply stunning robber music” had been so important to them a few years earlier.

Conversely, another genre of rock music, britpop , emerged in part in response to the dominance of grunge in the UK. In contrast to the rumble of grunge, Britpop was defined by "youthful exuberance and a desire for recognition". Britpop artists have been vocal about their disdain for grunge. In a 1993 interview with NME, Britpop band Blur's Damon Albarn agreed with interviewer John Harris's claim that Blur was an "anti-grunge band" and said, "Well that's good. If it's im Punk was about getting rid of hippies, then I'll get rid of grunge ".

Well-known films that have something to do with or contain something directly related to the grunge music from Seattle are e.g. B .: