This article is about rock musician Patti Smith. For the singer from Scandal, see Patty Smyth . 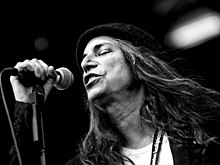 Patricia Lee "Patti" Smith (born December 30, 1946 in Chicago , Illinois , USA ) is an American poet , punk and rock musician , singer-songwriter , photographer and painter . She is considered the " Godmother of Punk ".

Patti Smith comes from a poorer family with religious ties to Jehovah's Witnesses . She finished school at the age of sixteen and then started working in a factory. At the age of eighteen, Patti Smith gave birth to a daughter who she put up for adoption. She moved to New York City , where she met the artist and Robert Mapplethorpe , who later became famous as a photographer, in the summer of 1967 , and lived with him for several years. Numerous photographs come from him, some of which were used for her later record covers.

In 1969 she began publishing her Beat Generation- influenced poetry in magazines such as Rock and Creem . Travels took her to France, where she, among other things, visited the tombs of their idols Jim Morrison and Arthur Rimbaud . Her friendship with Lenny Kaye , Sam Shepard , Todd Rundgren and Tom Verlaine (then with the proto-punk group Television ) encouraged her to do her first single, Hey Joe , in 1974 , in which Patti Smith described the then current kidnapping of Patty Hearst , the Granddaughter of newspaper magnate William Randolph Hearst , processed. According to her own statements, for her singing was above all an opportunity to recite her poems, as she "happened" to land in music. She sees herself primarily as a poet and writes with discipline every day.

As early as the late 1960s she had established close ties to rock musicians, especially the New York avant-garde hard rock band Blue Öyster Cult . She was in a relationship with their keyboardist Allen Lanier from 1971 to 1978 and lived with him in Manhattan on Fifth Avenue. She has provided lyrics for the group's songs for years including Baby Ice Dog , Career of Evil , The Revenge of Vera Gemini (where she recites and sings), Debbie Denise , Fire of Unknown Origin and Shooting Shark . 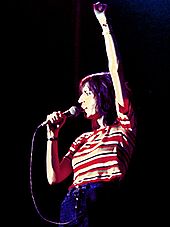 In 1975 Horses was released , the first LP of the later Patti Smith Group with Lenny Kaye, Ivan Král , Richard Sohl and Jay Dee Daugherty. The band became the forerunner and role model of the English and American punk and new wave movement . Patti Smith also established himself as an icon of the new women's movement .

The freely associative lyric, which Patti Smith laid half breathlessly, half syncopated over seemingly primitive rock chords, gave her songs and the cover versions she chose ( Gloria by Them , My Generation by The Who ) a rebellious and nervous appeal.

The album Radio Ethiopia followed in 1976 . In 1977 Smith broke two vertebrae in a serious accident on stage and had to sit out for a while. The following year she released her only album, Easter , which was also a commercial success. The single Because The Night was released from a collaboration with Bruce Springsteen and reached number 5 in Great Britain. In 1979, Wave was their last LP for a long time.

Patti Smith in the Rosengarten (Mannheim) 1978

In the 1980s she lived with her husband, guitarist Fred "Sonic" Smith ( MC5 ) and their two children in Detroit , where she worked as a bookseller. A comeback attempt with the album Dream of Life (1988) was slowed down by the death of Richard Sohl (1990) and her husband (1994). She then returned to the stage, "to earn money", according to her own statements. After 1996 and the album Gone Again , Patti Smith regularly delivered new works. In 2002 she released a cover version of the Prince song When Doves Cry , and her CD Trampin ' , released in April 2004, features the Horses line-up with Lenny Kaye and Jay Dee Daugherty. In April 2007 her album Twelve was released with twelve new recordings of rock classics such as Smells Like Teen Spirit by the band Nirvana and Gimme Shelter by the Rolling Stones .

The photographs that she took over decades with her vintage Polaroid Land 250 instant camera are shown at exhibitions around the world, including an exhibition with photos by Christoph Schlingensief , with whom she was friends.

The documentary feature film Dream of Life (2007) by Steven Sebring about Patti Smith's life, which she had dealt with for more than ten years, premiered at the Berlinale 2008 . The 2008 Sundance Film Festival honored the film with the “Excellence in Cinematography Award: Documentary”.

Patti Smith met Pope Francis in April 2013 on the sidelines of a general audience in St. Peter's Square . In doing so, she kept a promise she made when the Pope was elected. In 2014 she performed in the Vatican and answered the question why a singer, who started her first record with Jesus died for someone's sins, but not mine , sings in front of the Pope:

In December 2016, Patti Smith accepted the Nobel Prize for Literature , on behalf of her friend Bob Dylan, in Stockholm , where she performed, among other things, Dylan's song A Hard Rain's a-Gonna Fall . Patti Smith then published the essay How Does It Feel in The New Yorker , in which she tells how she had to interrupt the play because she was overflowing with emotions.

In 2017 she bought the house of the French poet Arthur Rimbaud in Roche . Rimbaud grew up there and wrote his work A Time in Hell there in 1873 . Patti Smith writes in her autobiography Just Kids about Rimbaud: "I hugged him as a compatriot ... as a relative, even as a secret lover". 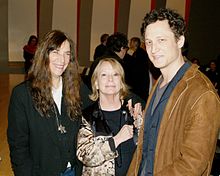