Olli Schulz at the ZMF 2018 in Freiburg

Oliver Marc "Olli" Schulz (born October 15, 1973 in Hamburg ) is a German singer-songwriter , actor and presenter . He became known as the singer and guitarist of the indie rock group Olli Schulz and the dog Marie and as a sidekick for Joko and Klaas in their television programs such as Circus HalliGalli . He has also been moderating the podcast Fest & Flauschig on Spotify since 2016 together with the satirist Jan Böhmermann .

Olli Schulz grew up with his great-grandparents until he was 9 and then with his parents in Hamburg . He worked as a young adult long time as a stagehand and roadie for various national and international artists. Schulz is divorced. He now lives in Berlin-Grunewald and is the father of a daughter.

Olli Schulz wrote his first songs as a teenager. His long-time friend Marcus Wiebusch , front man of the band Kettcar and co-owner of the label Grand Hotel van Cleef convinced Schulz to bring out a record on this label. Together with his friend Max Schröder , he released the album as Olli Schulz and the dog Marie in 2003, if you break my heart, then I'll break your legs . The beige album was released in 2005, followed by the third album Waiting for the Boomerang , for which the group switched to EMI .

Olli Schulz released a few songs under the pseudonym Bibi McBenson , such as Backstage Baby on the single Now you're good, and an album that was released on various Internet file sharing sites while waiting for the boomerang . At the same time, Olli Schulz and the dog Marie released their third album under the same title. Schulz also appeared occasionally at concerts as Bibi McBenson. With Dennis Becker (Tomte, Olli Schulz and the dog Marie), Thorsten “Nagel” Nagelschmidt ( Muff Potter ) and Rasmus Engler ( Gary ), he also founded a Bibi McBenson band, which in 2006 played an alleged reunion concert in Vienna . This appearance was recorded for the documentary Bibi Is Back , which was presented in early 2010 in the opening act for Schulz's An Evening with Olli Schulz tour . 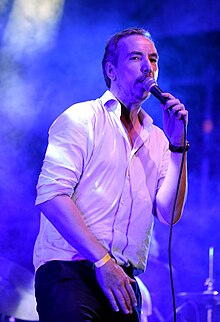 Since Max Schröder was meanwhile a permanent member of Tomte , from 2005 Olli Schulz increasingly appeared alone. He also recorded his fourth album, It burns so beautifully , as a solo artist. In the meantime, the musicians planned to continue their collaboration as Olli Schulz and the dog Marie in 2010 with a new album, but this was not realized.

In the run-up to the publication of Esbrennt So schön , Olli Schulz competed in the Bundesvision Song Contest in February 2009 with the song Mach den Bibo für Hamburg and came in fifth. With this song he also achieved an entry in the German single charts for the first time .

In 2011, Johanna Steiner wrote and sang the closing song “Die Welt hat Geburtstag” for the New Year's Eve radio play overnight in the listening lounge . Schulz began recording his fifth album back in 2010, which was released on March 16, 2012 under the title SOS - Save Olli Schulz and reached number 32 in the charts.

In 2014 Schulz recorded a new studio album together with a band around Gisbert zu Knyphausen (bass), Arne Augustin (piano, keyboards) and Ben Lauber (drums) in the Berlin Hansa recording studios . The album entitled Feelings aus der Asche was released on January 9, 2015 and entered the German album charts at number four.

In 2018 his solo album Scheiß Leben, well told was released.

In 2019 Schulz had a guest appearance together with Jan Böhmermann in the Deichkind song Quasi .

Activities in radio and television

On the radio station Fritz of Rundfunk Berlin-Brandenburg , Olli Schulz had a column with the title Ein Schulz - a song that was also published as a podcast from late 2005 to early 2008 . There he played a short song on a specific topic every week, often inspired by his audience. Schulz also adopted some of these songs in his regular repertoire.

From July to December 2009, Schulz presented the weekly talk show You FM Nightline on the radio station You FM for a few months as a substitute for the presenter Patricia Pantel .

Furthermore, until April 2016, Schulz moderated a radio program with Jan Böhmermann on Radio Eins (RBB) every Sunday with the name Gentle & Careful . Previously, he had hosted a Sunday radio show every other week with Joko Winterscheidt called 16 and Zwei , which ended in March 2013. From May 25, 2014 to April 3, 2016, Soft & Careful was broadcast on Sundays alongside Radio Eins from five other radio stations - Bremen Vier , Dasding (SWR), N-Joy (NDR), Puls (BR) and You FM (hr) - broadcast. According to ARD, Sanft & Sorgfaltig had "a top position among podcasts in Germany". After the discontinuation of Gentle & Careful , Schulz and Böhmermann switched to the Spotify streaming service , where the Fest & Flauschig podcast has been running since May 2016 . The podcast is one of the most streamed podcasts on Spotify worldwide.

In October 2009 Schulz invited celebrities to his own talk show Bei Olli on NDR television . However, the broadcast was not continued, according to Olli Schulz, the broadcaster has not contacted him again, he therefore assumes that no further episodes will be produced.

From 2011 he appeared regularly on the television program neoParadise , which was broadcast on ZDFneo , among other things with his rubric “Erotik aus Deutschland”. He was an integral part of the now discontinued show and led u. a. also continued the role as Charles Schulzkowski from February 2013 in the follow-up program Circus HalliGalli on ProSieben . His regular appearances with Joko Winterscheidt and Klaas Heufer-Umlauf also gave rise to the Rangel Song , which made it into the top 30 of the German music charts - and number 1 on the German iTunes charts. He also moderated the special Joko versus Klaas - The toughest duels around the world , which was broadcast on ProSieben on March 15, 2014.

At the end of August 2013, ProSieben broadcast the pilot episode of its own program with Schulz under the title Schulz in the Box . The first episode of this broadcast format received positive reviews in the media. The idea of ​​the format in particular, but also Schulz himself, received great praise. Further episodes were broadcast during the winter break of Circus HalliGalli in February 2014. The series was nominated for the German Television Award in 2014 in the “Docutainment” category. In 2014 Schulz shot more episodes and then announced that he would concentrate more on his music career in the future. After broadcasting the last episodes with Olli Schulz, the concept of the show as a star in the box is to be continued with changing celebrities.

In January 2016, Schulz played in the episodes Friends and Rebels of the series The crime scene cleaner . Furthermore, Olli Schulz went on air with Jan Böhmermann on ZDFneo with the talk show Schulz & Böhmermann from January 10, 2016 to December 3, 2017 .

The annual review Mr. Strunk, Mr. Schulz and the year 2016 , broadcast on NDR in December 2016 , for which Schulz was in front of the camera with Heinz Strunk , was nominated for the Grimme Prize in the entertainment category.

In autumn 2008, Olli Schulz went on a reading tour entitled Rock 'n' Roll forgives you nothing , during which he presented several short stories from his experiences as a record seller, stage hand and tour guide. These stories were due to appear as a book in 2010 under the title Horseworld .

In 2013 he took part in the fairy tale project Once upon a time and when she didn't and read Rapunzel for this double CD.

Olli Schulz has been supporting the Hamburg charity campaign Kicken mit Herz as a kicker in the Hamburg Allstars team since 2012 .

Olli Schulz made his acting debut in December 2014 in the movie Bibi & Tina: Vollziext! in which he plays the villain Angus Naughty.

Since May 2016, Olli Schulz and Jan Böhmermann have been moderating the podcast Fest & Flauschig on Spotify, which can be viewed as the follow-up program to Gentle & Careful .

In August 2016 the film Antonio, he doesn't like it! , in which Schulz plays alongside Christian Ulmen . Schulz also took part in the computer animation film Sing, released in December of the same year, as the voice actor for the character Eddie.

In 2018, Olli Schulz and Fynn Kliemann took over the houseboat of the singer Gunter Gabriel , who died in June 2017 , which is to be used as a studio for small TV and music productions after renovation.