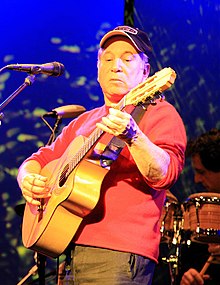 A singer-songwriter (Engl. For singer / songwriter ) is a musician who writes his own lyrics set to music, and sings and his song usually with guitar , piano or other instruments accompany themselves.

The term usually refers to English speaking singers. Correspond to that

Development history in the Anglo-American area

Around 1965 a term was sought for a form of music and performance that became popular primarily through Bob Dylan . Musicians and singers such as Joni Mitchell , Laura Nyro , Tim Buckley , Patti Smith or Leonard Cohen with very different musical bases shaped their own genre from the late 1960s onwards through their specific appearance. Folk bands created their pieces together, while singer-songwriters wrote music and lyrics alone and interpreted them partly solo with guitar or piano , partly with a small band.

In contrast to traditional folk or country music with acoustic guitar and harmonica , the use of electric guitars was no longer unusual. Singer-songwriters were increasingly incorporating rock elements into their music. In addition to political content, private topics were also discussed in text form. There were also musical influences from soul , jazz and psychedelic rock .

One of the singer-songwriters who finally established the genre in the early 1970s was Carole King , whose 1971 album Tapestry sold more than 25 million copies. At the 1972 Grammy Awards she received four awards, something that no artist had achieved before. Her song You've Got a Friend is considered a milestone in the genre.

From the end of the 1980s, for example, with Suzanne Vega, there were again mainly female artists who joined the singer-songwriter tradition. Tracy Chapman , K.D. Lang , Alanis Morissette , Sheryl Crow and Tori Amos have been successful since the 1990s . The youngest internationally successful singer-songwriters include James Blunt , Katie Melua , Amy Macdonald , Ed Sheeran and Milow .