Joni Mitchell , CC (* 7. November 1943 as Roberta Joan Anderson in Fort Macleod , Alberta ) is a Canadian musician , composer and painter . With her folk- inspired poetic pop songs, she is one of the most important singer-songwriters of the 1970s. She accompanies herself on the guitar , less often on the piano .

Joni Mitchell grew up in a small Canadian town as the only child of a shopkeeper and Air Force soldier and a village school teacher who taught her Shakespeare above all else. 1951 there was a polio epidemic, and the age of eight, she contracted polio . The result was a slight paralysis of the left hand, which is why she preferred to use open tunings when playing the guitar . She later said:

“My left hand is a little awkward because of polio. I had to simplify the chords for the left hand, but I longed for chord progressions that I couldn't achieve with the standard tuning without an extremely flexible left hand. "

She has been a smoker since she was nine . When she was eleven, her family moved to Saskatoon . Pete Seeger songs had a huge influence on her.

In 1962 she started in Calgary , where she attended the Alberta College of Art's graphics class after school, studied art and bought a ukulele . On Halloween 1962, she made her first paid gig in a Saskatoon cafe. She was aware of its optical effect; In 2015 she said:

“Life is difficult when you are beautiful. You're better off if you look average. And you have a better chance of finding true love. "

When she became pregnant, she dropped out of college. She kept the pregnancy a secret from her conservative family and gave up the child, born on February 19, 1965, for adoption . In 1997 she found her birth daughter, but in 2001 the relationship broke up.

In 1965, Mitchell met her future husband, Chuck Mitchell, a Michigan folk singer . With him she moved to Detroit , USA , where they made music together. However, the young couple did not stay together for long, and it was during the period of separation that they wrote their first songs. The marriage ended in divorce in 1968.

In October 1965 she met Neil Young in Winnipeg , with whom she became friends. His song "Sugar Mountain" soon became part of their repertoire, their "Circle Game" is considered an answer to this song. In 1973 Young dedicated his song "Sweet Joni" to her. On their later album Hejira he played the harmonica, and in 1976 there was a surprising first live performance together.

The artist went to New York and with her songs quickly became an insider tip in the local club scene, which was the center of folk music in Greenwich Village in the 1960s . Here she began an intense love affair with her compatriot Leonard Cohen , which lasted barely a year. Cohen introduced her to the works of Federico García Lorca and Albert Camus , which had an impact on her songwriting at the time. Joni Mitchell also wrote several songs about her relationship with Cohen, u. a. "Chelsea Morning", "Rainy Night House" and "A Case Of You". David Crosby , who had left the Byrds and was now a member of Crosby, Stills, Nash and Young , volunteered to produce their first album, which was released in 1968 under the title Joni Mitchell . Her notoriety spread across the United States. In the folk scene it quickly gained cult status, which continues to this day.

In 1968 she lived in Laurel Canyon , where she met Graham Nash , who admired her as a songwriter. She had a relationship with him for two years. This is what the song My Old Man from their 1971 album Blue is about . For his part, Nash wrote the CSN & Y track “Our House” to Jonis Piano, which appeared on the album Déjà Vu .

In 1969 she was invited to perform at the legendary Woodstock Festival . However, she was unable to reach the festival site due to the enormous crowd. Shaken by the energy that this festival exuded on the entire generation, she wrote the hymn to the festival with the song "Woodstock". Matthews Southern Comfort ( # 1 on the UK Singles Chart ) and Crosby, Stills, Nash and Young each had a big hit with covers of the song. Joni Mitchell also influenced other musicians. For example, the Scottish rock band Nazareth landed a single hit in 1974 with a cover version of their song "This Flight Tonight" from their album Blue . For Judy Collins , she wrote the hit Both Sides Now , which was later often covered, in 1967 , which Mitchell also sang with guitar accompaniment on her album Clouds in 1969 (in open D-tuning, chord voicings with just two fingers and capos in the fifth fret) . After Collins also interpreted Frank Sinatra and Bing Crosby and with a version for jazz guitar Pat Martino (1974 on Consciousness ) Mitchell's song. 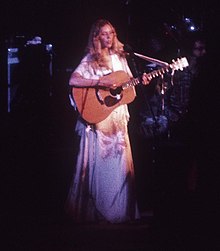 Joni Mitchell during the Court and Spark Tour in Anaheim, 1974

Mitchell had great artistic and commercial success in the first half of the 1970s, first with the album Ladies of the Canyon (1970); at the time she was in a relationship with Graham Nash .

From the summer of 1970 to the spring of 1971 she was in a relationship with James Taylor ; she covered the breakup of the relationship due to Taylor's success on Blue (1971), which was less folk-oriented. This was followed by For the Roses (1972). After the breakdown of her relationship with Jackson Browne , she tried to take her own life in 1972. The songs Car On A Hill and Trouble Child deal with this phase of life. Court and Spark followed in 1974 .

From 1975 jazz influences came to folk with the album The Hissing of Summer Lawns . At the time, she had a relationship with John Guerin which led to their engagement. In 1976, she took with her song "Coyote" at the farewell concert The Last Waltz by The Band in part.

The jazz influence continued on the 1976 album Hejira with Jaco Pastorius (bass), the 1977 album Don Juan's Reckless Daughter and the 1979 tribute album Mingus for Charles Mingus . The latter contained four Mingus compositions, to which Mitchell wrote texts. During this time she had a relationship with Don Alias . In 1980 she released the jazz-oriented live album Shadows and Light with Pat Metheny , Michael Brecker and Jaco Pastorius. 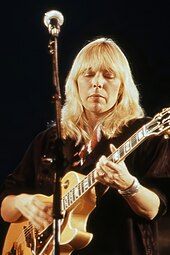 While Mitchell had released an album almost every year in the 1970s, this only happened every three years. There was a stronger influence of pop and rock music, promoted by David Geffen ; the album Dog Eat Dog (1985) was produced by Thomas Dolby at the suggestion of Geffen Records . Mitchell found it difficult to assert her musical ideas against Dolby:

"He may be able to do better, but the fact is, it's not really my music then."

On July 21, 1990 she sang the part "Goodbye Blue Sky" at the live concert The Wall by Roger Waters in Berlin .

Joni Mitchell (with Jörn Weisbrodt) at the Luminato Festival, June 2013

In her later years, Mitchell devoted herself almost entirely to painting .

In 2002 the double album Travelogue was released, inspired by the attacks of September 11, 2001 . It contains a collection of songs from three decades. Joni Mitchell was accompanied during the recordings by a 70-piece orchestra and jazz musicians such as Herbie Hancock and Wayne Shorter . She announced that this was her last album and she was tired of the music industry . She now wants to devote herself fully to painting, which she has not lost sight of in her life.

Contrary to the announcement, Joni Mitchell recorded the album Shine at the beginning of 2007 with almost completely new material, which was released in autumn 2007 and musically means a rapprochement with one's own musical roots.

In April 2010 she made public in an interview that she suffers from Morgellon's disease .

“I am a painter who writes songs. My songs are very visual. The words create scenes - in cafes and bars - in gloomy little rooms - on shores lit by the moon - in kitchens - in hospitals and on fairgrounds. They happen in vehicles - planes and trains and cars. "

In 2014, at the age of 71, Joni Mitchell released a box with four CDs in which she rearranged pieces from 40 years. The collection is called "Love Has Many Faces", subtitle: "A Quartet, A Ballet, Waiting To Be Danced". She is supposed to represent a ballet in four acts that has not yet been performed.

In late March 2015, Joni Mitchell suffered a stroke. In February 2017 she appeared at the annual Clive Davis Pre-Grammy Gala in Los Angeles, accompanied by Cameron Crowe .

As a graphic artist and painter, Joni Mitchell designed the record sleeves for a large part of her albums herself. She has lived in Los Angeles since 1967 . There she bought a small property in the Laurel Canyon district , 8217 Lookout Montain Avenue, with a bungalow-style house and a garden for about $ 40,000 . Her partner Graham Nash , who wrote the song Our House about it , which he released with his band Crosby, Stills and Nash on the album Déjà Vu (1970), also lived there temporarily . Our House is often played at weddings in the USA. The alternative way of life in Laurel Canyon and some of its residents at the time inspired Joni Mitchell to write her album Ladies of the Canyon , which was also released in 1970.

In 1974 she bought a villa with a large garden in the Bel Air district . The house was built in the Spanish style in the 1920s.

In 2002 Prince released a cover version of the song A Case of You on his album One Nite Alone . In addition, the song was released in a slightly different version on the album Piano & A Microphone 1983 in 2018 after the death of the musician. 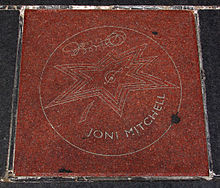