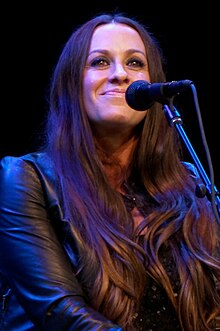 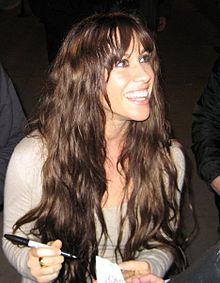 From 1977 to 1981 Morissette lived with her family in Heiligenzell in the Black Forest . Her father, a native of Franco-Ontarian Alan Richard Morissette, and her Hungarian mother Georgia Mary Ann Feuerstein taught children stationed in Germany soldiers in the Canadian military base in Lahr . She has an older brother and a twin brother. In 1981 the family moved back to Ottawa.

In February 2005, Morissette also received US citizenship. From 2002 to 2007, she and Ryan Reynolds were a couple. She was previously in a relationship with actors Dash Mihok and Dave Coulier , from whom she separated in 1993.

When Morissette saw a performance by the folk duo Lindsay and Jacqui Morgan at the age of nine , she was so excited that she wanted to do the same. After she had recorded one of her self-written songs on cassette , Lindsay Morgan, who was friends with her parents, played back music and made it possible for her to sing the song in the studio. Morissette's first acting experience was in 1984 with the Canadian children's program You Can't Do That on Television . The money she earned from the production was invested in her first single, Fate Stay with Me .

Under the name Alanis Nadine, she appeared in the US talent show Star Search around 1990 , but dropped out in the first round. Her first album was released in 1991 under the name Alanis to avoid possible confusion with the Canadian singer Alannah Myles . The first single from it, Too Hot, reached number 14 on the Canadian charts. She was nominated for three categories at the Juno Awards : Single of the Year, Best Dance Record, and Most Promising Female Vocalist; in the latter, she won. Her second album Now Is the Time, which was released by MCA in 1992 , was unable to build on the success of its predecessor.

In 1995, at the age of 21, Morissette released her first international album, Jagged Little Pill , which was very successful. Initially, the album only rose to number 118 on the Billboard 200 charts , but climbed to number 1 with the success of the singles You Oughta Know, Hand in My Pocket, You Learn, Head over Feet and Ironic . The album sold more than 30 million times worldwide, including 16 million times in the USA, three million times in Great Britain and one million times in Canada. Morissette won Album of the Year and Best Rock Album at the 1996 Grammy Awards, Best Female Vocal Performance and Best Rock Song for You Oughta Know .

In 1998 she released the album Supposed Former Infatuation Junkie , which contained the hit singles Thank U and Joining You . The next year was Alanis Morissette - MTV Unplugged . After the death of Nusrat Fateh Ali Khan in 1997, she completed his contribution Mercy on the album The Prayer Cycle by Jonathan Elias . Since it was supposed to sound international, she translated the text together with her grandmother and sang it in Hungarian . In 1998 she also contributed the song Uninvited to the soundtrack of City of Angels , which won two Grammys.

In February 2002, she released her third studio album, Under Rug Swept, with the hits Hands Clean and Precious Illusions . According to her own statements, with the former she tried to process a relationship with a man about 30 years old that she had at the age of 14. While the stanzas reflect the lover's point of view at the time, the refrain includes Morissette's response from the present. In December Feast on Scraps was released , a DVD / CD package containing a concert recording from Rotterdam and eight songs that were not used when recording Under Rug Swept . 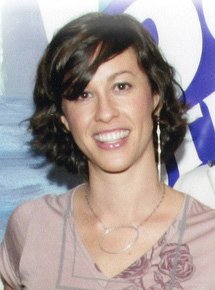 In 2004 her fourth album So-Called Chaos was released, which was strongly influenced by the relationship with Ryan Reynolds, which is particularly evident in the three songs Not All Me, Knees of My Bees and the first single Everything . In 2005 she released the song Wunderkind for the film The Chronicles of Narnia: The King of Narnia , which earned her another nomination at the 2006 Golden Globe Awards for Best Movie Song . In July, Morissette released an acoustic version of the album to mark the tenth anniversary of Jagged Little Pill , which was followed by Best of The Collection in November . The single Crazy is a cover version of Seal 's 90s hit of the same name .

In April 2007, she published a parody of the song My Humps by the Black Eyed Peas on the video portal YouTube . On May 30, 2008, their album Flavors of Entanglement was released , written entirely by Morissette and produced by Guy Sigsworth . It is fundamentally different in style from the previous albums as it goes towards electronic music . This is mainly due to the use of synthesizers . The single Underneath was chosen as the first release , for which two videos were shot. The title Not As We (second release in North America) accompanies the 97 seconds episode from the television series Dr. House and the episode witness protection from the television series Cold Case - No Victim Is Ever Forgotten .

On February 28, 2010, she performed at the closing ceremony of the XXI. Winter Olympics in Vancouver entitled prodigy on. Also in 2010, I Remain was chosen as the theme song for the film Prince of Persia: The Sands of Time . In August 2012 the album Havoc and Bright Lights was released . Large parts of the music video for Guardian (2012) were made in Berlin .

In 1999 she played alongside Matt Damon , Ben Affleck and Alan Rickman in the Kevin Smith film Dogma the role of God , for which Emma Thompson was actually intended; she also participated in the film's soundtrack. She plays the same role in the movie Jay and Silent Bob Strike Back , in which she closes the Jersey Chronicle after the credits and thus indicates the (temporary) end of the New Jersey films . Morissette also appeared on the television series Sex and the City , in which she played a lesbian woman and kissed lead actress Sarah Jessica Parker . In 2003 she made an appearance in the Cole Porter portrait De-Lovely , in which she interpreted his hit Let's Do It (Let's Fall in Love) . In May 2006 she was on stage in a London theater, where she took a guest role in the play The Exonerated (Die Entlastete). She also had a guest role in the 2006 series Nip / Tuck as a friend of Dr. Liz Cruz. In 2009 she played the role of doctor Audra Kitson in the Showtime series Weeds in seven episodes of the fifth season.

Environmental commitment and other activities

Morissette participated with Keanu Reeves in the documentary The Great Warming (2006), which has global warming as a theme. In 2008 she received the Energy Globe Award for her longstanding commitment to the environment. Among other things, she had campaigned against the oil drilling in Alaska . Since January 2016, Morissette has been " Kummerkastentante " for the English daily newspaper The Guardian .