This article describes the director Kevin Smith; for other persons of the same name see Kevin Smith (disambiguation) . 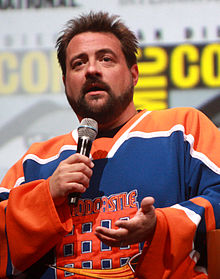 As an actor, he usually appears in his own films in the role of the fictional character Silent Bob . He also played the role of Warlock in Die Hard 4.0 . As a comic book author, he co-wrote series for Green Arrow ( DC ) and Daredevil ( Marvel ), among others .

He is also known for his series of New Jersey films . He often casts the roles in his films with the actors Ben Affleck , Jason Lee , Jason Mewes and Walter Flanagan . Since Mae Day (1992) he has worked with producer and friend Scott Mosier , with whom he also founded the production company View Askew Productions . He also owns Jay and Silent Bob's Secret Stash , a comic and merchandise shop in Red Bank that filmed a few scenes for Jay and Silent Bob Strike Back .

Most of his films are set in his home state of New Jersey. Kevin Smith has been married to Jennifer Schwalbach Smith since 1999 . The two have a daughter named Harley Quinn Smith , named after the Batman character of the same name .