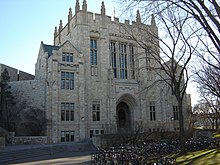 Entrance to the Thorvaldson Building, located on the University of Saskatchewan campus

The University of Saskatchewan offers 58 different degrees and diplomas in over 100 fields of study and is one of the largest in Canada with approximately 19,800 students. The faculties of human and veterinary medicine and the agricultural college are highly regarded. The university is home to the only synchrotron in Canada and is a leader with the research project "The Canadian Lightsource".

The Diefenbaker Canada Center , which deals with the life and work of Prime Minister John Diefenbaker, is located on the university campus .

The university offers Bachelor, Master and Diploma courses in the following departments.

A college building on campus in summer

The campus is located on the southeast bank of the South Saskatchewan River , across from downtown on the northwest bank . Former Prime Minister Sir Wilfrid Laurier laid the first foundation stone for the first building, the College Building, on July 29, 1910. Architects Brown and Vallance were the first architects to begin construction on campus and the first university buildings after Collegiate Gothic -Style designed. The first buildings were kept in a gray shade, which over the years has become a trademark of the historic buildings and the entire campus. The College Building, which was built between 1910 and 1912 and officially opened in 1913, was listed in 2001. The Saskatchewan's Provincial University and Agricultural College was opened on May 1st 1913 by Walter Scott. Many of the buildings are connected by tunnels or skywalks.

Saskatchewan Hall is one of several student residences on campus

There is a monthly campus newspaper, the history of which dates back to 1912. There is also a campus radio (CJUS-FM) operated by students. Its history goes back to 1965. In 1983 the station received a limited commercial broadcasting license. In 1985 broadcasting was stopped due to budget savings. In 2005, CJUS started again with the broadcast of its broadcast program, which continues to this day. The university has a partnership with the local radio station CFCR-FM, which employs volunteers.

The Saskatchewan Huskies compete in the leagues of the Canada West Universities Athletic Association (CWUAA). In recent years the basketball team has achieved regional and national success.