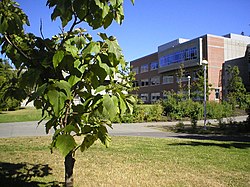 Entrance to the department of the engineering and IT building

Victoria College was affiliated with McGill University in Montreal from 1903 to 1915 and offered courses in the arts and sciences. However, it was administered by the local Victoria School Board . 1903–1908 EB Paul, 1908–1915 SJ Willis took over the management.

According to the plans of the federal government, a state university should be established in each province, a decision that led to the establishment of the University of British Columbia in Vancouver in 1915 . In 1920 Victoria College changed its affiliation from McGill University to the University of British Columbia. The administration remained with the School Board, but the premises of Victoria High School were no longer used, and instead they moved to Craigdarroch Castle , a building built in the 1890s by coal tycoon Robert Dunsmuir . The facility was directed by EB Paul and PH Elliott. The focus of the training was on medicine, law and theology.

Under the direction of JM Ewing and WH Hickman, the facility was gradually converted into a full university (1945–63). The Victoria College Council represented the University of British Columbia. The Department of Education and the Greater Victoria School Board also promoted this development.

In 1946 the Craigdarroch Institute moved to the Lansdowne campus, now the campus of Camosun College, founded in 1971 . The Provincial Normal School there was integrated into Victoria College as an educational faculty in 1956. With the help of the Department of War and the Hudson's Bay Company , 110 hectares of land at Gordon Head was acquired and converted into campus. In 1961 the first bachelor's degree was achieved.

A separate law, the University Act of 1963, created the legal requirements for the replacement of the provincial university. In accordance with the general principles of Canadian universities, a chancellor was elected, as well as a board of governors. This appointed the president. The Senate in turn represented the faculties and the general assembly of the university.

Today the campus covers around 160 hectares. The departments for geology and oceanography , chemistry , climatology and astronomy (Bob Wright Center), biologists (Cunningham), doctors (Medical Sciences Building), microbiology and biochemistry (Petch Building ) are located in its own buildings ), Geography , Political Science and Mathematics (Social Sciences and Mathematics). In addition, there are the engineering sciences (Engineering Buildings) and the economics (Business and Economics Building), as well as the humanities (Clearihue), anthropologists , psychologists and sociologists (Cornett) and legal scholars (Fraser), finally education and music (MacLaurin) as well as an own first Peoples House for the research and representation of the indigenous people of Canada, i.e. the Inuit , First Nations ( Indians ) and the Métis .

In addition, there are student dormitories for around 3,200 students, a theater, a cinema and various research initiatives such as the Center for Asia-Pacific Initiatives (CAPI), the Center on Aging ( Gerontology ), the Center for the Study of Religion in Society , which deals with the role of religion in society, or the Center for Global Studies . Most of them are based in Sedgewick. In the north of the campus there are also army shelters that were built in 1940 and are under monument protection.

Since the campus was built on the grounds of Finnerty Gardens and Mystic Vale , i.e. on heavily forested, natural terrain, white-tailed deer , owls and numerous rodents are frequent visitors, and rarely also pumas .