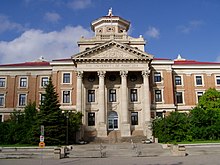 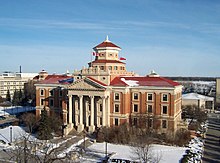 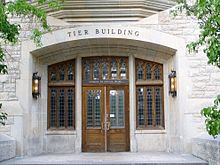 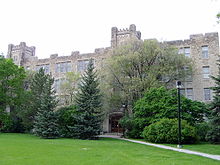 The University of Manitoba ( UM ) was founded in 1877 by the three colleges St. Boniface College , St. John's College and Manitoba College in order to be able to award university degrees to the students there. The UM was the first university to be established in Western Canada . She is a member of the University of the Arctic .

The Manitoba Parliament in 1900 amended the University Act to allow UM independence. In 1904 the first teaching building was erected in the city of Winnipeg . UM started with six professors, all of them from the field of science .

After further study programs and teaching buildings were added, the UM changed its permanent seat to Fort Garry in 1929 .

Since its inception, UM has incorporated a number of colleges into its cooperative and content-based corporation. Manitoba Medical College was admitted in 1882, followed by:

The two schools, the Canadian Mennonite Bible College in Tuxedo , and the Canadian Nazarene College in Fort Garry, were recognized as recognized universities by the UM. In 1967 the state government of Manitoba gave the UM schools the status of "University".

The first was United College ( created from a merger of the two schools Wesley College and Manitoba College ), which became the University of Winnipeg . Second, Brandon College became Brandon University .

St. Boniface College and St. John's College, both founding schools of the university, are still members of the UM.

St. Boniface College, a Roman Catholic institution whose roots date back to 1818, is the UM cooperative's only French-speaking school. It offers courses that are either held in French or courses for teaching staff who later want to give their own courses in French.

St. John's College, whose history dates back to 1820, has emphasized the arts and sciences. In addition to other special studies, it prepares students for the priesthood of the Anglican Church .

There are the following colleges:

There are 22 departments in which bachelor, master and doctoral degrees can be achieved:

33 of the buildings on the UM campus of Fort Garry are mainly used as teaching buildings.

Four of these houses the following schools

The remaining buildings are used for laboratories, offices, dormitories and administrative offices.

The second university campus includes a complex of nine buildings in the center of Winnipeg. They house the university's medical and dental departments.