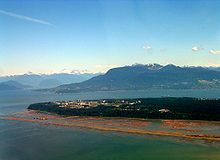 The lobby of the UBC Life Sciences Center, opened in 2004

The university has the following departments:

The university also has the following colleges:

View of the northern part of the UBC's Point Gray campus

Postgraduate courses (PhD, MA / MSc) are administered at the University of British Columbia by the Faculty of Graduate Studies (Vancouver) or the College of Graduate Studies (Okanagan) in cooperation with the individual faculties and programs. What is special about the UBC is that, in research-based programs, no distinction is made between the level of tuition fees for international and Canadian students, as is otherwise common worldwide. Instead, the tuition fees are relatively affordable compared to other Anglo-American / Commonwealth countries.