Overview of the Burnaby campus

The Simon Fraser University (SFU) is located in the city of Burnaby in the Canadian province of British Columbia . The main campus is on Burnaby Mountain. It was founded in 1965. Tamwood camps are held there every summer, where young people from all over the world can improve their English skills and take part in a wide range of activities. The university has three campuses in Burnaby, Surrey and Vancouver . The university is named after the fur trader and explorer Simon Fraser . The university took first place in MacLeans Magazine's university ranking in 2009 and 2010. 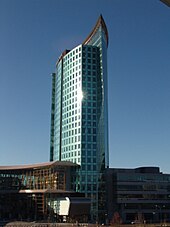 Buildings on the SFU Surrey campus

It was the first Canadian university to join the National Collegiate Athletic Association .

The Burnaby campus has already been used as a filming location for various television series such as Stargate and Andromeda .