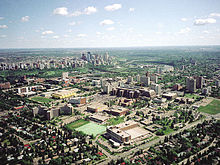 The building for the natural sciences department.

The University of Alberta ( U of A ) is a university in Alberta ( Canada ).

Founded in 1908 by the provincial government led by Alexander Cameron Rutherford , the college is located in Edmonton , the capital of Alberta, and is one of the leading universities in Canada. She is still a member of the University of the Arctic . The university campus is located in central Edmonton, on the south bank of the North Saskatchewan River . Since 2004, Augustana College in Camrose , 90 km southeast of Edmonton, has been part of it.

In 2006 370 courses were offered. The current number of students enrolled is 38,311, spread across 18 faculties. Outside research funding was over $ 415 million Canadian .

The university has several campus facilities that are spread over several locations.

The North Campus (Main Campus) is the largest campus that is considered the main campus of the university. This is where the university management, lecture halls, research centers and various facilities such as libraries, sports facilities, fitness studios, restaurants and student dormitories are located. The campus is located on the southern banks of the North Saskatchewan River and has 145 buildings on an area of ​​around 92 hectares.

The Saint-Jean campus is a campus located 3 miles east of the North Campus in Bonnie Doon and where French is spoken outside of Quebec. Due to the increasing number of students, the campus is being expanded significantly. New laboratories and lecture halls are being built. The students on the campus usually study a bachelor's degree, including students of the artistic and social degree programs, engineers who study for the first year at the location, then continue their studies on the main campus. There are also bilingual courses in nursing and economics.

The Enterprise Square campus opened on January 15, 2008. This is located on the North Saskatchewan River in downtown Edmonton. The university facilities are located in historic buildings of an old Hudson's Bay Company building. The buildings have been completely renovated. The Faculty of Extension, Alberta Business Family Institute, Alberta School of Business and a design gallery are located on campus.

The campus is located two kilometers south of the main campus and is directly connected to the local public transport system Light Rail Transit . 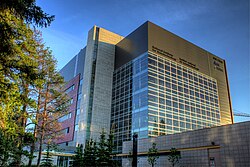 The National Institute for Nanotechnology

The main research areas are: