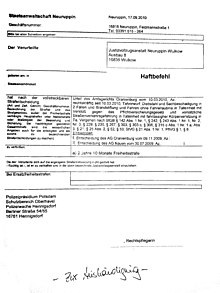 Enforcement arrest warrant from the Neuruppin Public Prosecutor's Office from 2010

An arrest warrant is the - usually written - order from a state organ (usually a court ) to arrest a person .

According to Article 2, Paragraph 2, Clause 3 of the German Basic Law, human freedom may only be encroached upon on the basis of a law. Article 104 of the Basic Law stipulates that the judge must order deprivation of liberty for more than one day .

Arrest warrants can serve to prevent a person from the imminent commission of a criminal offense through police custody or to ensure the proper conduct of criminal , civil or administrative proceedings as well as the special procedures under the tax code , the tax court code or the social court law .

There are several types of arrest warrant in criminal proceedings, although an arrest warrant for a temporary arrest can also be dispensed with. Examples of this can be found in Section 127 of the Code of Criminal Procedure .

The most important in practice arrest warrant is the investigation warrant , whose requirements in §§ 112 et seq. Code of Criminal Procedure are regulated.

According to this, the arrest of the accused can be ordered even before the main proceedings are concluded, under certain conditions . The accused must urgently be suspected of a crime , and there must be a reason for detention.

Finally, an arrest warrant must not be disproportionate, i.e. it must be in proportion to the expected legal consequences. In the case of certain serious criminal offenses ( murder , manslaughter ), the law ( Section 112 (3) StPO ) allows pre-trial detention to be ordered (so-called absolute grounds for detention) even without one of the aforementioned reasons for detention.

However, the Federal Constitutional Court decided that this provision should be interpreted in such a way that one of the aforementioned reasons for imprisonment - usually the risk of flight - is to be examined, although there is a presumption that it exists. If the presumption can be refuted, no remand detention may be ordered for these offenses either.

In principle, pre-trial detention may not last longer than six months before the main hearing . It may only last longer under very specific (narrow) conditions ( Section 121 of the Code of Criminal Procedure). Here About definitely has the relevant competent Higher Regional Court to decide.

The written arrest warrant, which requires an application from the public prosecutor's office in the preliminary investigation and which can also be issued by the court after the indictment has been filed, has the name of the accused , the criminal offense of which he is urgently suspected, the reason for arrest and, in the case of juvenile and adolescent offenders, statements on proportionality to contain pre-trial detention. An already issued arrest warrant is to be made known to the accused upon arrest . He must then be brought before the judge who will decide whether the conditions for issuing the arrest warrant are still met. If the accused is arrested before an arrest warrant has been issued, he must be brought before the competent judge, who then examines the requirements for the issue. If he comes to the conclusion that the suspicion is urgent and at least one of the reasons for detention listed above exists, he issues an arrest warrant and then announces it to the accused.

The arrest warrant can be revoked or suspended during the detention review ( Section 117 (1) StPO). Certain conditions can be imposed on the accused, for example to report regularly to the police, to deposit a certain security deposit or to avoid contact with certain persons such as co-accused or witnesses ( § 116 , § 116a StPO).

Temporary placement in accordance with section 126a of the Code of Criminal Procedure (placement order) in a psychiatric hospital or a rehab facility can be ordered if someone is incapable of guilt or is of reduced culpability and therefore criminal proceedings against him are likely to end with the ordering of a measure of reform and security. A further requirement is that public safety is endangered and that the person can be expected to commit significant further criminal offenses. In principle, the same rules apply as for pre-trial detention.

Arrest warrant in the main hearing

If a defendant fails to attend the main hearing (without excuse), the judge can issue an arrest warrant ( Section 230 StPO) if he does not decide to have the defendant brought before the next hearing. The arrest warrant is only used to secure, continue and terminate the criminal proceedings, which is why it can also be issued against a defendant who is incapable of guilt.

If a defendant to a term of imprisonment that the probation was sentenced has been exposed and there are grounds to believe that the probation is revoked, a security arrest warrant may be issued (against him § 453c StPO), if it is volatile, for example. This is to ensure that the sentence imposed on him can also be carried out. Furthermore, a defendant who did not appear at the main hearing without excuse can be issued with a security arrest warrant to conduct the main hearing in accordance with Section 230 of the Code of Criminal Procedure.

If someone does not present himself in spite of being summoned to enforce a prison sentence imposed on him, or if he evades enforcement (for example if the convicted person has no permanent address, is on the run, for example from a prison , and is in hiding), an enforcement warrant can be issued against him endure. This is the only arrest warrant issued not by the judge but by the public prosecutor , in this case the senior judicial officer . The reason is that in this case a court has already decided on the imposition of imprisonment and this is only about the enforcement of the court decision. Likewise, the issue of an enforcement arrest warrant is permissible if a convicted person does not settle a fine imposed on him by payment or community service (also: free work) and does not comply with the subsequent summons to begin the substitute custodial sentence .

A European arrest warrant is a sub-case and actually not an “arrest warrant” either, but a search item. It facilitates and enables the extradition of criminals within the European Union . If the judiciary of another EU country wants to seize a suspect with this arrest warrant, the German police and judicial authorities have to help find and arrest him.

This article or section needs to be revised: see note below, which was added on December 31, 2012.
Please help to improve it , and then remove this flag.

Here there is an arrest warrant to force the submission of an affidavit (formerly an oath of disclosure ) to a bailiff ( § 802g ZPO ). In fact, the vast majority of arrest warrants in Germany are those to force the submission of an affidavit. The obligee can apply for both in the event (also in advance) that the enforcement of a title (e.g. a judgment, an enforcement order or a settlement) is unsuccessful and the debtor of a summons at a date for the submission of the asset information has not followed through, has given insufficient information or has refused to submit. The prerequisite for the obligation to submit the asset information is not only the unsuccessful foreclosure according to § 807 ZPO , but also as an isolated application acc. § 802 c ZPO possible; and the groundlessness of the refusal ( § 802g ZPO, § 185b Abs. 3 GVGA).

The amount to be enforced (even only a partial amount) is to be given to the bailiff by the obligee in the formal order in accordance with To notify GVFV. However, this is not yet a sufficient reason to refuse to enforce or submit an EV.

The wrongly enforced person has the option of an enforcement defense action , which, if the arguments are credible, leads to the provisional suspension of enforcement and revocation of the arrest warrant that has already been issued. Nevertheless, the person concerned - even if the entry was wrongly made - can still expect contract refusals for months, as the debtor directory is taken over by numerous information services and is only updated at certain time intervals.

In fact, arrest warrants to compel the reporting of assets are seldom carried out by imprisoning the debtor. Rather, the creditor can instruct the bailiff to provide so-called third-party information in accordance with Section 802 l ZPO for third parties such as B. to obtain pension providers, the Federal Central Tax Office and the Federal Motor Transport Authority. These orders are often more promising, as they allow insight into employment relationships, account data and owner information regarding vehicles. If the debtor again fails to comply with a request to provide the financial information in the arrest procedure, the bailiff can arrest him at any location - possibly with the help of police auxiliaries - and take him to a detention center, provided that the debtor does not provide the financial information beforehand or makes payment of the claim to be recovered. In practice, the bailiff's threat of arrest is usually sufficient to induce the debtor (usually directly in his home) to submit the financial report to the bailiff. The arrest warrant to force the submission of the asset information will continue to be entered in the debtor register kept by the court of residence .

Notes in the SCHUFA are already made with the data in the official enforcement portal (www.vollstreckungsportal.de) as soon as in the registration order procedure in accordance with § 882 c ZPO is issued and thus even before a possible arrest warrant is issued by the competent court of residence.

According to Section 62 of the Residence Act , the judge can issue a so-called deportation detention order to enforce the deportation . The procedure is based on §§ 415ff. FamFG and takes place at the local courts .