The group consists of DJ Muggs , rappers B-Real and Sen Dog and, since 1994, percussionist Bobo , who previously worked for the Beastie Boys . They became known internationally primarily for their commitment to the legalization of cannabis use . The name "Cypress Hill" ( German : Zypressenhügel ) refers to the place of residence of the founding members, as almost all of them grew up on Cypress Avenue in South Gate . Except for DJ Muggs, all members are Hispanic .

The original band members are originally from South Gate , California , except for DJ Muggs, who moved here at the age of 17. They had their first appearances as a rap quartet DVX (Devastating Vocal Xcellence) consisting of Mellow Man Ace, Sen Dog, DJ Muggs and B-Real, in front of a Latino audience in Southern California. When Mellow Man Ace embarked on a solo career with Capitol Records, the remaining three formed Cypress Hill .

In 1991 they signed a contract with Ruffhouse Records and so came to the distribution of the major label Columbia Records . With their debut album Cypress Hill , which was released in the same year, they won a large fan base despite their rather non-mainstream and chart-oriented music. The tracks on the album were played on college radio and metropolitan radio stations in particular, so that the record sold almost two million times. DJ Muggs meanwhile produced tracks together with House of Pain , the Beastie Boys and Funkdoobiest .

Two years later the international breakthrough came with the next record, Black Sunday . It rose to number 1 in the US charts and was triple platinum in the US alone. The single Insane in the Brain became a worldwide hit that appealed not only to the typical hip-hop audience. The following years were the most successful of the band. She headlined the Lollapalooza Festival twice . This is taken up in an episode of The Simpsons . 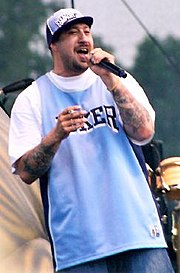 In 1994 they played at the Woodstock II Festival and had numerous joint projects with non-hip-hop bands, such as: B. Pearl Jam and Sonic Youth , with whom the song I Love You Mary Jane was released on the Judgment Night soundtrack. Rage Against the Machine covered their song How I Could Just Kill a Man , which they then played together on their final Renegades tour in the Grand Olympic Auditorium . After the release of their next album III: Temples of Boom , the band members focused more on solo projects. DJ Muggs released the LP Muggs Presents ... the Soul Assassins , including features by Dr. Dre , KRS-One , Wyclef Jean and Mobb Deep . B-Real made guest appearances on the Space Jam soundtrack and on Dr. Dres Aftermath album. He also worked as a rapper and producer on the album of the group Psycho Realm . In 1998 the next joint album IV was released , which again brought in a gold record and the hit single Tequila Sunrise and the well-received marijuana tribute Dr. Greenthumb included.

They later published some of their songs completely translated into Spanish on the album Los Grandes Éxitos en Español . Two albums later, they made a short appearance in So High in 2002, starring Method Man and Redman . They also played a key role in the film's soundtrack.

In 2004 the band continued their experiments and collaboration with rock musicians and began experimenting with reggae . On the album Till Death Do Us Part , released in March, they played with Tim Armstrong ( Rancid ), Rob Aston ( The Transplants ) and Damian Marley , the son of Bob Marley . The first single What's Your Number is based on the song Guns of Brixton by The Clash and led to chart success in the rock charts.

In the meantime, the end of the crew was announced as Cypress Hill. The members wanted to concentrate more on their solo projects, but continue to tour together. In the meantime, those rumors of separation have been eliminated by working on a new studio album, which is to be produced not only by DJ Muggs, but also by DJ Premier . The group also continues to appear together with guest posts on albums by other artists.

In 2007, Cypress Hill teamed up with rap and crossover band Kottonmouth Kings and Potluck to form a hip-hop supergroup called Kannabis Kartel . A joint album has already been completed. It will be released through Suburban Noize Records .

In October 2008, the group was honored as one of five winners at the annual VH1 Hip Hop Honors show alongside rap pioneers De La Soul , Too Short , Naughty by Nature and Slick Rick .

In 2009 they were guest vocalists with Fergie on the B-side of the slash single Sahara, on which they re-recorded the song Paradise City .

In 2010 they played some songs on their eighth studio album Rise Up together with rock musicians such as Daron Malakian , Tom Morello and Mike Shinoda .