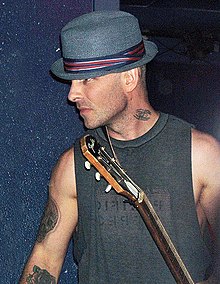 Armstrong played in the punk and ska band Operation Ivy and two other bands before forming Rancid . Armstrong owns his own music label , Hellcat Records , and plays with Travis Barker and Rob Aston on The Transplants . Armstrong is also a songwriter , writing songs for Pink and Gwen Stefani . Characteristic of Armstrong's guitar playing are guitars from the Gretsch brand . He created his own country club guitar for Gretsch, which is available in stores. Armstrong made an appearance on the sci-fi series X-Files in 2016 .

While Armstrong was more of a guitarist at the beginning of his musical career, this changed when he founded Rancid in 1991, when he took up the position of front man for the first time. He also began to write a large part of the lyrics completely himself, which he had not yet done in the expanded form for Operation Ivy, for example. Brett Reed , the first rancid drummer, stated that this was going so far that even the band members often did not know what the songs were actually about. This is due to the fact that Armstrong's writing style is sometimes very metaphorical. The early Rancid publications in particular are dealing with personal issues such as Armstrong's short-term homelessness, alcohol and drug abuse and life on the street.

Tim Armstrong has a special relationship with Matt Freeman and Lars Frederiksen . Aside from being bandmates, he calls them his best friends and emphasizes that friendship as such is more important than the band. According to Armstrong, Freeman saved his life in 1989-91 as he cared about his friend when he had severe drug and alcohol problems and slipped into homelessness. Freeman himself states that he only proposed the creation of Rancid to give Armstrong a perspective beyond drugs. Today Armstrong is considered abstinent and is the godfather of Freeman's first son.

Between 1997 and 2003 he was married to Brody Dalle , the then singer of the bands Distillers and Spinnerette , whom he met in Australia in 1995 when she was only 16. They got married when she was 18 and he arranged for her to move to the United States. The separation met with great interest from the media, as Brody, who at the time still had the surname of her husband, Armstrong, announced the end of the marriage in the Rolling Stone by being photographed kissing with Josh Homme. According to his own admission, Armstrong's divorce came as a surprise. He processed this on the Rancid album Indestructible . The songs Tropical London and Fall Back Down are dedicated to her. In the lyrics he accuses his ex-wife of fraud and betrayal in quite clear language, but revised this on his solo album A Poet's Life , which was released in 2007 , on which it says, among other things, "Life goes on / No, I don't hate her" . His ex-wife later gave up her married name and called herself "Dalle", after the actress Béatrice Dalle . Aside from marriage, Armstrong kept and keeps his private life under lock and key.

Armstrong has numerous tattoos. Most noticeable is a large skull tattoo in the form of a spider web. The musician's clothing style is strongly based on the classic punk fashion of the mid-80s. These include leather jackets with rivets, Levi's vests and tight-fitting jeans . Armstrong has had a full beard since the mid-2010s.

In addition to music, Armstrong mainly devotes himself to photography and painting. The artwork of the second Lars Frederiksen and the Bastards LP, for example, is one of these works.

In 2006 he released his solo album A Poets Life with the songs:

A special feature is that there is a separate video for each song. Armstrong did not plan a regular release of these songs. All they should do is shorten the fan waiting time for the next Rancid album. However, after the songs met with a great response and especially the song Into Action was a great success, Armstrong decided to put together a regular album from the songs. The CD was released by Hellcat Records .

Since the mid-1990s, Armstrong has also occasionally appeared as a music producer. In addition to various punk rock albums (including the debut album by AFI (band) ), he also produces artists from other genres and was, for example, producer and co-author of numerous songs on the album Try This by Pink (musician) . The 2012 published and produced by Armstrong Album Rebirth of Jimmy Cliff was awarded a Grammy for Best reggae album.

Tim Armstrong also produces a web series called tim timebomb's ROCKNROLL THEATER . The first episode is about the rise and fall of the young entrepreneur Dante (played by Lars Frederiksen), accompanied by songs from the punk, reggae and ska spectrum. With the purchase of the first episode, the buyer purchases a "second solo album" (Tim Armstrong on rancidrancid.com) by Tim Armstrong with 14 new songs from the first and upcoming episodes of ROCKNROLL THEATER. In addition, since 2012 Armstrong has been publishing new interpretations of his own songs under the pseudonym Tim Timebomb and Friends at regular intervals, as well as cover versions of songs that he liked or that shaped his work. So far, Social Distortion , The Who and Bob Dylan have been covered . Various guest musicians have supported Armstrong with the recordings so far, including Travis Barker , with whom he often works apart from the joint group Transplants. In 2012 Armstrong also worked with Barker and rapper Yelawolf for their Collabo EP. Armstrong appeared on this project both as a guest musician and as a video producer. In 2016 Armstrong directed the music video for Green Day's single Bang Bang , in which he also made a small cameo. He has been friends with Green Day since the early days of Operation Ivy and Green Day in the Oakland punk scene of the late 1980s.