Green Day [ gɹiːn deɪ ] is an American punk rock band that started the punk revival in the early 1990s. Their third studio album Dookie , released in 1994, brought the band the international breakthrough and sold more than 10 million copies in the US alone. The albums American Idiot (2004) and 21st Century Breakdown (2009) also reached high chart positions worldwide. In total, they have sold around 75 million records (as of 2014).

In 1987, school friends Billie Joe Armstrong and Mike Dirnt, then 15, founded the punk band Sweet Children. Later the drummer Al Sobrante joined them, who, thanks to his experience with his previous band Isocracy, organized performances for Sweet Children. This is how Sweet Children first gained popularity in the punk scene in Berkeley , California. When the band played a concert with The Lookouts, their founder Larry Livermore was enthusiastic and brought the band to his label Lookout! Records . Before the EP 1,000 Hours was released there in 1989 , the band was renamed Green Day. The name is derived from a Californian slang term for a day ( day ) full of boredom, which one tries to kill by smoking marijuana ( green , German grass ). In 1990 the album 39 / Smooth and the EP Slappy followed . These three releases were combined in 1991 in the compilation 1,039 / Smoothed Out Slappy Hours .

Al Sobrante left the band in 1990 to devote himself to college and his daughter, he was succeeded by Tré Cool , who was already the drummer for the Lookouts.

In 1992 Green Day released their second album Kerplunk! , which also includes four songs from the Sweet Children era as bonus tracks. In the song Dominated Love Slave , written by Tré Cool, Tré Cool plays guitar and Billie Joe Armstrong plays drums. The album was a huge success in independent circles. This made the major label Warner aware of the group, and its sub-label Reprise Records signed Green Day.

In 1994 her third album Dookie was released . It made a decisive contribution to heralding the punk revival and pushing it into the mainstream . The album was very successful worldwide, selling over eleven million copies and achieving diamond status in the United States. The released singles Basket Case and When I Come Around were very successful. Other singles are Welcome to Paradise , Longview and She . The Longview video was shot in Armstrong and Dirnt's old apartment. With Dookie up to started American Idiot ongoing (2004) collaboration of the band with producer Rob Cavallo .

In 1995 the band was nominated three times for a Grammy , but ultimately won “only” one for “ Best Alternative Music Album ”. In addition, the video for Basket Case was nominated for nine MTV Video Music Awards , including "Video of the Year". In the same year the band also performed at the Woodstock II festival . 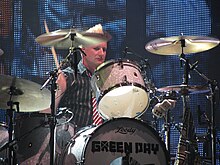 The follow-up album Insomniac , which was released in 1995, sold relatively well due to the band's popularity and achieved double platinum status in the USA, but could not build on the success of Dookie . Single releases were Stuck with Me , Geek Stink Breath , Brain Stew / Jaded and Walking Contradiction . The video for Walking Contradiction earned the band a nomination at the MTV Video Music Awards for "Best Special Effects" and a Grammy.

Their fifth album, Nimrod , which was released in 1997, also achieved double platinum status. The album is stylistically diverse, including an acoustic guitar. The singles Redundant , Hitchin 'a Ride , Nice Guys Finish Last and Good Riddance (Time of Your Life) were released. Good Riddance (Time of Your Life) , a guitar ballad, is still played today at weddings and funerals in America. The video for the single won an MTV Video Music Award for " Best Alternative Video ".

In 2000 Warning appeared , with which the band changed their style. So she turned away from punk and towards rock . Single releases were Minority , Warning , Waiting and Macy's Day Parade . At the 2001 California Music Awards, Green Day won all eight categories in which they were nominated.

After Warning there was a break at Green Day, as none of the band members were satisfied with the performance of the others. Armstrong developed writer's block due to the fear that Dirnt and Cool would only criticize and reject his songs, while the other two did not feel recognized as equal members of the band. In order to avert the threatened breakup of the band, they faced a therapy in which they mutually revealed their fears and feelings. "Realizing we were there for each other was a big deal," said Cool. The band got back together and started working on new material.

In the meantime, a best-of album ( International Superhits ! , 2001) and a B-side compilation ( Shenanigans , 2002) have been released. Where Shenanigans for a Grammy for Espionage was nominated.

After Green Day had already recorded 20 songs under the working title Cigarettes and Valentines , the master tapes were stolen from the studio. Instead of re-recording the album, the band decided to start all over again. Armstrong later described the incident as "lucky in bad luck" because the material was good, but not "Maximum Green Day". The result of the new beginning, American Idiot , went straight from zero to one in the US album charts in 2004 and became a great international success. American Idiot is a rock opera (similar to The Whos Quadrophenia ) whose story was adapted as a musical and premiered on September 15, 2009 at the Berkeley Repertory Theater . Single releases were American Idiot , Holiday , Boulevard of Broken Dreams , Wake Me Up When September Ends and Jesus of Suburbia .

Green Day were nominated in eight categories at the 2005 MTV Video Music Awards and ultimately won seven of the awards, including the Video of the Year Award, Best Male Music Star Video, and Best Rock Video. On February 5, 2005, Green Day appeared at the MTV Europe Music Awards 2005, where they immediately won two awards for the best album and for the best rock band.

In the categories "Best Live Band" and "Best Band on the Planet", the readers of Kerrang and Kerrang.com voted Green Day first.

In 2005 Green Day released their second DVD after International Supervideos , Bullet in a Bible . It shows the biggest concert that Green Day have ever played. It took place on two consecutive days in Milton Keynes , Great Britain in front of a total of 130,000 spectators. The DVD also shows insights into touring life as well as some interview parts. The complete live material is also included as an audio CD.

It took Green Day five years to present a follow-up album to American Idiot , the 21st Century Breakdown . The album was released on May 15, 2009 and contained 18 songs divided into three acts: Act I: Heroes and Cons , Act II: Charlatans and Saints, and Act III: Horseshoes and Handgrenades . In Germany, the album landed at number one in the German album charts in the first week. Know Your Enemy , 21 Guns , 21st Century Breakdown and Last of the American Girls were released as singles in Germany.

The video for 21 Guns was named "Best Rock Video", "Best Direction in a Video" and "Best Cinematography in a Video" at the MTV Video Music Awards 2009 . At the MTV Europe Music Awards 2009 , where Green Day also appeared, they won the award for "Best Rock Act". They also received the American Music Award for Favorite Alternative Rock Artist in 2009 and were awarded a Grammy in the Best Rock Album category at the 2010 Grammy Awards for the album 21st Century Breakdown . The band played their song 21 Guns at the awards ceremony together with the cast of the Broadway musical American Idiot .

From July 2009 to October 2010 Green Day were on the 21st Century Breakdown World Tour and gave over 130 concerts. From the two appearances in the Saitama Super Arena in the Japanese city ​​of Saitama on January 23 and 24, 2010 the live DVD / Blu-ray Awesome as Fuck emerged, which was released in Germany on March 18, 2011. The CD accompanying the DVD contains recordings of various concerts on the world tour.

On June 10, 2010, the console game Green Day: Rock Band by Electronic Arts was released for three different consoles. The player has the opportunity to play through the three albums Dookie , American Idiot and 21st Century Breakdown , with the latter requiring some game content to be downloaded to complete. The band members are included as playable characters.

Universal Studios and Playtone , Tom Hanks ' production company , secured the rights to a film adaptation of the American Idiot musical . In October 2016, it was announced that HBO was working on the film with Playtone. Michael Mayer, the director of the musical will also direct the film. Dustin Lance Black wrote the script . Billie Joe Armstrong is said to play the leading role.

On August 11, 2011, Green Day played 16 new songs at the Tiki Bar in Costa Mesa , California . It remained unclear whether these already belong to a new album.

In February 2012, Green Day started working on their ninth studio album. Two months later, the band announced that they would release an album trilogy consisting of the albums Uno , Dos and Tré instead of a single album . After 21st Century Breakdown was produced together with Butch Vig , Green Day engaged Rob Cavallo again for the new albums, with whom they had worked since Dookie (1994). The albums received mixed reviews. This was followed by the 99 Revolutions Tour in Europe and North America .

On April 19, 2014, Green Day released the album Demolicious . The compilation contains demo recordings of songs from the albums Uno , Dos and Tré as well as an acoustic version of the song Stay the Night and the previously unreleased song State of Shock.

After more than a year, Green Day played another concert on April 16, 2015. On April 18, Green Day was inducted into the Rock and Roll Hall of Fame . At the end of 2014 it was announced that Jason White was suffering from almond cancer .

On December 24, 2015, Green Day released the song Xmas Time of the Year. Then they announced that they were working on a new album.

On January 18, 2016, Billie Joe Armstrong posted a picture with a microphone on his Instagram account. Many fans were expecting a new album as a result.

In early September 2016, Green Day announced that the Revolution Radio Tour was planned. Green Day takes place in North America, Europe, Australia and New Zealand. They also play in some festivals, such as Nova Rock 2017 .

The album Father of all ... , which contains ten songs and has a playing time of 26:16 minutes, was released on February 7, 2020 . Drummer Tré Cool called the album a "fun record". With Graffitia and Father Of All Motherfuckers , however, according to singer Billie Joe Armstrong, it also contains two political songs.

In 2006, Green Day and U2 started the Skids Cover The Saints Are Coming as an aid project after Hurricane Katrina . The single reached number six in the German charts. The song was also released on the U218 Singles compilation .

For the 2007 compilation Instant Karma: The Amnesty International Campaign to Save Darfur , on which various bands and musicians interpreted songs by John Lennon , Green Day contributed the title Working Class Hero .

Green Day had a guest appearance in The Simpsons - The Movie (2007), where they interpret the Simpsons cover theme by Danny Elfman .

Since December 2007 the members of the band appear together with Jason Freese , Jason White and Kevin Preston as Foxboro Hot Tubs , which are based on the garage rock of the 1960s. In April 2008 the album Stop Drop and Roll was released !!! followed by a short tour.

In 2012, Green Day was the subject of a specially adapted variant of the popular game Angry Birds .