Pop-punk , sometimes also punk-pop , describes a popular, but less harsh form of punk rock with elements of pop music . The genre became known in the mid-1990s through the success of the bands Green Day and The Offspring .

The exact definition of pop punk is controversial. This article deals with the style of punk that became popular in the mid-1990s with elements of pop music .

The term is also used disparagingly for the socially acceptable and commercially successful variant of punk music, which is musically similar to it, but is generally not accepted as authentic by many punks because of its rather "fun-oriented", commercial orientation and occasionally political unambitiousness.

The term is also used in connection with older punk bands such as the Ramones , The Jam and The Undertones .

In addition, the commercial orientation of melodic hardcore in the USA and Europe is also referred to as pop-punk. 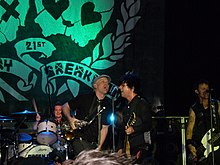 Pioneers of the genre: Green Day

The main pioneers of pop-punk include punk bands of the 80s and early 90s who played an increasingly melodic and pop-oriented variant of punk rock, particularly Bad Religion , NOFX and No Use For A Name .

The first big wave of pop-punk bands began in California in the mid-1990s. This was mainly led by the band Green Day , which released their album Dookie in 1994 , and The Offspring , which released Smash in the same year . Both albums are among the most successful and important albums in the genre today. Weezer is often mentioned as one of the pioneering pop-punk bands, although they are often also classified as alternative rock or power pop . The Offspring didn't release another album that sold so well after Smash . With their 1998 album Americana , the group came close to this success. Green Day released Insomniac in 1995 , which has a darker sound than the more melodic previous album Dookie , and was less successful. Her next two albums, Nimrod (1997) and Warning (2000), were not as successful as Dookie . 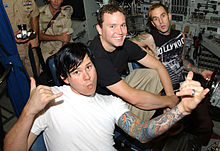 Pioneer of the second wave: blink-182

In 1999 Blink-182 released the album Enema of the State , with which they became known worldwide. Later, the band, along with Green Day and The Offspring, would be among the most successful representatives of pop punk. Blink-182 started a second wave of pop punk. Its most successful representatives include Sum 41 , Good Charlotte , Simple Plan , New Found Glory , Zebrahead , SR-71 , Smash Mouth , American Hi-Fi, and Bowling for Soup , all of which had great success in the early 2000s . Still, Blink-182, Green Day and The Offspring remained the most successful bands in the genre. In the early 2000s, numerous bands appeared that combined elements of pop-punk with other genres such as alternative rock , crossover , nu metal , grunge and emo , such as A , Billy Talent , Hoobastank , Incubus and Lostprophets .

Even if North American and in particular Californian bands still dominated the scene, bands from other parts of the world increasingly established themselves in the genre, such as the Donots from Germany, The Killer Barbies from Spain or Sommerset from New Zealand.

In the mid-2000s there was a renewed wave of new pop-punk bands such as Fall Out Boy , All Time Low and Paramore , among other things due to the successful comeback of Green Day with American Idiot at the end of 2004 . However, these moved more and more away from the original punk rock and were more oriented towards alternative rock and emo . But older bands in the genre were also still successful, with Green Day's album 21st Century Breakdown at number 1 in the German charts, and Days Go By by The Offspring , Sum 41s Screaming Bloody Murder or Neighborhoods by Blink-182 were also successful in the charts .

In the 2010s , pop-punk's (commercial) popularity declined. At the same time, a new generation of bands was able to establish themselves from the early 2010s, but they moved further and further away from the pop-punk of the 1990s and early 2000s and were instead more influenced by post- and melodic hardcore and emo. Well-known representatives are The Story So Far , State Champs , Knuckle Puck , Trash Boat , Neck Deep , 5 Seconds of Summer and As It Is .