The beginning of the decade lies in the glow of the worsening sovereign debt crisis in the euro area . Countries like Greece, Spain and Italy have to struggle with severe budget deficits and the resulting high unemployment. With the help of so-called rescue packages , these member states are to be saved from insolvency. For this reason, the heads of state and government of the common currency zone decided in December 2011 on the European Stability Mechanism (ESM), which is supposed to guarantee emergency loans and guarantees to the states concerned.

The decade is considered to be the hottest decade in human history and, according to the World Meteorological Organization (WMO), was marked by “extraordinary heat, glacier melt and a worldwide rise in sea levels”. At the turn of the year 2019/2020, climate scientist Kate Marvel summed up the situation as follows: “This is the decade in which we knew we were right. It started with the warmest year on record; This record was broken at least five times afterwards. Carbon dioxide in the atmosphere has reached unprecedented levels since humans were hominins. There were droughts and floods and brutal heat waves. Coral reefs turned white and gave up. Australia is subject to the drought. The Amazon is on fire. "

The death of the greengrocer Mohamed Bouazizi , who tried to self- immolate to protest against the government's humiliating practice, sparked weeks of mass unrest in Tunisia on December 17, 2010 , as a result of which President Zine el-Abidine Ben Ali was ousted and forced to flee . In the months that followed, the uprisings spread across large regions of North Africa and the Middle East, also known as the Arab Spring . In Egypt, Libya and Yemen, too, the heads of state there are overthrown or resigned, while the unrest in Syria has resulted in a civil war that continues to this day .

Against this background, and not least with regard to the growing threat posed by the Islamic State , more and more people are making their way across the Mediterranean to Europe, which in the middle of the decade led to a Europe-wide refugee crisis and, as a result, to a strengthening of right-wing populists and populists in many EU member states -extremist parties and socio-political tensions. Right-wing populism is also growing in other parts of the world, which is particularly evident in the election of Donald Trump as US President and the election of Jair Bolsonaro as President of Brazil .

Other developments that have preoccupied world politics this decade are the ongoing Korean conflict , the massive economic crisis in Venezuela , the war in Ukraine since 2014 , the nuclear dispute with Iran , the renewed tense relationship between Russia and the United States and Brexit .

In the second half of the year, there are more and more Islamistically motivated terrorist attacks in Western European cities, affecting France, Great Britain, Belgium, Spain, Denmark and Germany. In other parts of the world, however, the risk of Islamist terrorism continues to be higher, with the Islamic State ruling large parts of Syria and Iraq from 2014 , in northern Nigeria Boko Haram perpetrated numerous brutal acts of terrorism, in Somalia Al-Shaabab , in Afghanistan the Taliban . On the other hand, attacks motivated by right-wing extremists and Islamophobes are also shaking the western world, for example in 2011 in Norway , 2016 in Munich or 2019 in Christchurch, New Zealand .

In the societies of many countries, the use of smartphones and tablets has become common in all social classes and ages over the course of the decade , and the need for stationary computers is increasingly superfluous. The influence of the new media , especially social networks such as Facebook and Twitter , has led to a change in the formation of political opinion. Provider of streaming services entered the TV market and were by their alternative consumption model that stands out each-fetched ( Stream ) of digital media over the classic TV and its transmitters distinguishes to competitors the same.

In the last few weeks of the decade, the first cases of COVID-19 began to emerge in China , without much attention outside of China.

100,000 people in Athens protest against the austerity dictates of their government, May 29, 2011

Examples of the production of renewable energy sources : biogas , photovoltaics and wind energy 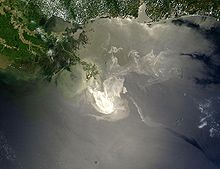 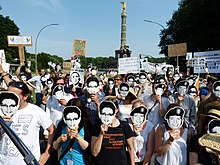 In many western industrialized countries , the conditions on the labor market have changed over the course of the decade. Normal working conditions are less, but instead increases the number of temporary employees with fixed-term contracts , elimination of social security and low wages . More and more affected people see themselves increasingly threatened by in- work or old-age poverty , the term “ precariat ” summarizes this ever-growing population group and its characteristics.

The newlyweds on the balcony of Buckingham Palace

Avengers: Endgame, released in 2019, is the most successful film of the 2010s and ever to date, with gross revenues of nearly $ 2.8 billion 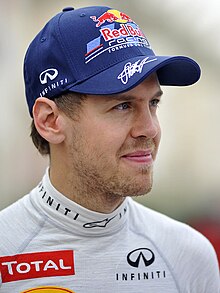 Smoke trail of the meteor from Yekaterinburg , about 200 km from Chelyabinsk