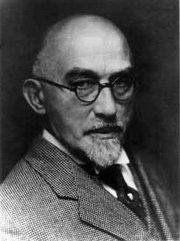 Hermann Böse (born May 4, 1870 in Hemelingen , † July 17, 1943 in Bremen ) was a German music teacher , conductor and resistance fighter against National Socialism .

Evil was born one of eight children. His father Johann Böse was the main teacher in Hemelingen, which was then still Prussian . Like three of his brothers, including Johannes Böse , he became a teacher and attended a teachers' college from 1887 to 1890 . In 1894 he joined the SPD . From 1897 to 1907 he was a teacher at the Bremen Institute for the Deaf and Mute . In 1905 Böse founded the Arbeiter-Männer-Gesang-Verein at the SPD party congress , which was widely recognized under his leadership. His intention was to bring the workers closer to music and to provide education at the same time.

He often wrote music and theater reviews for the then local SPD organ Bremer Bürger-Zeitung (BBZ). In 1907, Böse came to the Bremen secondary school , which was named after him in 2005. He taught there until 1933, when he applied to be released for health reasons. At the secondary school , Böse immediately began to build an orchestra , which in the 1920s developed into one of the largest school orchestras in Germany .

During the First World War , many party members separated from the SPD because they rejected the war and wanted to bring about revolutionary upheavals. Among them was Böse, who co-founded the KPD in Bremen in 1918 . However, he did not take on a role as a functionary and remained a teacher. In 1919 the socialist Bremen Council Republic was proclaimed. Based on his experience, Böse was appointed head of the People's Commissariat for Schools and Education. In this function, he advocated that all those involved in the educational process should have an equal say, and thus initiated the development of student self-government . During this time there were numerous complaints against the communist Böse on the part of the parents and the teachers of the school where Böse taught, apparently in protest against the developments in Bremen at the time. After the bloody suppression of the Bremen Soviet Republic, the left-wing radical “Arbeiter-Männer-Gesang-Verein” was no longer allowed to belong to the SPD, since the then ruling majority Social Democrats ( MSPD ), under Friedrich Ebert as Reich President and Gustav Noske as Minister for the Military, Right Freikorps had ordered.

In the late 1920s, Böse became close friends with the anarchist Erich Mühsam .

After he left school in 1933, the Nazis cut his pension. From then on he earned his living as a private music teacher. After the seizure of power of Hitler were in Bremen six communist and social democratic teachers laid off, and the "workers' Men's Singing Club" broke up by force.

To this day, Böse is considered a resistance fighter of the KPD, although in the Gestapo files until 1933 he was included in the Free Workers' Union of Germany (FAUD). In the summer of 1942, a meeting with the communist resistance group Bästlein-Jacob-Abshagen from Hamburg took place in his apartment . Böse also fell victim to a wave of arrests by the Gestapo against this group in 1943. He is said to have distributed illegal writings by the group around Harro Schulze-Boysen and Arvid Harnack and to have failed to comply with the “duty” to report a friend who is said to have read a solidarity letter from Moscow from the CPSU to Hamburg and Bremen communists. The letter contained plans and assessments from Moscow. Böse and his fellow prisoners were interrogated by the Gestapo and questioned about the content of the letter, but unsuccessfully. Many members of the Bästlein-Jacob-Abshagen group were sentenced to death and executed.

Böse was deported to the Mißler concentration camp . A fellow prisoner said of him: "Hermann Böse radiated a dignity that even impressed the SS sheikhs." It is said that some worker singers in a corner there sang the hymn Let us stand together like brothers… . On July 15, 1943, on the recommendation of the prison doctor, Böse was discharged seriously ill. He died two days later.

The pedagogue and writer Heinrich Böse (1875–1957) and the elementary school teacher Johannes Böse, who founded the Pencil Art Association Hamburg in 1925 , were Hermann Böses brothers.

In 1947, MP Max Schimmeck from the Communist parliamentary group applied to the Bremen citizenship to name the school where Böse had taught after him, to attach a picture or a bust in a clearly visible manner, and every year on the anniversary of the death of the school's name-bearer in a memorial hour to point out. The last two points were accepted. The renaming of the school was rejected in 1947 because the school deputation decided, based on bad experience with the Third Reich , to no longer name schools after personalities. The KPD then applied for the street in front of the school to be named after Böse. This application was accepted and the school was now called "Gymnasium an der Hermann-Böse-Straße". It was not until 2005, 58 years later, that the grammar school was officially named after Böse.