The X-Files - The FBI's Creepy Cases

The X-Files - The FBI's scary cases (original title: The X-Files , English for The X-Files ) is an American television series that was initially broadcast from 1993 to 2002. In the style of a detective series are science fiction - Fantasy - and horror elements interconnected; the series is therefore considered an important founder of the mystery genre in its current form.

By 2002 there were 202 episodes in nine seasons. In January 2016, the series continued with a six-episode tenth season , which had originally been announced as a stand-alone television miniseries . From January 3, 2018, the eleventh season was shown on the US broadcaster Fox.

The focus is on FBI agents Dana Scully and Fox Mulder , who are supposed to clear up mysterious cases under their supervisor, FBI Assistant Director Walter S. Skinner . At the beginning of the plot, Drawn in the pilot episode , Scully and Mulder meet on their first fall together. Medic Scully was made Mulder's partner to better monitor his work. Mulder and Scully have different ideas about their work: Mulder is convinced of the existence of aliens and UFOs and also adheres to conspiracy theories . Scully, on the other hand, thinks and works according to scientific methods and therefore often questions Mulder's ideas.

The series operates a mixture of thematically independent "monster-of-the-week" episodes and the pursuit of a red thread that describes a conspiracy between powerful politicians and aliens. These include recurring series internal references and a continually-increasing number of secondary characters such as " The Lone Gunmen " (Engl. "The Lone Gunmen"), "the smoker" (Engl. "The Cigarette-Smoking Man" and "CSM" , English "You Cancer" called.) or the undercover agent Alex Krycek . The core of the conspirators, the consortium or syndicate , is at the service of extraterrestrials, for example through secret medical experiments, to support their planned invasion and to secure their own survival in exchange. An insurrection on the part of the aliens, which occurs in connection with UFO abductions and events around Area 51 , leads to another conflict within the series. The roles of the various characters in the planned alien invasion only become clear over time, while new characters and threads expand the overall picture again.

Mulder knows about the conspiracy and wants to expose it publicly. He hopes to solve the disappearance of his sister Samantha and to find her alive. Scully's connection to the conspiracy comes from her abduction by strangers early in Season 2 and the murder of her sister Melissa. In the further course of the series it is alternately Mulder and Scully, partly interwoven with FBI colleagues and other characters who pursue the conspirators, sometimes driven by skepticism, sometimes driven by dismay. At the same time, this fixation on a conspiracy is also caricatured self-deprecatingly within the series, for example when the main characters repeatedly accuse each other of obsession and absurd theories.

FBI agent Fox William Mulder was born on October 13, 1961 to William and Teena Mulder. There are indications at individual points in the series that CGB Spender could be Mulder's biological father, but this is only confirmed in the 16th episode of the 9th season. Mulder studied psychology at Oxford University and was top of the class. After graduating, he worked as a profiler for the FBI. In 1991 he was assigned the X-Files, for which he developed a passion that is repeatedly expressed in the series.

Dana Katherine Scully is also an agent with the FBI , a colleague of Mulder, and also studied medical science specializing in forensic medicine . Dana Scully was born according to the script on February 23, 1964 to William and Margaret Scully. She has an older brother (William Scully Jr.), a younger brother (Charles Scully) and an older sister (Melissa Scully). Scully's father died of heart failure in 1994. Scully became Mulder's FBI partner in 1993. Originally, she was supposed to monitor Mulder's work on the X-Files and, if possible, discredit it. In contrast to her colleague Mulder, Scully follows scientific methods and emphasizes that even for apparently inexplicable incidents, there must always be a natural explanation. The agent grew up in a Catholic home and is a devout Catholic . She was kidnapped, and tests and experiments were carried out on her. Her colleague Mulder suspects she was kidnapped and brought back by aliens. There was a sophisticated computer chip on Scully's neck, after the removal of which she developed an incurable cancer , the progression of which could only be stopped by another computer chip found by Mulder, and she has been in remission ever since . Scully had a daughter named Emily who was artificially conceived in a laboratory without her knowledge . Their daughter died of an unknown illness. Her sister Melissa was also murdered while working on the X-Files and trying to uncover the conspiracy. As time goes on, Scully learns, even if it is difficult for her, to become more open to extreme possibilities and psychic explanations. From their relationship with their colleagues also comes their son William, whom they - to protect him - have to give up for adoption in the 9th season.

The X-Files was from the synchronous company Cinephon worked in Berlin, where even the series title to The X-Files was located. The dialogue book was written by Horst Müller in the first nine seasons; the lyrics of the 10th season are by Klaus Bickert and Pierre Peters-Arnolds . Dialogue direction was directed by Peter Baumgartner in the first season, Norbert Langer in thesecond to ninethseason and Pierre Peters-Arnolds in the 10th season.

In the 10th season, Mulder received his third speaker in Sven Gerhardt. The reshuffle was already heavily criticized in advance.

In order to receive an FSK -12 approval and thus to receive a broadcast approval in Germany in accordance with the Youth Protection Act before 10 p.m., many episodes were also re-censored. The reruns in the night program were usually broadcast without post-censorship.

a Rank within the FBI
b Main role, but not in every episode
c Although Duchovny appears in episode 8.15, he is not featured in the opening credits.
dYoung cancer candidate in two episodes of the fourth season: Thoughts of the mysterious smoker and demons
e Just for Chris Owens' role as a young cancer candidate

Jill Hennessy was also shortlisted for the role of Dana Scully , which is alluded to in her series Crossing Jordan .

In 2000 David Duchovny withdrew from the series, but continued to make guest appearances to keep the thread running; Scully was assigned FBI agents John Doggett and Monica Reyes . Duchovny's series exit had a negative impact on viewership and contributed to the preliminary end of the series after the 9th season in 2002.

Guest directors with 1-6 episodes for the series in alphabetical order: 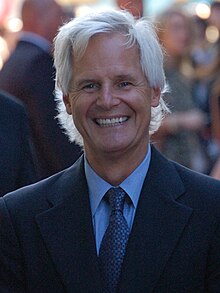 Vince Gilligan (Photo: 2013) was one of the writers and producers of the television series alongside Carter

The X-Files - The Movie

→ Main article : The X-Files - The Movie

In 1998 , the first feature film based on the X-Files series was made, which is based on the plot in the first five seasons and includes the sixth season in its story arc. In Germany, the film started in cinemas after the fourth season due to the synchronization-related shift in the broadcasting of the series. In the chronology of the series, the film takes place between the finale of the 5th season (5.20 The End) and the start of the 6th season (6.01 The Beginning).

In addition to the characters known from the series, renowned actors such as John Neville , Blythe Danner , Glenne Headly , Armin Mueller-Stahl , Terry O'Quinn and Oscar winner Martin Landau appeared. Directed by Rob Bowman . It was the first time that a television series turned into a cinema film while the series was still running. It is also unusual for the actors from the series to continue their roles on the screen. At $ 60 million in production costs and grossing approximately $ 190 million, the film is considered a commercial success.

The X Files - Beyond Truth

For a long time it was questionable whether a second movie would be made, as even Chris Carter did not give any precise information about it. However, David Duchovny was interested in another movie from The X-Files , as he himself said: "I would love to slip into the role of Fox Mulder again ." Gillian Anderson also signaled her interest in a second film from the start.

At the beginning of April 2007, Duchovny confirmed that a second part was in the works. Both he and Gillian Anderson would play their usual roles. Chris Carter and Frank Spotnitz wrote the script for the second X-Files film. Shooting began in December 2007 in Vancouver (with a short Christmas break) and ended in mid-March 2008. The film was released in Germany on July 24, 2008. In the USA, the film opened one day later. The English title of the film is X-Files: I want to believe , the German title is X-Files - Beyond Truth .

Revival of the television series from 2016

In March 2015, Fox announced that there would be a new six-episode television miniseries . The original leads, David Duchovny and Gillian Anderson , will take over their old roles. Series creator Chris Carter is also back on board. The actors of Assistant Director Skinner ( Mitch Pileggi ), the "Smoker" ( William B. Davis ) and agent Monica Reyes ( Annabeth Gish ) have also confirmed. Filming began on June 8, 2015 in Vancouver . The new episodes began broadcasting on Fox on January 24, 2016.

The German-language premiere of the new season began on February 3, 2016 on 3+ . One day later it started on ORF one and four days later on ProSieben .

In May 2016 it was indicated at a press conference of the broadcaster FOX that a new season was to be expected. All actors should be there. The continuation for the TV season 2017/2018, which starts in autumn 2017, is planned. The plan to implement an 11th season was officially confirmed in August 2016, again by David Madden and Dana Walden from FOX, on the TCA press tour. Meanwhile, FOX has also confirmed the 11th season with 10 episodes, the shooting of which began in Vancouver in August 2017.

For season 10 of the TV series, the comic series The X-Files Season 10 was also released in April 2013 by IDW Publishing and follows on from the events of the second movie. It is written by Joe Harris while Chris Carter is executive producer. The series has been set up for 25 issues, a sub-series with five episodes called The X-Files: Year Zero has been published since July 16, 2014 and, although playing in the present, deals with the beginnings of the X-Files. The author is Karl Kesel , the pictures are by Vic Mahlhotra and Greg Scott. Chris Carter is again Executive Producer.

2016 admission to the Science Fiction and Fantasy Hall of Fame

References to films and other series

Influences on the series

Allusions in other films and series

The German first broadcast of the series took place from September 5, 1994 to February 24, 2003 on ProSieben. Since then, the series has been repeated several times on other channels in Germany:

The series has been running at ProSieben MAXX since February 11, 2014 .

In addition to the cinema films, there were some other films on VHS and DVD / Blu-ray , but these were composed of double episodes and a few of triple episodes. Since they span the entire series and follow both the Alien storyline and the so-called Monster of the Week, this collection can be understood as a summary of the entire series. The films are composed as follows (the official production code in brackets and the German episode titles are always given in an episode guide for orientation):

Existence was the first film to be released on DVD. The older films were never republished on DVD.

The first nine seasons of the series have also appeared in multiple editions as DVD boxes. A limited edition Blu-ray Complete Collection (seasons 1–9) has been available in stores since December 12, 2015. There are now boxes with all 11 seasons.