Alum is a redirect to this article. For aluminum sulphate, which is incorrectly referred to as alum in paper production, see there.

Alums always have the composition M I M III (SO 4 ) 2 12 H 2 O , where M I monovalent metal cations such as the alkali metals sodium , potassium, rubidium and cesium - with the exception of lithium , since it cannot be incorporated without loss of stability - Thallium or ammonium and its organically substituted derivatives can be; M III can be the following triple positively charged metal cations: aluminum, gallium , indium , titanium , vanadium , chromium, manganese , iron , cobalt , rhodium , iridium and sometimes also thallium. The typical alums are those with aluminum, chrome and iron. All alums crystallize in the cubic system , mostly in the octahedral shape and always with 12 molecules of crystal water . Furthermore, only two very unstable alums of sodium are known, aluminum and chrome alum.

Potash alum as a mineral found in Utah

A crystal made from ammonium iron alum

Extinguishing bomb : The mixture of fine alum powder and a little gunpowder was ignited by a sulfur thread at the opening (around 1700)

The Egyptians already used alum as a flame retardant for wood. The pieces found date from 450 BC. The Romans also used it for this purpose and added vinegar to it . They also used it as a deodorant : "It removes the stench under the armpits as well as the sweat".

Alum was also used in alchemy around the 11th century.

During the 14th and 15th centuries, the Florentine Medici family had the sole right to remuneration for this mineral, which is necessary for dyeing cloth . Together with the church, she ran the first European alum plant in Tolfa .

In 1578, the banker Horatio Palavicino , who had converted to Protestantism , whose family administered the papal alum monopoly, sold the entire stock in exchange for a promissory note signed by Queen Elizabeth of England for £ 29,000 and the granting of the import monopoly to the Dutch. England had long suffered from the fact that the monopoly at that time lay with the Papal States and the imports, which were important for the cloth industry for fixing the colors, were hindered after the separation of the Church from England under Henry VIII. After that, prospecting was also carried out in their own country and Thomas Chaloner built up his own alum industry in Yorkshire from 1607 based on alum slate. 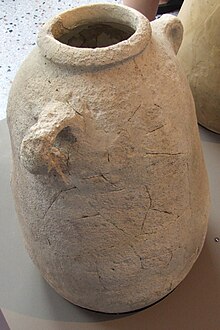 In this Roman amphora , found in Bliesbruck , alum was transported from the Aeolian Islands for dyeing wool. Pompeii exhibition 2007, European Culture Park Bliesbruck-Reinheim

For the production of potash alum, lightly fired clay , if possible iron-free, is treated with 50% sulfuric acid in the heat. Aluminum sulfate (historically: sulfuric alumina ) is formed with the separation of silica .

After dilution with water and removal of the insoluble residue, the silica, potassium sulfate or chloride is added. The alum flour, which separates out as a fine powder, is purified by recrystallization from hot water. Similarly, bauxite or cryolite can also be used.

Production in alum factories (19th century): In some areas, for example near Schwemsal in what is now Saxony-Anhalt (near Bad Düben in Saxony), alum was made from roasted and depleted alum slate . Here, the roasted pyrite provided the necessary for the formation of aluminum sulfate sulfuric acid and clay minerals aluminum. Potassium was usually added as potassium carbonate (K 2 CO 3 ) (potash). The removal of iron was effected by appropriately choosing the concentration of the solution.

The mineral alum stone or alunite , a basic potassium aluminum sulfate, occurs at Tolfa in Italy and at Munkács in the (formerly Hungarian) western Ukraine . This material was roasted and leached with hot water, which left insoluble clay , while all the components of the alum went into solution and, on cooling, separated into slightly reddish-colored crystals, usually made of finely divided iron oxide . 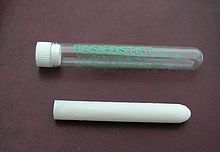 In the tannery , alum is used to cook the hides white, in the calico printing and in the fabric dyeing they are used for pickling ( see also dye plants ). It is also used for waterproofing materials that are then drawn off by oleic acid , for clarifying liquids, etc. In many cases, the alum must be completely free of iron , the presence of which is proven by means of blood lye (blue color). In papermaking, dyeing and white tanning, aluminum sulphate is now often used instead of alum itself, which is why it is often referred to as concentrated alum.

Alum is also used to make modeling clay. The most common application in daily life is the alum stick , which is used as an astringent to stop bleeding. But alum is also used in gardening. Here hydrangeas are fertilized with alum to give the flowers a purple or blue color. In Thailand, for example, it is added to the water to bind the suspended matter in it and to clarify the earthy water. It is also used as a deodorant (French: Pierre d'Alun ). The alum is soaked and applied to the areas to be deodorized. Alum powder ( Chinese  明矾 粉 , pinyin míngfánfěn ) has been used in China for centuries to make the fried breakfast pastry Youtiao ( Chinese  油条 , pinyin yóutiáo ).

Potash alum, KAl (SO 4 ) 2 · 12 H 2 O, contains 45.5% water of crystallization , forms colorless, transparent, sometimes very large crystals , which only develop into a fine, white, opaque membrane after prolonged exposure to air coated with weathered substance , tastes bitter and at the same time sweet and can be harmful in larger doses. The specific weight is given by Kopp as 1.924. When heated, the alum initially melts in its crystal water and finally leaves behind a loose, white, opaque mass called burnt alum (Alumen ustum). Its solubility is very high in hot water and very low in cold water, so that it can be prepared in pure form with relative ease; the solution is acidic. The most common crystal form is the octahedron, where the cube surfaces sometimes appear blunted. This is especially the case with Roman alum, which used to be valued for its purity and was therefore also called cubic or cube alum. The cube shape can be achieved by adding potash ( potassium carbonate ), soda ( sodium carbonate ) or ammonia to the hot, concentrated solution until a permanent precipitate forms, and only then allows it to cool. Such crystals are called neutral or truncated alum and, from a chemical point of view, are basic salts.

There are also a few selenates SeO 4 2− , which correspond in their crystal structure to the alums. Such compounds are known with the large ammonium , rubidium and cesium ions as alkali components. The general formula is M I M III (SeO 4 ) 2 · 12H 2 O (M III = Al, Ga, Fe, Cr, Rh, Ir).