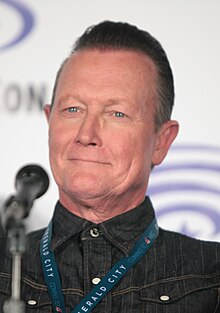 Robert Hammond Patrick, Jr. (born November 5, 1958 in Marietta , Georgia ) is an American actor and producer. He was best known for the role of T-1000 in Terminator 2 - Judgment Day .

He began his career in around 90 film and television productions under the direction of Roger Corman . In his film Warlords from Hell (1987) he played a biker who belongs to a gang. After Equalizer 2000 , films such as Jungle Force and Future Hunters followed , in which he played leading roles. After other independent productions such as Killer Instinct , the sequel to Jungle Force , where he also met his future wife Barbara Hooper, he played a supporting role in a Hollywood large-scale production for the first time in 1990: Die Hard 2 with Bruce Willis .

A year later, James Cameron gave him the role of the rival Terminator T-1000 in Terminator 2 - Judgment Day . In the action film Decoy - Deadly Order (1995) he played alongside Peter Weller . Patrick played a gambling addict school friend of the protagonist Tony Soprano's in the hit series The Sopranos . Also in 2000, Patrick joined the TV series The X-Files - The FBI's Creepy Cases as the new lead actor and played special agent John Jay Doggett alongside Gillian Anderson in both seasons 8 and 9 until production of the series was discontinued in May 2002.

In the biopic Walk the Line (2005) directed by James Mangold he was seen in the role of the father of Johnny Cash , in the same year he played the father of Elvis Presley in the television film Elvis . He played alongside Harrison Ford in the thriller Firewall and took on a role in the 2006 WWE- produced action film The Marine . In the television series The Unit , Patrick had one of the leading roles as Tom Ryan from 2006 .

Various appearances in series such as Burn Notice (2010) or films such as Gangster Squad (2013) followed. He was also part of the main cast in the short-lived submarine series Last Resort . From 2014 to 2018 he played the agent Cabe Gallo, who is a special agent at Homeland Security , in the television series Scorpion . Robert Patrick's brother is the musician Richard Patrick .